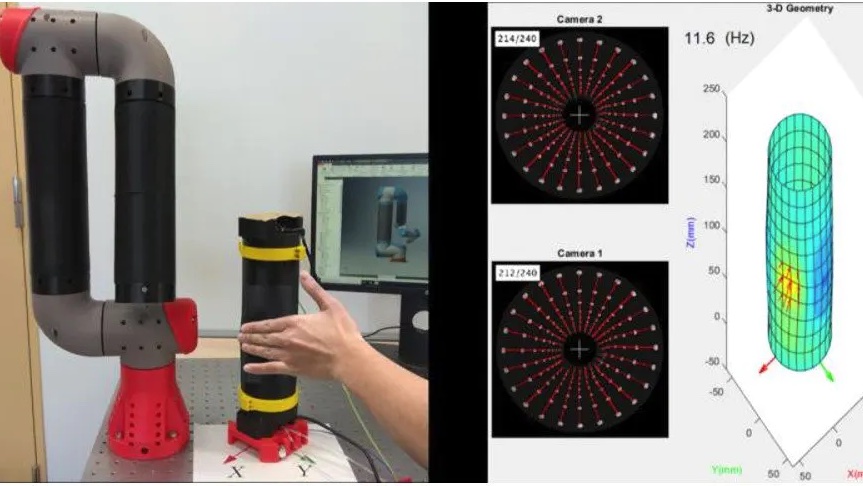 Modern-day robots are often required to interact with humans intelligently and efficiently, which can be enabled by providing them the ability to perceive touch.

However, previous attempts at mimicking human skin have involved bulky and complex electronics, wiring, and a risk of damage.

In a recent study, researchers from Japan sidestep these difficulties by constructing a 3D vision-guided artificial skin that enables tactile sensing with high performance, opening doors to innumerable applications in medicine, healthcare, and industry.

Robots have come a long way since their original inception for high-speed automation. Today, robots can be found in a wide variety of roles in medicine, rehabilitation, agriculture, and marine navigation. Since a lot of these roles require human contact, robots are expected to become adept at interacting with humans in a safe and intelligent manner.

One way to accomplish this goal is by endowing robots with the ability to perceive touch. Accordingly, attempts have been made to develop artificial “skins” capable of inducing tactile sensations and allowing robots to be more aware of their surrounding environment, in the same way humans are.

However, despite great advances in tactile sensor technology, the endeavor remains challenging.

“The main challenge lies in mimicking the inherent complexity of natural skin structure that has a particularly high density of mechanoreceptors with specialized functions such as sensing pressure, vibrations, temperature, and pain,” says Associate Professor Van Anh Ho from Japan Advanced Institute of Science and Technology, where he leads a laboratory working on soft haptic technology.

He adds, “All approaches so far have only focused on developing a skin-like structure with a matrix of different sensors without considering the bulk of wires, electronic components, and the risk of damage from frequent contact.”

In a new study published in IEEE Transactions on Robotics, Professor Ho and his colleague Lac Van Duong, a doctoral student at JAIST, developed a high-performance, vision-based artificial sensing system that is low-cost, has a relative simple structure, and is scalable.

Named TacLINK, this system can process tactile information and even determine contact force and contact geometry upon interacting with the surroundings.

The researchers based the structure of TacLINK essentially on a transparent acrylic tube (serving as a rigid bone frame) covered by a continuous soft artificial skin with a sensing area of about 500 sq cm.

They used silicone rubber to fabricate the artificial skin due to its high elasticity and smoothness. Moreover, the material could be inflated to change its form and stiffness.

The researchers printed an array of markers on the surface of this skin to track its deformation instead of embedding sensors or electronic components inside the skin. This greatly reduced its bulkiness, cost, and chances of possible damage.

The vision system consisted of two co-axial cameras arranged to form a stereo camera that tracked the 3D displacement of the markers on the inner wall of the skin. In addition, researchers employed a finite element model (FEM) to estimate the structural stiffness of the skin.

By combining the data from both these sources, they were able to reconstruct the contact geometry and contact force distribution simultaneously. Moreover, unlike in previous studies, this method worked for multiple contact points.

With such positive outcomes, Professor Ho is hopeful about the creation of a future generation of touch-sensing-enabled robotic devices.

“The artificial skin used in our study can be easily fabricated by the casting method and can, therefore, be implemented on other parts of robots, such as fingers, legs, chests, and heads, and even for smart prosthetics for humans, allowing a disabled person to perceive sensations the same way as a normal human,” comments Professor Ho excitedly.

“In addition, it can also be used to design various sensory devices in medicine, healthcare, and industry. In fact, it is especially suited for the development of robotic systems in the post-Covid era to enable remote service with robotic avatars.”

It certainly seems like the robots of the near future will be “touching” human lives more than ever before.