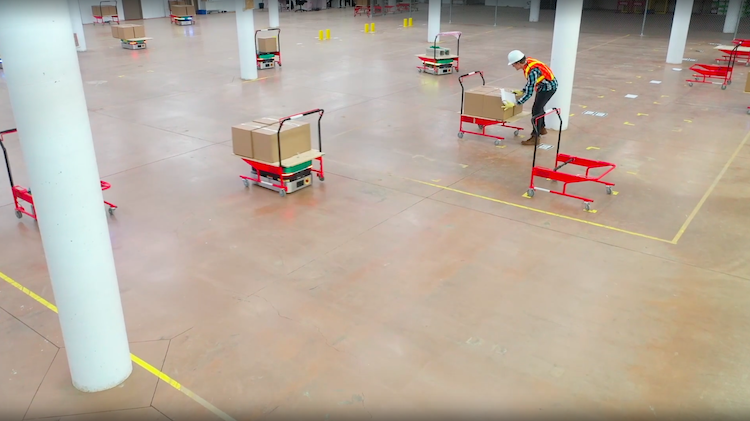 For a number of years now, Autonomous Mobile Robots (AMRs) have been considered a promising technology for improving the resilience of manufacturing operations.

In the context of manufacturing, resilience means agility – the ability to react to and adapt to change at speed, whether it be in response to fluctuations in demand, market conditions, supply lines, the availability of labor, or otherwise.

The COVID-19 pandemic has tested the resilience of manufacturing operations worldwide like never before.

Yet in the midst of the turmoil created by the biggest global crisis in 75 years, mobile robotics has been singled out as one of the most promising of all emerging technology sectors, offering a vital tool in the race amongst manufacturers to adopt COVID-safe, flexible, and digitized working practices.

Yet for all the optimism, manufacturing firms rightly ask one crucial question about AMR adoption – where’s the evidence that it will have the promised impact on my operations?

As an AMR vendor, we have had to put our hands up and concede that, to date, there have been few examples of AMRs being deployed at scale within manufacturing facilities.

While there are plenty of examples illustrating the benefits of small deployments, the business case for full-scale adoption by large firms has been lacking robust evidence.

Until now, that is.

A World-First for AMRs

The project involved the deployment of the OTTO Materials Handling Platform to provide the backbone of advanced manufacturing and eCommerce intralogistics at an F500 company. It took place over two sites, a brownfield and a greenfield.

Brownfield deployment at an existing 700,000 square foot facility, half of which was given over exclusively to the use of AMRs to provide transport of raw material pallets, work in progress pallets, and finished goods pallets in place of forklifts.

Greenfield deployment at a brand new 1 million square foot facility, where AMRs were deployed exclusively in a 400,000 square foot area to collect materials from human pickers to take to automated machining cells, and also to perform autonomous collection of materials from automated cells.

By relying 100% on AMRs within the dedicated zones, PULSE was able to carry out a robust cost-benefit analysis in comparison with manual handling (use of hand carts or carrying good), forklifts, conveyors and also with Automated Guided Vehicles (AGVs), which run on tracks and therefore don’t offer the same freedom of movement as AMRs.

The findings were unanimously in favor of AMRs. At the brownfield facility, PULSE found the OTTO 1500 platform worked out at just 20% of the equivalent operating costs of forklifts.

This was based on the calculation that a single unit operating around the clock, 24 x 7 x 52, cost $40-50k per vehicle per year. The equivalent cost of a single driver working 4.2 shifts per week, plus the forklift lease, comes in at $200-280k.

At the greenfield facility, PULSE deployed OTTO 100 units managed by the OTTO Fleet Manager IoT system. With an average cost of $15-25k per vehicle, the OTTO 100 represents just 10% of the labor costs of human drivers when compared on a 1:1 basis.

In comparison with AGVs, PULSE found that the overall productivity of the OTTO 1500 units was broadly similar and that AGVs even showed some advantage in wide-open spaces.

However, in the tight, narrow spaces of a compact facility, the smaller footprint and better maneuverability of the OTTO 1500 showed clear performance benefits.

Freed from fixed paths and guideways, the AMR is, for example, able to navigate independently around obstacles and pedestrians and can maneuver flexibly within the footprint of a pallet.

This makes it much more efficient when operating with work cells or production machinery. Overall, PULSE calculated that this gave the OTTO 1500 a 66% cost efficiency advantage compared to an equivalent AGV system.

Compared with conveyors, meanwhile, which operate in fixed positions that cannot easily be rerouted as demands change, PULSE calculated that a single OTTO 100 unit could do the work equivalent to a 250 LF conveyor.

This worked out as a 50% cost saving, although this was based on optimum loads. When conveyors, as so often happens, are sub-optimally loaded for throughput or when loading only happens sporadically, the cost benefits of the AMR can be even higher.

Finally, as well as significant cost efficiencies, PULSE’s analysis revealed that ROI on AMRs at this kind of scale could be as little as a year.

With payback driven by labor savings, increased productivity and efficiency, enhanced ergonomics, improved safety, lower capital costs (compared to conveyors) and the opportunity for more compact facility design (compared to AGVs), PULSE calculated that ROI for large scale deployments on system lease could be under 12 months.

Using vehicle-only lease, this would push up to 12-24 months, while upfront capital purchases would be typically paid for in two years or less.