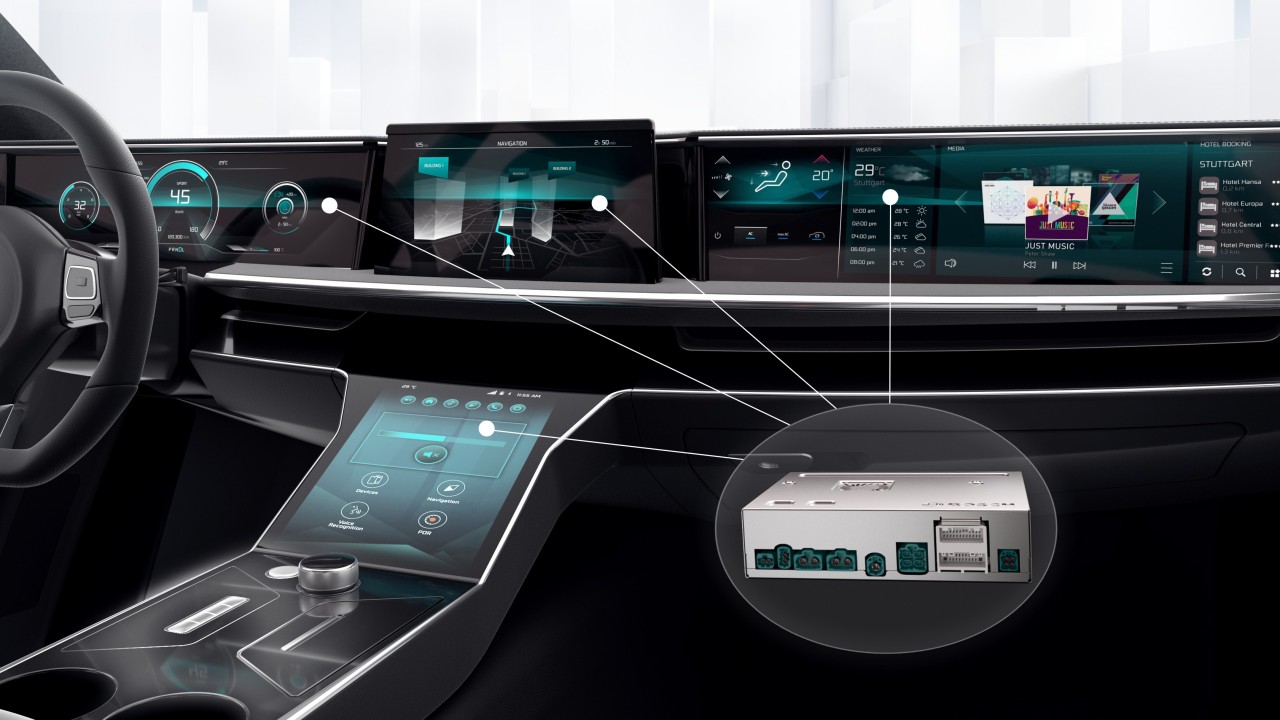 Automotive technology giant Bosch says it is winning orders worth “billions” for vehicle computers. Cars today each integrate hundreds of computer chips of various kinds, but few have central computers on board (see image below).

In modern cars, intelligence counts for a lot, and Bosch says its vehicle computers are there to provide it. These computers, the new all-rounders of automotive electronics, are incorporating ever more functions of individual control units into central, highly powerful electronic modules.

For more than a year now, Bosch vehicle computers have been controlling functions such as driver assistance systems and motion in production vehicles. And soon, they will be joined by central computers for cockpit functions and body electronics.

When it comes to vehicle computers, therefore, no other company can match Bosch’s broad portfolio, since the supplier of technology and services can offer production-ready computers for every aspect of modern vehicles.

And business-wise as well, this is paying off. Bosch has now won orders worth several billion euros for its vehicle computers – €2.5 billion worth since this past summer alone, claims the company. 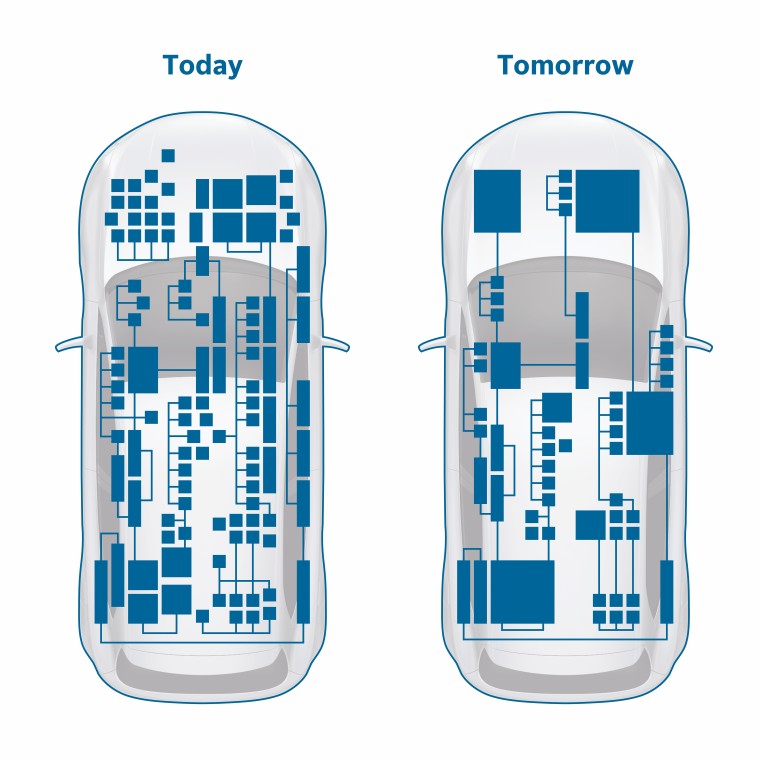 “Vehicle computers have huge business potential for Bosch. Even now, our high-performance computers mean that automakers view us as one of their leading engineering and technology partners,” says Harald Kroeger, who sits on the board of management of Robert Bosch.

Vehicle computers are central to Bosch’s efforts to extend its leading role in software-intensive electronic systems.

The market for these systems is worth some 20 billion euros, and is set to grow 15 percent annually between now and 2030.

To meet this demand, the new Cross-Domain Computing Solutions division and its 17,000 associates will start operations in January 2021. In this unit, Bosch is bringing together its hardware and software engineering for vehicle computers, sensors, and control units for all vehicle domains.

Automotive electronics is getting fit for the future

In the future, high-performance control units will be a must-have for all cars. These central nodes are where all the car’s “nerves” converge.

Thanks to their prodigious computing power of several billion operations per second, central computers are even capable of processing the big data needed for automated driving, data-based services, and permanent software updates.

According to McKinsey, software’s share in the value of a vehicle will rise from just 10 percent today to 30 percent in the future. This development underscores how important bits and bytes will be for vehicles in the future.

And vehicle computers that can handle such software functions and data volumes will therefore soon be a standard feature in all vehicles, whether compacts, premium sedans, or 40-ton trucks.

Bosch is developing computers for cockpit and connectivity functions, for driver assistance systems and automated driving, and for the powertrain and body electronics.

This means it will be possible to concentrate control over all central vehicle functions in just a handful of high-performance central computers. Take the information domain computer Bosch is developing.

In the next vehicle generation, it will assume the tasks done by as many as ten control units. Some vehicles now feature more than 100 control units in total, and this development will allow automakers to significantly reduce this number.

“Vehicle computers are the key to significantly reducing the complexity of electronic systems, and to making them as secure as possible,” Kroeger says.

In the vanguard of automotive electronics

In the years ahead, vehicle computers will be entrusted with tasks from different parts of the vehicle – or domains, as the experts call them. When this happens, just one central computer will be responsible for controlling not only vehicle motion, but also body electronics, say.

Such central computers will then be all the more powerful: over the past 20 years, the computing power of a control unit originally intended for navigation has grown by a factor of 3,000. This is almost three times the increase predicted by Moore’s law, which states that computing power doubles every two years.

The result is that a modern cockpit computer can control not only displays, infotainment, and voice commands, but also the tasks of other domains, such as certain assistance functions.

“Bosch vehicle computers will make it possible to master even highly complex driving functions across individual vehicle domains,” says Dr. Mathias Pillin, who will be assuming the position of president of the new Cross-Domain Computing Solutions division from January 2021.

The new division’s name is no coincidence. Here, under one roof, Bosch will be pooling its capabilities in software, electrical, and electronic engineering from the domains of driver assistance and automated driving, car multimedia, powertrain, and body electronics. 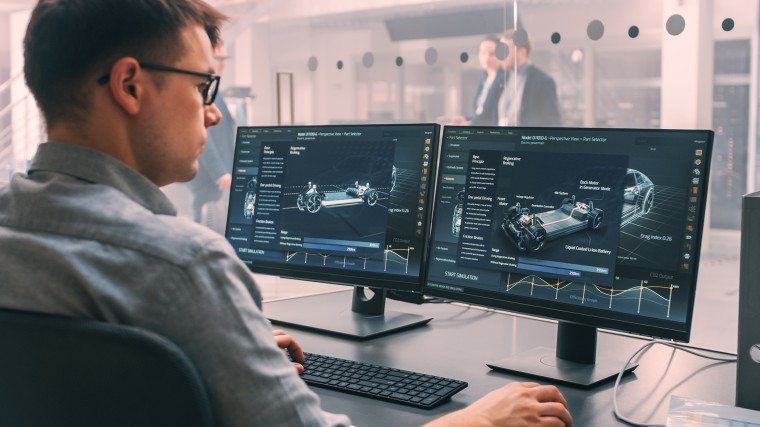 Bosch offers its vehicle computers as a scalable kit that contains the right electronic system, including hardware and software, for all requirements and conditions.

The ultimate aim is a software and systems architecture for the entire vehicle, in which all central computers, sensors, and control units are perfectly compatible with each other.

For automakers, the benefit of such a modular design is that it gives them extra flexibility when developing vehicle computers for different vehicle models.

If, for example, a fundamental architecture has been defined for hardware and software, the computer can be designed along those lines, according to customer wishes.

In the case of a premium vehicle, additional functions can be provided by adding extra software modules or special chips to the printed circuit boards. In the case of a compact vehicle, the structure of the vehicle computer can be modified so that it provides central control over basic safety-relevant functions.

“Our modular design for vehicle computers and our broad portfolio mean that Bosch can cater to all automakers’ needs,” Pillin says.

This design principle also means huge business potential for these high-performance computers, since it will allow Bosch to tap into an enormous market.