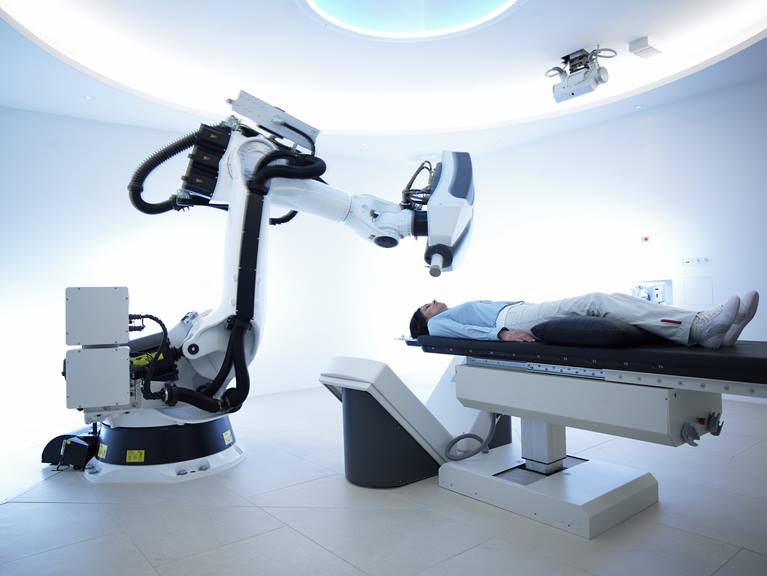 A Munich therapy center uses a medical product with an integrated Kuka robot as a high-precision instrument in tumor treatment.

The CyberKnife system of Accuray, a kind of virtual knife, is an alternative to conventional radiotherapy.

Thanks to high-precision robot- and image-guided irradiation, the CyberKnife Center in Munich is able to treat tumors anywhere in the body – from the brain to the spinal column to various organs, such as the lungs, liver, kidneys or prostate.

Professor Dr Alexander Muacevic, radiosurgeon and neurosurgeon at the CyberKnife Center Munich, says: “With this system, we perform radiosurgery – that is, a treatment that applies radiation with the utmost precision.

“Thanks to the integration of an image guidance system with robotic technology, we achieve accuracy of less than a millimeter.” 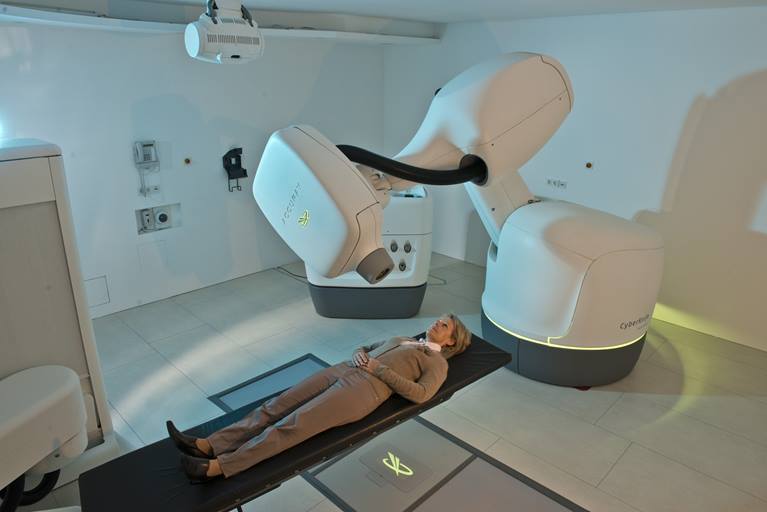 First of all, image data are generated by means of computer and magnetic resonance tomography and then loaded. The doctor tells the medical physicist what dosage to use for irradiation of the tumor.

On the basis of this information, the medical physicist then creates a treatment plan that is transferred to the software.

The treatment is subsequently started and is executed fully automatically. This is where the Kuka robot in the CyberKnife system of the medical product manufacturer Accuray comes in.

Professor Muacevic says: “I always compare it with a pilot in the cockpit who also switches very quickly to autopilot.

“For us physicians, the main job is now already done; we merely monitor the patient jointly with the medical technicians. The actual work is carried out by the CyberKnife system autonomously – with a degree of precision that no surgeon could match. Achieving accuracy of 0.5 millimeters manually is almost impossible.”

It is this precise targeting of the radiation that is the key benefit of the robot in the CyberKnife system. The system can be used, for example, for treating benign brain tumors, so-called vestibular schwannomas or meningiomas.

These would otherwise be removed in a six-hour operation, followed by at least a week in hospital and eight weeks of rehabilitation.

Muacevic says: “We can treat small and medium-sized tumors very well with our virtual knife, thereby obviating the need for an operation. The patient is already able to return to work the next day.”

In 2005, the Munich CyberKnife Center was opened in cooperation with the Klinikum Großhadern. Today, more than 900 patients per year are treated with the system. In Munich, the third generation of the virtual knife is already in operation.

Since last year, the CyberKnife system has also been used in Munich in the treatment of prostate cancer, the most common type of cancer among men.

Muacevic says: “As an alternative to a total operation, we can drastically reduce the treatment time from eight weeks to a single week – and it is scientifically documented that the results are at least comparable if not better.”