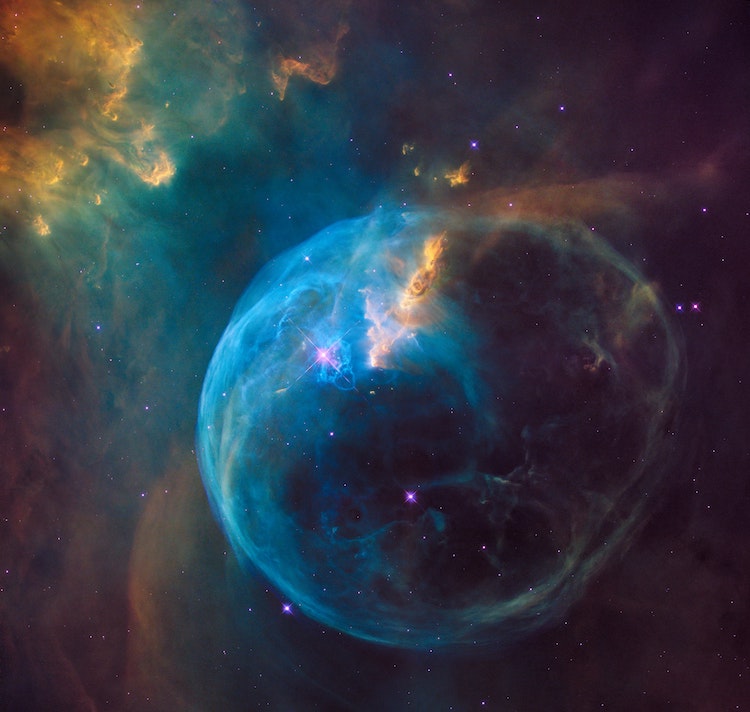 We’ve known for a long time that there is water in space. But an international team of scientists has found a cloud of water vapor 12 billion light-years away – and it’s bigger than you could possibly imagine.

The aerospace industry is as big today as it has ever been. Whether you’re an independent space company looking to put innovative satellites into low orbit, or a major government agency, it’s an exciting time to be alive.

But one question has always been at the forefront of space exploration. Scientists generally regard the presence of water as one of the prerequisites of any kind of life similar to what we have on Earth.

As a result, any probe or lander is always equipped to analyze the surface of a moon or planet in search of water molecules. Is there water in space?

The recent discovery of water on the Moon has revolutionized current theories on the satellite’s potential, especially in terms of drinking water in space.

And now, scientists have found an enormous cloud of water vapor floating in space. Located 30 billion miles away in a quasar – a massively powerful cosmic body – the water cloud is estimated to contain at least 140 trillion times the amount of water in all the seas and oceans here on Earth.

Has This Much Water in Space Ever Been Found Before?

It is genuinely difficult to get your head around the sheer scale of objects in space. The concept of 140 trillion Pacific, Atlantic, Indian, Arctic, etc. oceans, floating in space, is not easy to comprehend.

However, water in space is actually nothing that remarkable. Scientists discovered space water in the Milky Way, albeit in amounts 4000 times less than that present in the newly discovered cloud around the quasar.

However, the majority of ice found in the Milky Way is frozen, meaning that it takes up less space than that found in the quasar.

Quasars Are One of the Most Violent Phenomena in the Universe

The quasar itself is a remarkable phenomenon and one that counts as one of the most powerful things found in our search through the universe.

Quasars make our sun look like a dying candle. The one under inspection, known as APM 08279+5255, contains a black hole 20 billion times bigger than the sun, producing as much as a thousand, trillion times more energy.

The black hole at the center of a quasar is surrounded by a cloud of gas and dust, which it constantly consumes, pushing energy out into space. In the case of APM 08279+5255, the cloud contains a huge amount of water in space, which is what astronomers have found.

Though well below freezing, it is comparatively warmer than most water in space, and 300 trillion times less dense than our own atmosphere.

However, what it lacks in density it makes up for in size. The cloud of water in space covers hundreds of light years, accounting for its remarkable size.

Water in Space Continues to Feed the Black Hole

The gas cloud’s higher temperature, compared to other water in space, is accounted for by the x-rays and radiation emitted from the black hole.

These two things ensure that the water in space is constantly heated. The black hole feeds off the surrounding clouds of water in space and carbon monoxide, among other elements, and scientists estimate that if the water is a sphere in space there is enough matter surrounding the hole to feed it until it grows to six times its current size.

It’s not guaranteed that this will happen, however. Some of the gas may condense to the point where it becomes a star. Another option is that it is simply ejected from the quasar, sending water into outer space.

International Cooperation Led to the Discovery

These remarkable discoveries were made by an international team, operating close to the summit of Mauna Kea, Hawaii. The team worked from the Caltech Submillimeter Observatory, making use of a technology known as Z-Spec.

This device functions as a spectrograph and is considerably more sensitive than other similar devices.

It’s also able to cover a far bigger area than most comparable tools, a key factor in the success of identifying the massive cloud of water in space. Further analysis was made using the Combined Array for Research in Millimeter-Wave Astronomy in the mountains of California.

A second team, working in the French Alps, was able to add to the discoveries. The Hawaii team began work in 2008, and the French team made the first discovery of water in space in 2010.

Only 1/6 billion light years away

As we’ve mentioned, the discovery of water in space is nothing especially new. Its presence in the Milky Way has been known for some time, though we don’t know if outer space is filled with water.

However, the sheer volume of water present around this quasar is remarkable. Another interesting aspect of the find is that, due to its distance from Earth, this cloud of water in space is 12 billion light years away – only 1.6 billion years away from the big bang, and therefore present in the earliest stages of the universe.

That means that water has been present in our universe from the very beginning, a confirmation that can have a great deal of impact on the future work of astronomers.

It remains to be seen what further research is made possible through these finds. But they are sure to increase our understanding of what happens to water in space, as well as the workings of quasars and black holes.

Where do you see the future of research into the water in space? Let us know in the comments below!