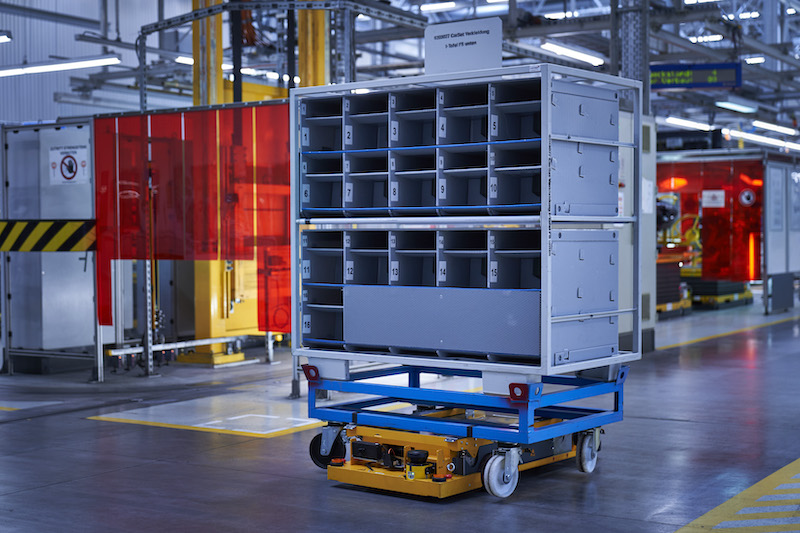 The BMW Group is breaking new ground in the field of logistics as it founds warehouse robotics company IDEALworks – a fully-owned subsidiary headquartered in Munich.

This marks the first time a major automotive brand is building and supplying what are often called autonomous mobile robots (AMRs) or automated guided vehicles (AGVs).

The aim is to become a leading supplier of autonomous robotics solutions in the logistics sector. The name “IDEAL” stands for Industry Driven Engineering for Autonomous Logistics.

Milan Nedeljković, member of the board of management of BMW responsible for production, says: “In founding IDEALworks, we are creating a new business segment for our logistics solutions. In recent years, our logistics innovation team has been working in depth on the digitalization and automatization of production logistics and has developed some unique solutions.

“The Smart Transport Robot, STR, in particular has met with great response and has seen demand from both within and outside of the BMW Group. Founding IDEALworks is now the logical next step for the BMW Group as a driver of innovation.”

Jimmy Nassif, CTO IDEALworks, says: “We are entering completely new terrain with IDEALworks. Up until now, our development has focused on automotive production and its logistics.

“Our perspective is changing now. We are becoming a provider of logistics robotics beyond the automotive industry. We are preparing some innovations for the coming months.”

Since 2015, the innovations team from BMW Group Logistics has been working on future-focused industry 4.0 solutions in the fields of virtual reality, augmented reality, indoor and outdoor logistics robots, paperless logistics and smart devices. Many of these solutions are already in series production at BMW Group production locations.

In 2019, BMW Group Logistics received the prestigious Deutscher Logistik Preis (German Logistics Award). The Smart Transport Robot and its management software were also recognized as part of this award.

The Smart Transport Robot, STR, was developed in 2015 in collaboration with the Fraunhofer Institute. The flat, autonomous and mobile robots can transport goods weighing up to one ton to their destination.

The STRs independently calculate the best route and move freely around the space using the SLAM (Simultaneous Localization and Mapping) navigation method.

The SLAM algorithm does not require permanent navigation transmitters to be installed in buildings and can therefore be set up quickly in a new environment without requiring any structural adjustments.

An integrated battery module from the BMW i3 is able to supply the STR with power for at least an entire shift.

The next generation of the STR will be rolled out at the end of 2020. Currently, more than 130 STRs are already in series production at several different BMW Group production sites.

Pilot projects in the non-automotive sector

Markus Bauer, COO IDEALworks, says: “With the Smart Transport Robot, we have launched a highly competitive product. From October onwards, we have been carrying out pilot projects at companies from a wide range of industries. These trials show just how robust and versatile the STR is.

“The success of the pilot project and the resulting demand for the STR were decisive in founding IDEALworks. We want to develop IDEALworks into a top player among the providers of industrial logistics robots in the long term.”

The new company IDEALworks is located in Munich. In its initial phase, the team consists of around 30 experts from a wide range of fields and nationalities.