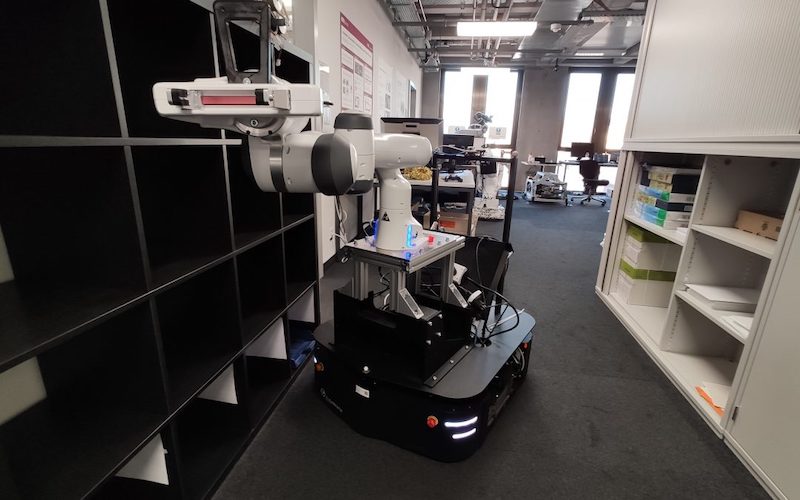 A team from the Autonomous Systems Lab at the public research university ETH Zurich in Switzerland is creating robots and intelligent systems that are able to learn on the job. (See video below.)

The team’s machine – which consists of a robotic arm mounted on a mobile platform – can “autonomously operate in complex and diverse environments”, says an article on Clearpath Robotics’ website.

Using a Clearpath Ridgeback as a base and equipped with a Franka Emika Panda manipulator arm (called RoyalPanda, that is Ridgeback + Panda), the team is experimenting with a series of different scenarios to develop best practices of how a robot could “learn”.

The team is concentrating on mechatronic design and control of systems that will autonomously adapt to different situations and cope with uncertain and dynamic daily environments.

Researchers are most interested in developing robot concepts from real-world testing whether that be on land, air, or water. In their pursuit of adding intelligence to autonomous navigation, they work on novel methods and tools such as for perception, abstraction, mapping, and path planning.

The research team is headed by a group of experienced researchers, engineers, and professors. The goal of the project is to explore the possibilities and limitations of using Reinforcement Learning to train a neural network in simulation which controls all degrees of freedom of a mobile manipulator (that is joints of the manipulator and movement of the base platform) and deploying it on a real robot.

In this aim, they began with a robot that was constrained to move in one plane and directly fed data from two 2D LiDAR scans to the network to give the controlling agent an understanding of its environment.