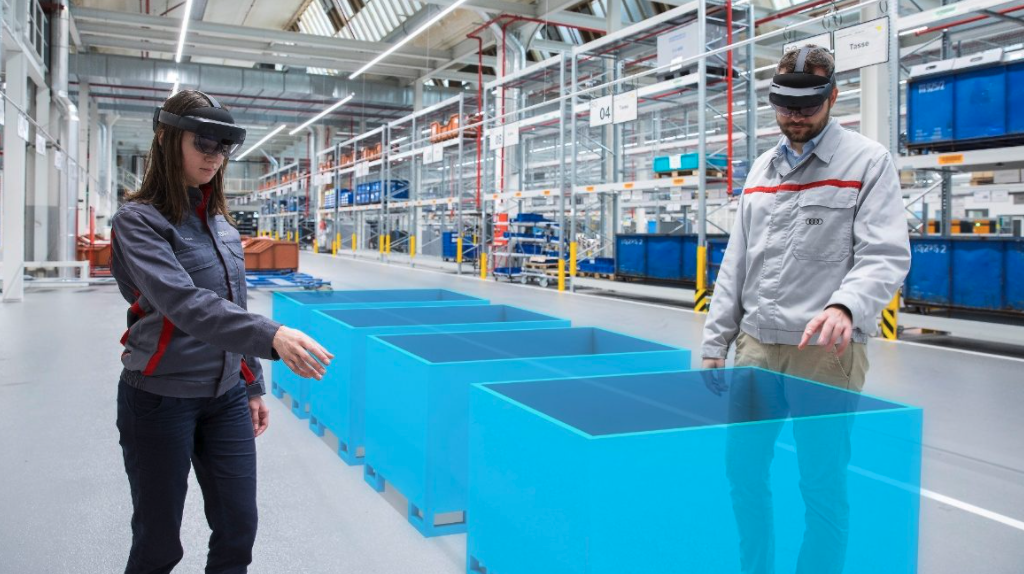 Audi is turning to augmented reality to plan complex logistics processes: Virtual presentation of three dimensional holograms that are shown in their actual environment helps planners to better evaluate the future situation.

Because of this, prototypes of containers or equipment, and so on, which are elaborate to produce, are no longer necessary. Audi uses the new generation of Microsoft’s “HoloLens 2” device for this.

The software makes use of existing CAD data for various objects, such as shelves, containers, and parts.

LayAR visualizes this “digital twin” as a three‑dimensional hologram in the AR device and projects it in life size in the actual environment.

Peter Kössler, board of management member for production and logistics, says: “We use digital technologies systematically in Audi Production where they provide us with true Vorsprung.”

This year, the AR devices have become a permanent part of the logistics planners’ toolbox.

Through this, their work is made more efficient and can begin significantly earlier: For example, experts in the Ingolstadt body shop are currently planning machine technology for using an innovative driverless transport system, long before the first automated guided vehicles will be delivered.

LayAR will soon also be used for setting up the production of electric vehicles in the main plant.

Project manager Tobias Brigl, says: “In order to visualize structures and relative sizes up to now, we have been using in‑house prototypes of containers, shelves, and lines elaborately affixed to the floor.

“This calls for a great deal of imagination. Augmented reality is an ideal tool to close the gap between the real and the virtual worlds.” It helps to recognize problems early on and to develop solutions quickly.

The same images are shown on multiple AR devices at the same time through synchronization. If a user reaches for an object, they can move it, turn it, or replace it with simple movements of their hands. Everyone involved can see changes in real time.

The shared image simplifies discussion and thus facilitates working together – even beyond the boundaries of sites and national borders.

In the future, specialists from other plants or who are working from home can be included in decision‑making by web conferences.

A Supply Chain Planning project team tested the new software together with development partner Viscopic for a number of months.

It is being used during planning workshops in the production hall, during presentations, and in layout discussions in the office. LayAR makes it possible for planners to virtually miniaturize the entire setup of the hall to the point where it can be projected onto a desk.

A virtual tool facilitates precise measurement of distances and areas directly in the holographic image. All changes and results, for example from a workshop, can then be transferred into the CAD data in as little as a couple of seconds.

This means that all participating employees can immediately continue to work using the new planning status.

The premium carmaker is also using mixed reality in other areas: Audi Product Communications has already been using “virtual exhibits” for several years to visualize technical processes and complex technologies for journalists.

The holographic animations are based on CAD design data and are presented in 3D using HoloLens data devices during press events. Second‑generation devices are being used in this case as well.