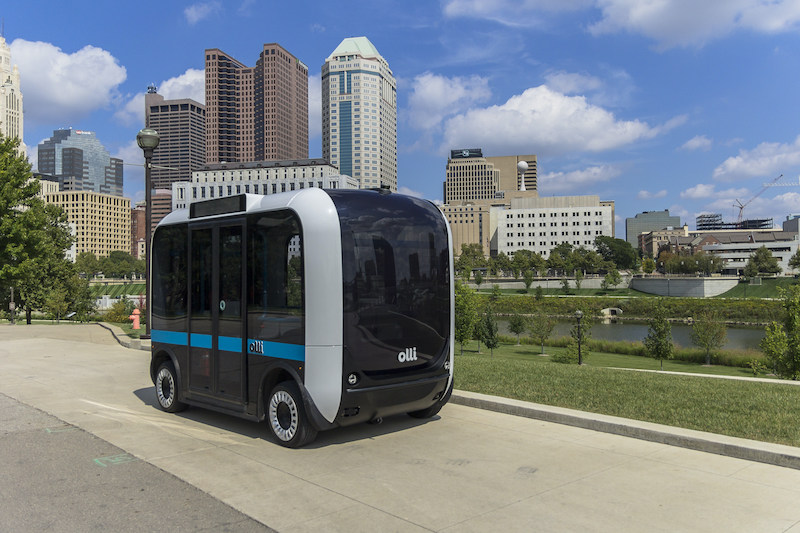 The autonomous shuttle market is forecast to be worth $18 billion by IDTechEx, which includes driverless minibuses and small, sidewalk delivery robots in the category.

An increasing number of commercial vehicles are going battery-electric, assisted by battery life of one million miles and ranges of up to 600 miles being imminent. Shenzhen alone has 70,000 electric logistics vehicles.

Next come robot buses, robotrucks and robotaxis with driver elimination reducing cost by intensive use. IDTechEx has a report on the topic, Electric, Hybrid & Fuel Cell Light Commercial Vehicles 2021-2041.

Radically different robot shuttles will do these tasks and much more, as detailed in the IDTechEx report, Robot Shuttles and Autonomous Buses 2020-2040.

Specifically for cities, they replace ten or more types of vehicle and they will be allowed to go where none of these are allowed, such as down paths, across plazas, into shopping malls, symmetrical so no U-turns, with some even moving sideways when needed.

Expect multiple paybacks such as windows on all sides carrying moving color advertising paying the cost of the school bus mode twice a day.

Toyota Woven City plans robot shuttles as the only vehicles allowed centrally, so no congestion or accidents. Its e-Palette robot shuttles reconfigure from fast food to utility vehicles, taxis, buses, hire cars, parcel post and mobile libraries. The poor and disabled are empowered. No sidewalks needed.

However, all robot vehicles need to wait to 2030 or so to go big time with trusted, safe, insurable, legal, affordable Level 5 autonomy with no driver capability.

Then exponential growth to $18 billion in 2040 awaits. Let us look at the latest situation with robot shuttles followed by an appraisal of new robot versions of what we have already.

There are 36 projects in 15 countries with trials in 20 countries. Ignore those using golf cars or small buses. They are unable to test even the shuttle essentials such as no U-turns, travel and impact strength in two directions, smallest footprint per passenger, rapid reconfiguration.

They are backed by giants like Toyota and Baidu to startups, one having raised $1 billion. Trials mainly explore new people applications, often free-of-charge, from empowering the poor and disabled, inner circulators or viably filling in gaps in the transportation network and replacing very underutilized vehicles such as school buses and private cars.

Olli 2.0 has 160 km range, speed of up to 40 km/h. Its Protean in-wheel motors improve safety, performance and space. Perhaps it will fit Protean 360 degree motor-wheels next – like castors on a trolley. See the IDTechEx report, Electric Motors for Electric Vehicles: Land, Water, Air 2020-2030.

Einride and Streat are subsets

This autonomous, pre-fab food-truck would be customized based on the restaurant running within it and rented out at low cost, he suggests.

Air pollution is now the world’s fourth killer, according to the State of Global Air Report late 2020 – 4.5 million deaths from outdoor air pollution in 2019. Over 90 percent of the global population lives in areas where fine particulate matter levels do not meet the World Health Organization guidelines.

Since even “zero-emission” vehicles emit these particles from their tires, the message is now fewer, not just cleaner vehicles. Multipurposing robot shuttles come to the rescue.