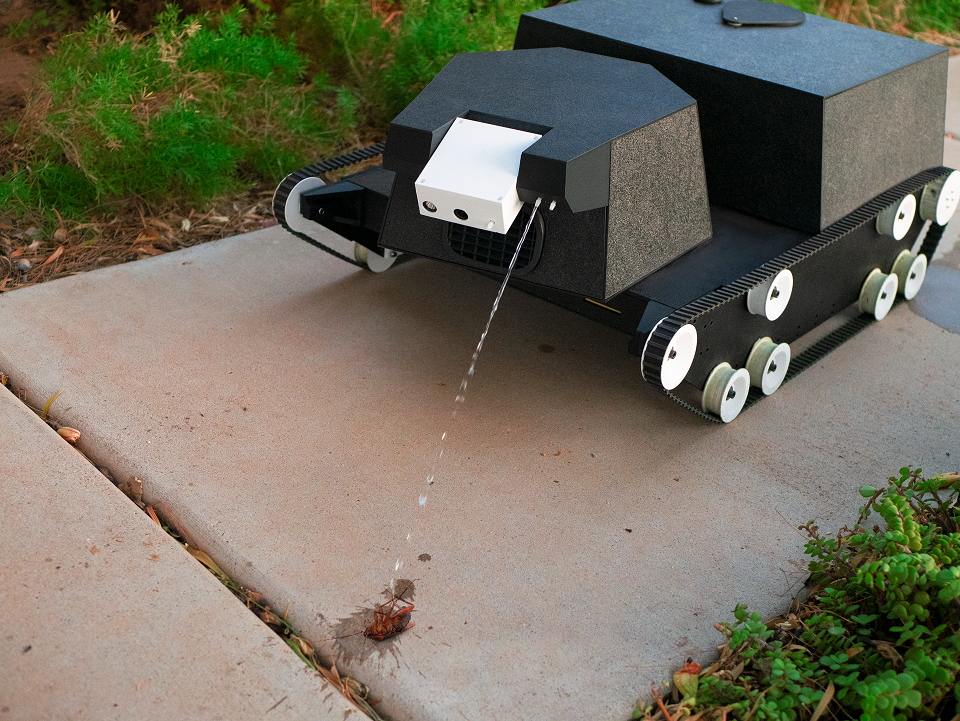 Whirly Max is introducing its intelligent landscaping robot Yardroid, which is described as looking like a “mini tank”. It runs on tracks, is able to turn on the spot, can climb over vertical obstacles up to 6 inches high and slopes of up to 45 degrees.

The company says that Yardroid is a big step up from the perimeter guided robotic lawn mowers available today. Yardroid is controlled by computer vision and artificial intelligence.

It can find its way around an area by special proprietary computer algorithms. Instead of randomly criss-crossing a lawn, Yardroid drives in a defined pattern. It can automatically change the mowing height.

Yardroid has a host of other functionalities. Its stabilized main water gun is mounted in Yardroid’s turret. It can spray water at nearly every angle, and up to 30 feet out. It can be used for irrigation as well as for chasing away pests, such as starlings.

The water gun is fed by a 2 gallon water tank which Yardroid is able to autonomously refuel via the automatic companion spigot water valve. Yardroid is hence able to spray hundreds of gallons of water per day.

Yardroid has two smaller fluid guns that eject small amounts of pest and weed killer to control insects, arachnids and all kinds of weeds, with minimal use of chemicals.

The leaf blower is integrated into the turret. Coupled with computer vision and artificial intelligence this enables Yardroid to blow away debris to keep outdoor surfaces clean.

The same features that enable Yardroid to do landscaping, make it ideal as a robotic security guard as well. Yardroid uses its camera and LED gun light to monitor its environment at all times, including looking out for intruders, recording them, warning them, and even distract, delay and potentially chase them away by spraying them with water.

Yardroid protects itself against theft in a similar manner, including sending you its current GPS location. For extra safety against theft Yardroid can be secured via password.

Yardroid has been under development since 2018 and is scheduled to enter the market in 2021 at a price of around $2,500.