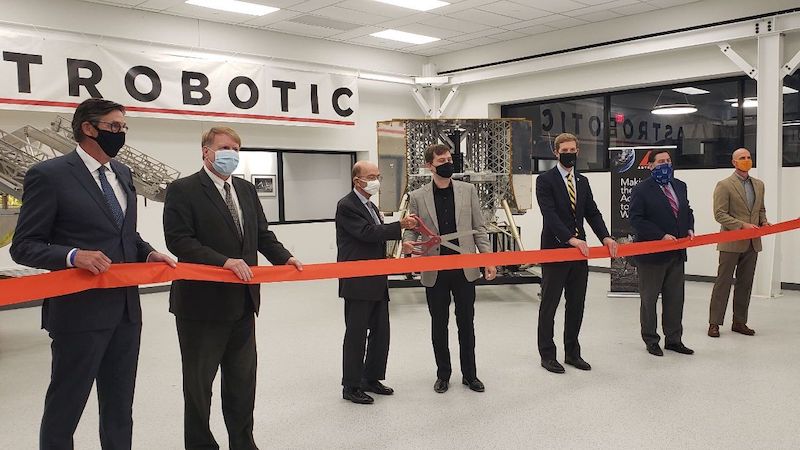 Space robotics startup Astrobotic has officially opened its new headquarters in Pittsburgh in a ribbon-cutting ceremony.

The 47,000 square foot complex is the largest private facility in the world dedicated to lunar logistics. Astrobotic’s Peregrine and Griffin lunar landers will be built on-site, with Peregrine set to become the first commercial mission to the Moon, and the first American lander on the Moon since the Apollo missions.

John Thornton, CEO of Astrobotic, says: “I like to say we’re a 13-year overnight success story.

“In the past 18 months, we grew from a staff of 18 to more than 100 employees, with two funded lander missions and a rover mission to the Moon, and multiple contracts to develop exciting new space technologies. It’s still surreal.”

Monday’s ribbon-cutting ceremony was attended by a wide range of prominent federal, state, and local officials, including: 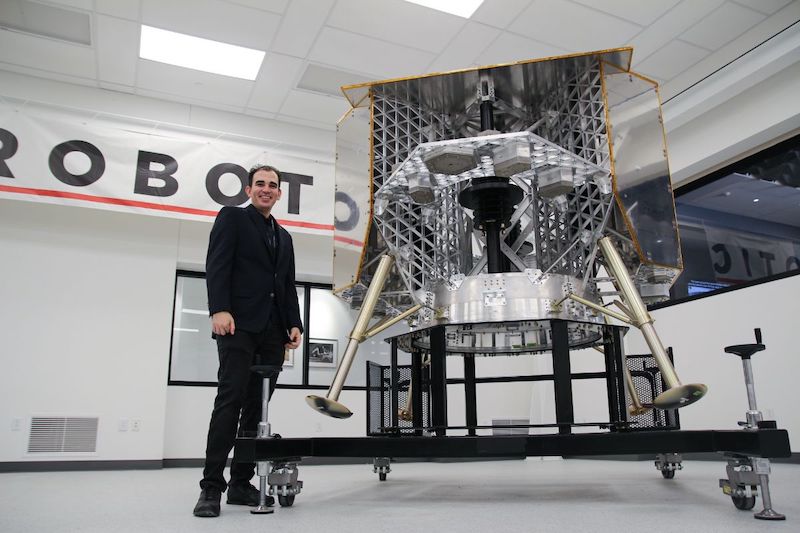 Wilbur Ross, US Secretary of Commerce, says: “You [Astrobotic] are currently leading the market with seventeen contracts in place for your first mission with customers in seven countries.

“The Commerce Department will continue to make resources available to you and to the broader US commercial space industry to ensure that we remain the leader in space commerce.”

US Congressman Conor Lamb says: “I personally want to thank all the folks at Astrobotic for taking on this national mission. You are a big part of our strategy going forward to be a successful, strong, growing economy in a country that is well-defended and well-represented in space. So thank you very much, we’re proud of you.”

Astrobotic will use the facility to build its lines of landers, rovers, autonomous spacecraft navigation systems, and other space technologies. The facility will also be used to operate them.

When Peregrine lands on the Moon next year, it will be controlled directly from the Astrobotic Mission Control Center inside the Pittsburgh headquarters.

The opening of the headquarters marks a major milestone in the company’s history. After its inception as a private company spinoff from Carnegie Mellon University’s Robotics Institute, Astrobotic started in a 400 square foot room above a bagel shop in Pittsburgh’s Oakland neighborhood.

It later moved to a former steel-stamping factory in the Strip District, and then an office building downtown. The company has grown rapidly, signing 15 commercial customers representing seven countries for its lunar payload delivery service, and winning a $79.5 million NASA contract to fly scientific instruments aboard Peregrine, and again in June by winning a $199.5 million contract to deliver NASA’s water-hunting rover, Viper, to the south pole of the Moon. 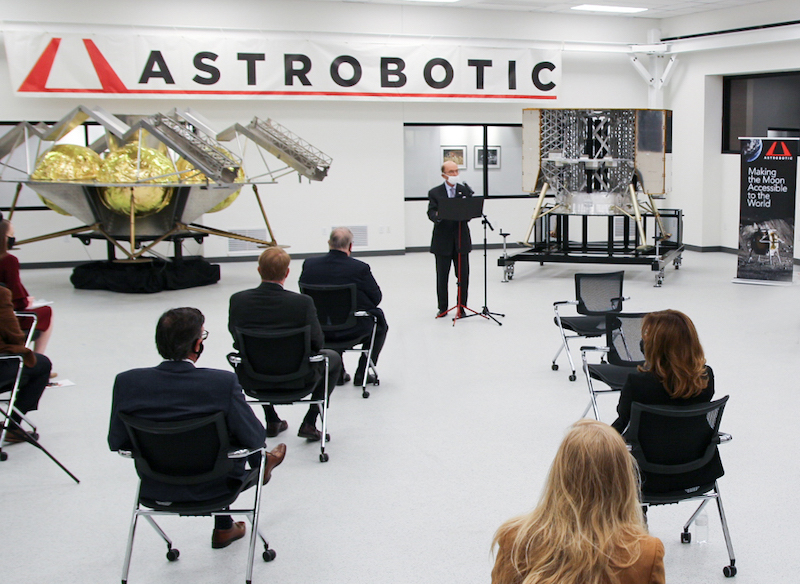 Ryan Stephan, payload integration manager, NASA Commercial Lunar Payload Services, says: “The first Astrobotic mission, which will fly on Peregrine, will deliver about a dozen NASA-developed payloads to a mid-latitude region on the Moon.

“These NASA-developed payloads will range in capabilities from technologies to demonstrations, demonstrate functionality in the unique environment of the Moon. We’ll also fly science instruments, so we’ll obtain important scientific data to help inform our future exploration missions.”

Astrobotic’s new headquarters is located in Pittsburgh’s Northside, home to five historical districts. The headquarters is within a mile of several popular cultural destinations, including The Carnegie Science Center, Heinz Field, Stage AE the National Aviary, and the Children’s Museum.

Eric Bitar, Governor’s Action Team SW Director, says: “The innovation sector in Pennsylvania, and especially here in Pittsburgh, has been a powerhouse for the Commonwealth.

“And that’s thanks to companies like Astrobotic who have operated and grown here in Pittsburgh since their founding 13 years ago.

“Astrobotic is at the forefront of developing advanced robotics for lunar operations that will help propel the industry into the future and further cement Pittsburgh’s status as an international hub.”

Rich Fitzgerald, Allegheny County executive, says: “It’s really a story about what Pittsburgh has always been. We’ve always been a place of innovation. Always a place of the next technology.”

Bill Peduto, Mayor of the City of Pittsburgh, says: “I was five years old when we landed on the Moon. By the time I was six years old, I could name every planet. And that is an opportunity that is now down the street for every young Pittsburgh child.

“This is the technology of the engineers, and the dreamers, and the scientists from our region. And this is the product that you (Astrobotic) have given us to give to the world.”

Mark Anthony Thomas, president of the Pittsburgh Regional Alliance, the region’s economic development organization, says: “Technology and robotics give Pittsburgh a competitive edge, and companies like Astrobotic – a venture that’s successfully commercialized its advanced space robotics capabilities and is a rising star – are catalyzing interest in Pittsburgh, creating job growth and carrying the banner for this region’s unrelenting drive to innovate, shape the world and own the future.

“As one of the largest private facilities of its kind anywhere, Astrobotic’s new headquarters and lunar operations facility is proof that remarkable things are happening in Pittsburgh.”

At the opening ceremony, and as Astrobotic employees return to work at the new facility, the company has required masks and limited building capacity to allow for greater social distancing due to the Covid-19 pandemic. Astrobotic has also enlisted Checklist Facility Maintenance cleaning services to maintain high sanitary standards.