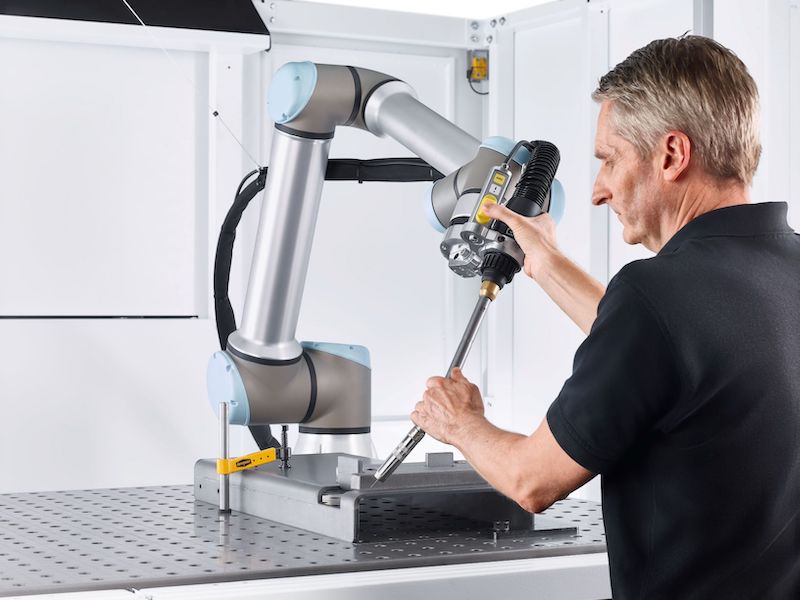 Industrial machine tools company Trumpf has released its first automated arc welding system. The TruArc Weld 1000 comes with a collaborative robot, also known as a “cobot”. After the operator has manually guided it over a component, the cobot then automatically carries out the weld.

It is significantly more efficient than would be possible manually. With the new system, Trumpf says it is responding to the increasing lack of skilled workers and helps fabricators get started with automated welding. CE-compliant and approved by TÜV Austria, the TruArc Weld 1000 “meets the very highest safety standards”.

Programming made fast and easy

Unlike conventional industrial robots, operators can interact with the cobot, guiding it over the part by hand. A built-in sensor ensures it responds smoothly.

Trumpf has equipped the cobot with an operating unit. This lets users store the weld path’s start and end points as well as intermediate waypoints in order to create the program. 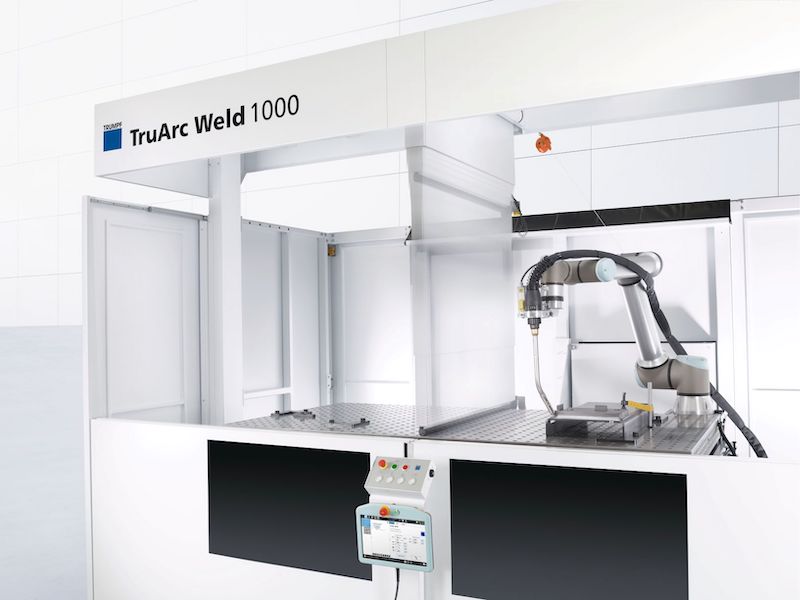 Furthermore, the cobot control system includes templates for welding programs and parameters that cover scenarios such as different sheet thicknesses.

Combined with the operating unit on the welding torch, this greatly simplifies the task of programming the robot. This enables users to program and weld with the TruArc Weld 1000 within minutes. Next to no previous experience is needed handling the system, says Trumpf.

The TruArc Weld 1000 offers an automated alternative for many parts that users would normally weld by hand. Thanks to the rapid programming, fabricators have an affordable means of tackling short production runs and one-off pieces, even if the parts only require a short weld seam.

Inside the TruArc Weld 1000 is a partition that can be raised and lowered. This allows users to divide up the working area and choose between welding one large part (single-station operation) or several smaller ones (two-station operation).

In single-station operation, the robot can weld parts measuring up to 2000 x 600 x 600 millimeters.

Other ratios of width to length are also possible depending on part dimensions. In two-station operation, the TruArc Weld 1000 can process smaller parts measuring up to 600 x 600 x 600 millimeters.

To ensure it can easily reach both stations, the robot travels between two positions along a linear axis. While it is busy welding on one side, the operator can use the time to set up a part on the other side. The robot program can be transferred automatically from one station to the other.

Ready to go with no training required

Customers can carry out commissioning of the CE-compliant TruArc Weld 1000 themselves within a few hours using the dedicated video tutorials. From the wire coil to the welding parameters, the system comes with everything needed to get started with the welding process.

No classroom training is required for machine operators, says Trump. “The video tutorials contain all the information required to quickly learn how to operate and program the machine.”