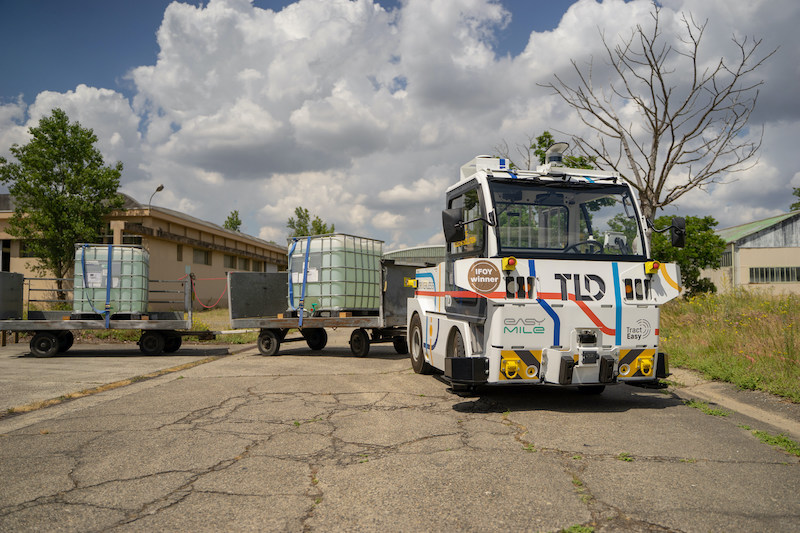 Autonomous shuttle manufacturer EasyMile has launched what it claims is the first autonomous tow tractor dedicated to material handling within a private site.

TractEasy is designed for use at a factory or a logistics center, and is able to operate both inside and outside in a complex urban-like environment.

EasyMile says it is building on its “successful experience in autonomous public transport”, and the applications for autonomous technology for industrial logistics are “numerous”.

The automation of logistics flows is not new but what autonomous technology offers is. Benefits of operations using AGVs can now be applied to a greater number of logistics processes.

Automated guided vehicles, or AGVs, have been in factories for decades, but they may have fallen behind in the autonomous revolution.

Autonomous technology already used for public transport is taking over. With its ability to cross over to material handling operations, private industrial sites are the clear catalysts.

EasyMile’s prediction is the application of this technology to vehicles dedicated to logistics flows will concretely move plants into Industry 4.0.

The company has released its own list of five reasons why autonomous technology is a “game changer” for Industry 4.0, which refers to connected machines and devices on industrial networks.

EasyMile’s five reasons are listed below.

Like cities, industrial sites are complex environments. A vehicle that has the ability to obey traffic lights, negotiate other vehicles, recognize pedestrians or enter a roundabout is one that can move goods from one place to another unaided.

The sensors used for automation (lidars), combined with powerful data fusion algorithms make it possible to get away from dedicated infrastructure.

An autonomous vehicle can navigate relying on what is already there. It is no longer necessary to install and maintain magnetic strips on the ground or reflectors on walls or posts as is the case with traditionals AGVs.

This makes it much easier and quicker to adapt operations.

Reason 3: Optimization of costs and productivity

Whereas manually operated flows are subject to occurrences that can lead to goods losses, infrastructure damage, and sometimes even personal injury, driverless flows run on a complex safety chain with a much lower incident probability.

Not all intra-site logistics operations can be secured on a loop between two loading/unloading points.

This is why most manufacturers have invested heavily in the development of advanced fleet management systems, sometimes dedicated to their autonomous vehicle fleets.