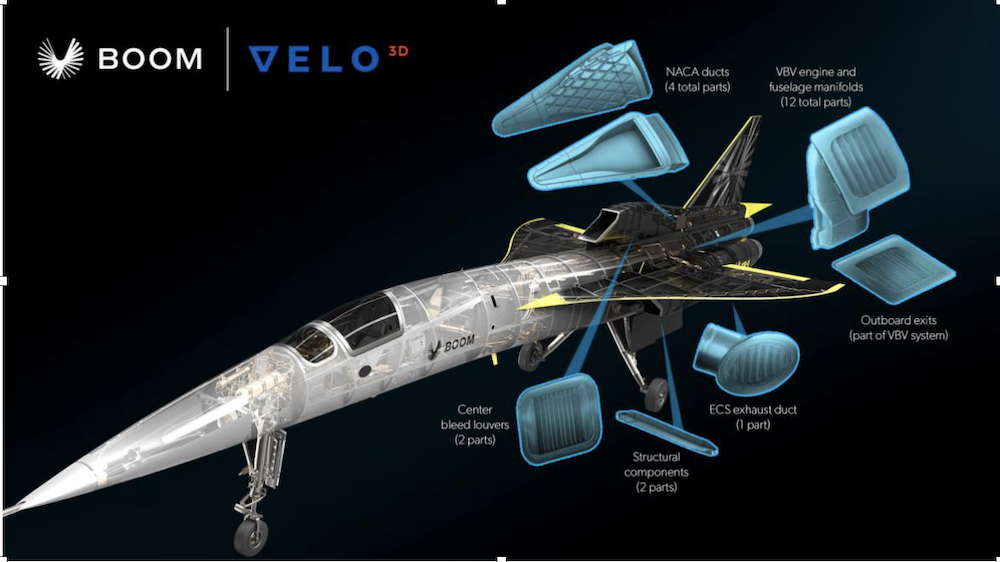 VELO3D, a digital manufacturing company, has announced that Boom Supersonic’s XB-1 aircraft includes 21 flight hardware components that were manufactured by VELO3D’s Sapphire 3D metal printer. Unveiled at Boom’s hangar in Centennial, Colorado, the company believes that XB-1 marks a turning point in commercial viability for supersonic travel and demonstrates the power of additive manufacturing (AM), or 3D printing, to enable innovation while accelerating product development.

“Aviation hardware is especially difficult to manufacture with 3D metal printing, due to challenging aerodynamic designs that must be balanced with superior durability and high temperature requirements,” said Benny Buller, CEO and Founder of VELO3D. “VELO3D’s technology allows the production of lightweight, complex designs for mission-critical applications in the toughest operating conditions. Our partnership with Boom is an advancement for the metal AM industry, and XB-1 supersonic aircraft is a game-changer for the aviation industry.”

Boom Supersonic and VELO3D announced a partnership in 2019 to manufacture complex flight hardware to build XB-1, and ran a series of qualification trials on VELO3D’s Sapphire system. The printed Titanium parts are used for engine hardware, the environmental control system, and structural components. Characteristics of the geometric designs include tall, thin walls with high aspect ratios, which are inherently difficult to manufacture with either traditional processes such as welding and casting, or even most existing 3D printing technologies. VELO3D’s SupportFree printing process enables design freedom and quality control, eliminating manufacturing constraints to innovation in aircraft design.

“We strongly believe that supersonic is the future of flight and we’re appreciative of VELO3D in helping us to realize this goal with XB-1,” states Mike Jagemann, Head of XB-1 Production at Boom Supersonic.

XB-1 is the world’s first independently developed supersonic jet. It will be used to demonstrate critical technologies for Overture, Boom’s future commercial airliner, such as advanced carbon-fiber composite construction, computer-optimized high-efficiency aerodynamics, and an efficient supersonic propulsion system. XB-1 is the end-product of years of development effort, including multiple wind tunnel trials, dozens of structural tests, hundreds of simulation iterations, and tens of thousands of work hours.