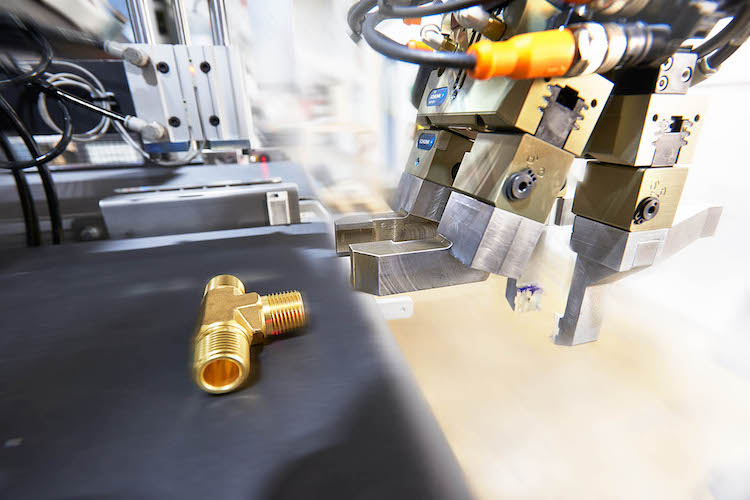 Robotic machine tending systems have been on the market for a number of years and they’ve faithfully helped many firms increase their throughput without burning through valuable operators in the process.

Though some shops are coming to grips with the notion that most of these machine tending systems are great at loading and unloading machines, but that’s all they do.

Sometimes jobs require off-machine work in between machine operations or the need to reposition parts in the same machine to complete the work.

Previously, the options were to run part of the job on the machine, enlist an operator to perform a manual function before sending the parts through a second time, or just skip the robot and go back to an operator-only process for the entire run. 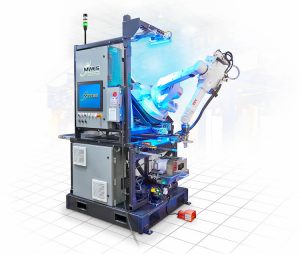 “We use these technologies all the time in our custom automation builds,” mentions Pete Gratschmayr, VP Sales & Marketing, MWES, “It may seem like simple additions to the usual machine tending cell, but over time, those additions amass big savings both in operator time and production speeds.”

Midwest’s machine tending system is designed from the start to automatically provide those secondary operations in the process.

The robot can remove a part from the machine, deburr certain areas, blow off material, or inspect the part before placing it back in the machine to complete the process.

The MWES system can also reposition the part in the machine during the process to reach areas of the part hidden in the first mounting position.

In the MWES system, robotic vision is used instead of specialized, custom part racking or trays. The vision system identifies parts delivered via belt. Unlike normal part trays, precise placement of the parts isn’t necessary. The machines only need a specific side visible.

The software takes it from there to identify, pick and place the part exactly into the machine. This makes specialized racks and trays, as well as the time operators spend filling and monitoring of them unnecessary.

“Lights out manufacturing will never really get here unless we start solving the next step in machine tending and that’s finding ways to deal with jobs that aren’t simple,” says Scott Woida, President Midwest Engineered Systems, “I think we’ve made a good step forward with these systems.”

All of this automation capability is designed to be up and running as quickly as possible. The complete system is built into an integrated unit that takes up a little more space than a standard pallet.

This smaller footprint allows for easy forklift placement and a small amount of floor space.

With all of its systems firmly positioned within its rugged frame, the system only needs power, air and Ethernet connections to finish the install.

All of these elements vastly reduce the amount of time to get a system set up and operational. MWES knows that in production settings, it’s not just square footage that’s valuable but even more so, uptime.