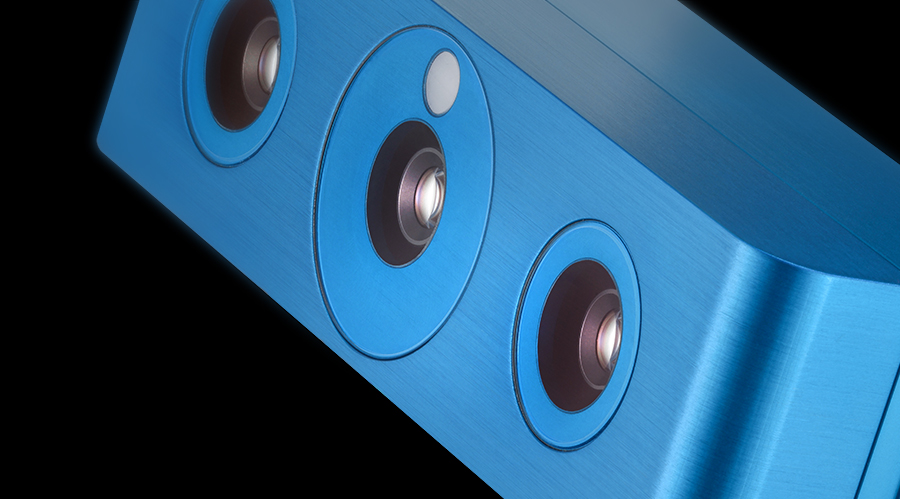 Each Ensenso camera system contains two 2D IDS cameras to view the scene from different positions, similar to the way human eyes work, with artificial intelligence processing the data, rather like the human brain does.

“Special matching algorithms compare the two images, search for corresponding points and visualize all point displacements in a disparity map,” explains IDS. “This is then used to calculate depth information for the resulting point cloud.”

The idea of using two co-ordinated cameras in one industrial vision system in this way may seem obvious to some, but then good ideas usually do seem obvious after they are demonstrated.

To date, the vast majority of industrial vision systems use one camera in a single unit. This can be connected with other single cameras, providing information depth, position and so on, but it’s only recently that the two-camera, human-like vision system has been introduced into the industrial sector.

Advances in AI and cloud computing, as well as the availability and lower price point of camera and other sensors have enabled the building of such sophisticated vision systems in recent times.

And, according to senseIT, which partnered in the development of a robotic work cell named val-IT FLex based on the Ensenso technology, these dual-camera systems are already proving to be more effective than human vision.

Anouar Manders, software engineer at senseIT, says: “Thanks to Ensenso’s 3D technology, we are able to detect deviations within a tenth of a millimetre. This is better than the human eye can do.”

In a typical automatic or robotic 3D inspection cell, the camera system is the most important component.

Manufacturers use such systems for inline inspection, which means inspecting things in the middle of the production process rather than when the finished item is ready to be shipped.

This means that inline inspection systems need to be fast and accurate so they don’t delay the production process and can spot flaws that need to be addressed.

Ensenso says its stereo 3D cameras can take a close look at “extremely complex components with the utmost precision”, and in less than 30 seconds.

The system checks and validates the completeness of assembled products up to the size of a shoebox and is exceptionally precise in detecting faults: the software signals deviations in the tenth of a millimetre range.

This applies to all types of defects that can occur during production or transport: broken or missing parts, deformations, machining material, cavities or excessive burrs.

Manders says: “During the development of the 3D inspection cell val-IT Flex, we optimally implemented the advantages of 3D metrology. We implemented three Enseno stereo 3D cameras for this purpose.

“Thanks to Ensenso’s 3D technology, we are able to detect deviations within a tenth of a millimetre. This is better than the human eye can do.”

The val-IT Flex cell consists of a turntable and three Ensenso N35 3D cameras. The component to be inspected is placed on the rotary table with a diameter of 440 mm and a height of 240 mm and recorded from all sides.

During a pre-programmed, complete 360 degree rotation, the cameras generate a high-resolution point cloud of the component.

The object is captured with different integration times in order to do justice to the variance of the component properties.