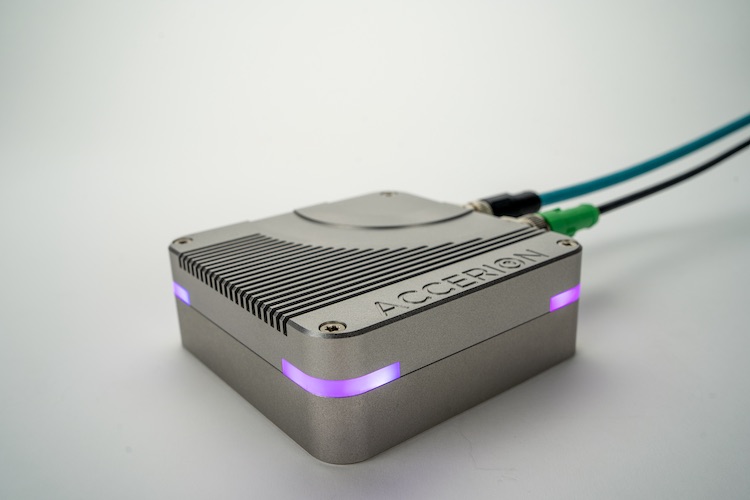 The company says the sensor, called Triton, “sets the new standard” in mobile robot and AGV positioning for manufacturers and logistics operators who demand the highest degree of flexibility, adaptability, speed and precision.

After months of field testing in pilot programs across the globe, Triton is robust, proven and ready for high-performance logistics operations, supporting use cases such as free navigation, high-precision docking and virtual line following.

Warehouse fulfillment is Triton’s first market, one of the fastest-growing sectors globally. Accerion responded to market demands, with engineers taking up the challenge to design Triton from the ground up based on client specifications.

That meant packing the technology from flagship product Jupiter into a compact localization sensor for smaller AMRs.

Willem-Jan Lamers, Accerion founder and managing director, says: “While developing Triton, we listened closely to the market and customers.

“Optimizing size, performance, cost, reliability, features and Triton’s certification set (CE, FCC, RoHS) was a technical challenge, but our engineering team is one of the most competent in our industry, and now Triton is ready to go global.”

For the autonomous mobile robot sector, easily and accurately determining the robot’s location – independent from the environment – is essential, specifically in warehouse logistics and production automation.

Consisting of an optical sensor, an integrated processing unit and Accerion’s highly advanced algorithms, Triton scans the floor surface beneath robots and uses it as a reference.

Triton uses the floor surface as a map to provide coordinates to the navigation system so robots can localize themselves in the environment.

Accerion says the system requires “no lasers, no magnetic tape, and no induction lines”.

Ruben Vandenheede, Accerion system engineer, says: “We pushed hard to get maximum performance out of the hardware.

“We used a superior camera, expanding the optics’ capabilities. Reliability improved dramatically after we put Triton through the ringer to make sure it’s beyond robust for industrial activities.”

After a successful pilot program, Triton is available now, and Accerion is shipping to clients across the globe.