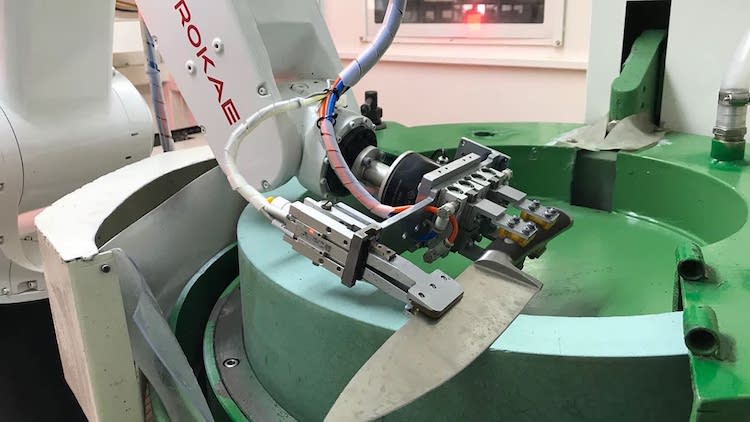 Rokae has unveiled a robotic system for making knives, scissor blades and other metallic objects with sharp edges.

The company has partnered with Zhang Xiao Quan, a 400-year-old manufacturer of cutting tools, to implement a robotic system in place of what would be a very time-consuming process for a human worker.

In a typical knife manufacturing facility, huge rolls of steel arrive and are cut into blanks, which are then shaped using presses, and then sharpened.

The sharpening process usually involves a worker – a skilled craftsperson – sitting at a spinning stone and putting the blank against it, carefully and precisely creating a sharpened edge.

Rokae says it has two robotic systems for making knives and scissor blades, and they can undertake tasks such as grinding, polishing, deburring and sharpening.

The company says its robotic system has result in efficiency gains of more than 50 percent and productivity increases of almost 100 percent in some parts of the process.

Rokae has developed a software system called AutoGen which can guide the robot in the middle of the operation to adjust things like pressure and angle to get the best result.

The AutoGen system can also monitor vibration and adjust the robot accordingly.

Beijing-headquartered Rokae, also known as Luo Shi, is one of the new generation of robotics companies to have emerged during the past few years of government-backed technological innovation in the industrial sector.