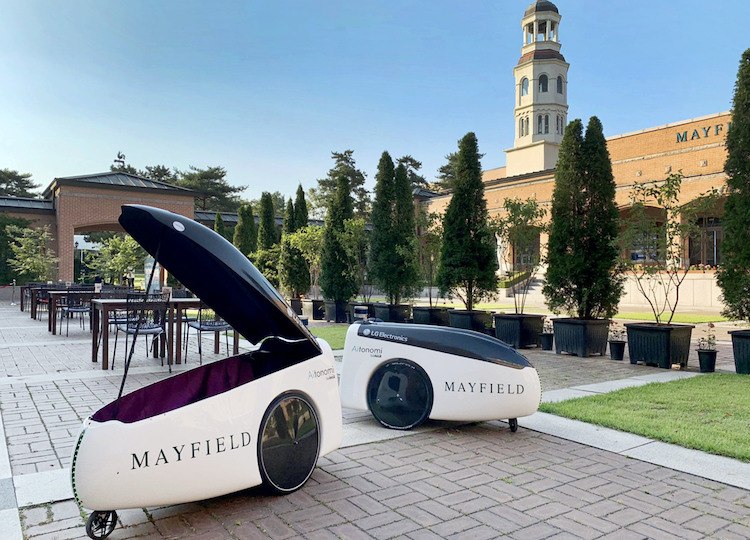 LG Electronics is providing the services of its delivery robot to an upmarket hotel in South Korea, according to The Korea Herald.

The small, mobile robot is being employed at the Mayfield Hotel, in the capital city Seoul, and will deliver food from an indoor kitchen to diners seated outside on the terrace. It will also be used to carry dishes back to the kitchen.

There are two robots currently in operation at the Mayfield, and they look very similar to the ones unveiled by TeleRetail a couple of years ago., although we cannot confirm at this stage whether it is the same.

TeleRetail has an existing partnership with ThyssenKrupp, which used the robot to deliver items to engineers working in various buildings on its elevators and other systems.

Currently, TeleRetail appears to be promoting itself more as a software company and may be licensing its hardware to outside companies like LG.

LG is planning to use the partnership with the Mayfield to learn more about the operation of robots at hotels before it expands more into the sector.

According to The Korea Herald, LG is currently working with the Mayfield Hotel on a mobile robot that can pour drinks and take them to customers.

LG says in a press release: “The hotel and LG are working together to replace simple and routine tasks with robots, while having human employees focus on responding to other urgent needs of customers.”

LG’s plan is to eventually offer a multi-tasking robot that can be integrated to any hotel’s operation, depending on its suitability.

Further, LG is looking to develop the robot’s suitability for operation on university campuses, amusement parks, and apartment complexes.