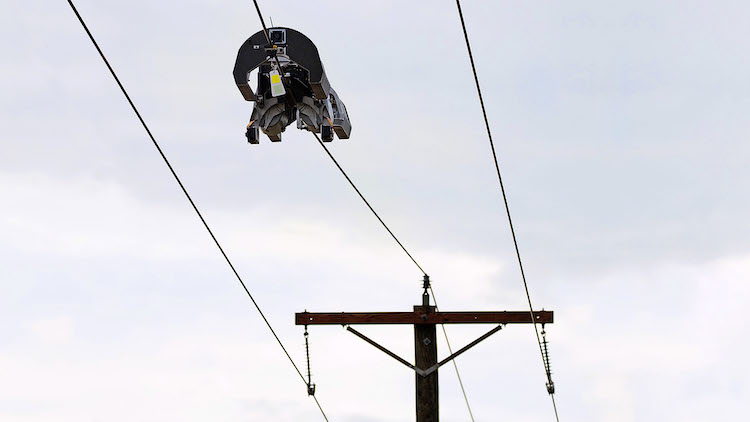 Social media giant Facebook has unveiled a robot, designed by ULC Robotics, that can move along high wires to install telecom and power lines. (See video below.)

Facebook Connectivity, in collaboration with a number of partners, says it has spent the last few years developing the robot.

The company describes it as an aerial fiber deployment solution that uses a robot designed to install a specialized fiber-optic cable on medium-voltage power lines.

“This system combines innovations in the fields of robotics and fiber-optic cable design to dramatically lower the cost of deploying fiber by utilizing electrical infrastructure,” says the company on its blog.

Facebook says it does not have a financial stake in NetEquity Networks and will not own or operate fiber networks created by them.

Facebook says it wants to connect the estimated 3.5 billion people around the world who are not yet connected to the internet, perhaps because they live in remote areas.

Extending fiber or any kind of internet connection to such areas would be prohibitively expensive if it involved human labour, but with Facebook’s robot, perhaps more of these unconnected areas will eventually have internet access.

Meanwhile, the 3 billion-plus people who do have access to the internet are close enough to networks that have intermittently updated from 2G and 3G to 4G and LTE for wireless telecommunications, with wireline access networks have moved from DSL and coaxial to fiber to the home.

But there, too, there is a need to increase capacity by adding more fiber to the network because the average data usage per person is growing 20 to 30 percent annually.

“Today, fiber is a critical element to bringing more people online at faster speeds because it has a bandwidth thousands of times greater than that of any other technology,” says Karthik Yogeeswaran, wireless systems engineer at Facebook, and write of the blog.

“However, the cost and complexity of deploying fiber networks has inhibited large-scale deployment.”

Most national governments around the world have introduced plans to connect rural and remote areas to the internet, but it’s not always top priority.

Facebook says the the cost of installing fiber comes “almost entirely” from fiber construction, and it concentrated on this area.

The company says it believes its robotic system “will allow fiber to effectively and sustainably be deployed within a few hundred meters of much of the world’s population”.

Yogeeswaran says: “We expect to see technology trials of this fiber deployment system next year.”

The fiber that Facebook has developed significantly lighter than current fiber cables in the market. (See picture below.)

To find a suitable solution, Facebook talked to a number of robotics companies across the globe.

“In the end, we selected ULC Robotics, based on their innovative concept design and their decade-plus of experience designing robots for high-reliability utility applications,” says Yogeeswaran.

The resulting ULC design comprises a pair of drive subsystems, a lift subsystem, and a rotation subsystem.

The robot’s drive subsystem comprises a pair of driven grippers that can be moved relative to each other to accommodate obstacles and conductor angles.

To pass an obstacle, the lift subsystem raises the payload and rotation subsystems from their normal cable wrapping position, which has a center of mass aligned with the power line, up to clear the obstacle.

During this operation, the robot is put in an unbalanced state, like a tightrope walker, and uses a stabilizer to balance itself as it crosses the obstacle, after which the payload and rotation subsystem are lowered, and the wrapping operation continues.

The robot also includes a vision system to identify obstacles and appropriately adjust its movements to clear the obstacles while maintaining the clearances required to prevent an electrical hazard.

The shape and material properties of the robot are currently being optimized for weight and safe operation on live lines.

Facebook says each robot will be capable of installing over a kilometer of fiber and passing the dozens of intervening obstacles autonomously in approximately an hour and a half.

To account for the human interaction steps such as setup, loading and unloading the robot, installing transitions, and so on, we have been conservatively estimating an overall build speed of 1.5 km to 2 km per robot per day on average.

Yogeeswaran says that, while a number of steps to complete before the first implementation of the robot, “we have confidence that this approach will yield a substantial improvement to both the cost and speed of fiber deployments”. 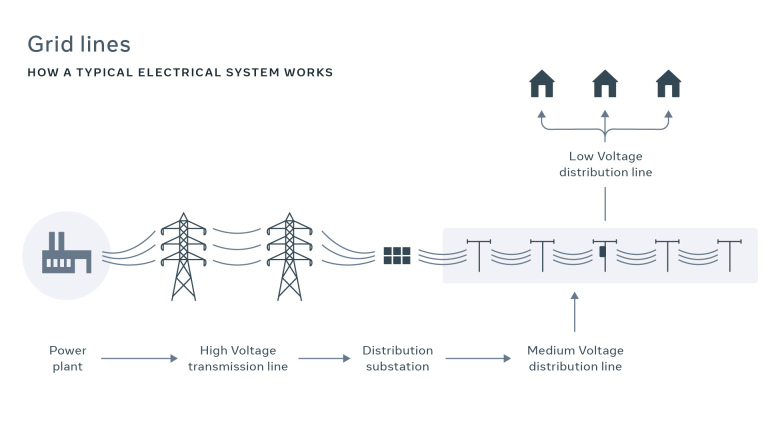 Possibly the most critical decision Facebook has made in the control test for this robot is that the internet will essentially take over, or at least superimpose itself, on the electricity network or grid of a country or few.