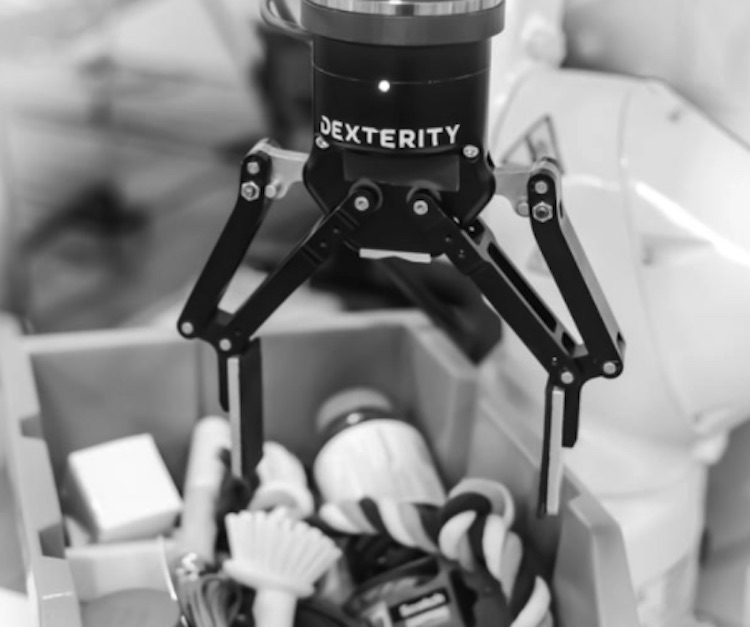 Dexterity has launched its “full-stack, hardware-agnostic” robotic systems for warehouses.

It adds that the robots utilize artificial intelligence, advanced control theory, computer vision, and the sense of touch to adapt quickly, making them safe to work alongside humans.

Dexterity simplifies automation deployments by managing the entire process for customers, from end-to-end system design and engineering to deployments with operational guarantees.

They are presently picking more than 200 unique items in production with 99.5 percent accuracy, and reliably pick a wide variety of novel objects including plastic bags, glass, perishables, and low-profile items.

Transcending other systems in the market, Dexterity robots can move, pack items using the sense of touch, and work collaboratively with one another.

For instance, two robots can collaborate to pick trays or crates, and even collaboratively move them across the work-area if required. Finally, the robots operate safely in concert with humans and maximize human productivity.

Samir Menon, Dexterity founder and CEO, says: “While robots are the backbone of manufacturing, they have historically lacked the ability to adapt and operate in dynamic environments like warehouses.

“Dexterity’s intelligent robots constantly adapt to warehouse operations and do the tedious and strenuous tasks, which maximizes productivity by enabling humans to focus on meaningful work.”

Founded in 2017, Dexterity’s technical approach has Menon’s PhD thesis in Robotics from Stanford University at heart.

Menon worked on a control theory framework to describe how the human brain controls and coordinates the body, which serves as a model to distill human skill into mathematical programs that control robots in a graceful human-like manner.

Dexterity is exiting stealth with deep customer relationships, and a fleet of intelligent and collaborative robots in production. In today’s world, with a pandemic raging, Dexterity is grateful to have an opportunity to serve the community as an essential business that, among other things, has shipped more than half a million units of packaged food.

Wen Hsieh, partner at Kleiner Perkins, says: “Technically, Dexterity’s robotic solution can do what their predecessors could not. Their robot’s ability to learn as it picks, packs, and places novel objects is unsurpassed.

“Dexterity also stands out because of their high-touch approach with customers, which includes gaining a deep understanding of customers’ needs, and then offering a Robots-as-a-Service offering.

“Dexterity is one of the very few companies in the world which has almost an unlimited market opportunity.

“When I first met Samir, I immediately knew he had the technical chops, the drive, and the vision to do something exceptional.

“In the short 2.5 years, Samir has assembled an exceptional team of some of the best and the brightest in robotics, built a strong tech stack that is generalizable, and delivered significant customer value.

“We’re excited to have partnered with Dexterity from day one and look forward to an exciting journey ahead.”

Dexterity develops its robots with a full-stack approach, combining both software and hardware.

Dexterity partners closely with customers to design systems and controls that match their individual needs and products, performing tasks such as fulfillment, kitting, sortation, singulation, palletization, and depalletization.

Its platform is highly modular – rather than being coded to perform one specific task, robots can be deployed anywhere on any warehouse use case, with grippers or suction cups to suit objects being handled, 3D camera systems to track items, and general machine learning models trained to identify arbitrary unknown objects.

By working with Dexterity robots, operators have become 47 percent more productive, and that improvement is growing over time as the robots learn and are more tightly integrate into local operations.

Dexterity robots can also work safely alongside or independently of humans and have the ability to comply and respond to human movement and interference.

“Samir provides a clear vision for the future of our robotic applications and gives us confidence that with this partnership, we can easily deploy our robots in a variety of ways.”

The warehousing industry urgently needs automation to do the tedious, laborious, and unsafe tasks that make it difficult to recruit and retain staff.

While supply chains continue to expand at a rapid pace driven by growth in e-commerce, interest in jobs that are repetitive and even dangerous continues to decline.

This trend has been further complicated by Covid-19 – increased volume, an exacerbated labor shortage due to health concerns, and the inability to guarantee safety for workers without heavily disrupting operations has amplified the need for automation.

Robots have been widely used in manufacturing, but they traditionally lack intelligence so they could only be deployed for precise pre-programmed tasks – think welding in auto manufacturing where the welds are in the same place for every car.

Dexterity enables human-like intelligence and dexterity to unlock a larger set of tasks in supply chain environments that have been previously unsolved by traditional robotics solutions.