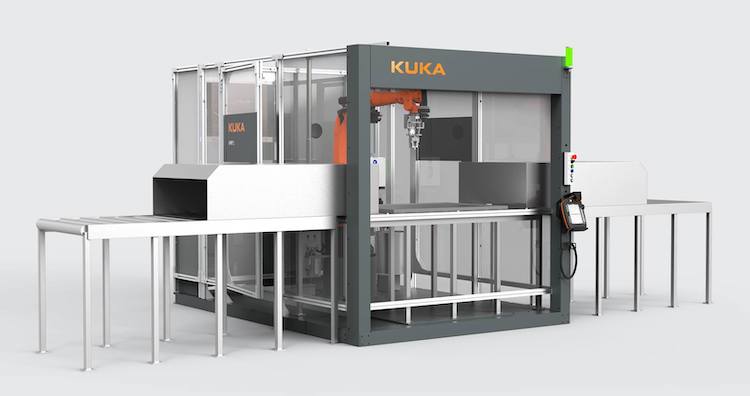 Kuka has launched a new robotic cell with pre-configured applications, or “packages”, as the company calls them.

The Kuka “cell4_production” systems are described as flexible production cells for automated processes.

The company says they feature highly flexible, modular in design, digitally networked and are “immediately ready for use”.

It adds that the underlying cell concept offers “powerful functions in preconfigured packages”.

Kuka says the customers can unpack, connect and start using the robotic cell “immediately”, adding that this simple credo, usually associated with commonly used electronic devices, now also applies to production processes in the manufacturing sector and the automotive industry.

With the new cell4_production series, Kuka says it presents preconfigured automation cells for a wide range of applications that can be “put into operation quickly with minimal effort”.

The company says this means global service, local support, integrated components and interfaces, worldwide delivery capability, and decades of expertise that goes into not only the cells themselves, but also into the consulting throughout the entire process.

Michael Otto, chief sales officer at Kuka Robotics, says: “The Kuka cell4_production series is the next step for the manufacturing sector and the automotive industry to increasing productivity and efficiency without major integration effort.

“As a reliable partner, Kuka has always developed global automation standards to allow customers and partners to achieve intelligent and efficient automation.”

With the new production cells, Kuka says it now offers everything from a single source: coordinated components and interfaces, a matching process package, training and service.

Due to the use of preassembled components, the Kuka cell4_production cells can be delivered in a very short time, says the company.

Furthermore, the cells remain transportable and can be relocated within the production environment at any time. Each robot cell also has a compact footprint, saving valuable space in the production facility.

With the cell4_production cells, Kuka says it offers entry-level prices and “low total cost of ownership” in combination with a globally available servicing concept.

Otto says: “Due to the seamless integration into existing production processes and the flexible adaptability of our cell concept, we increase efficiency from the outset.

The flexible manufacturing cells are also available in Kuka.Sim Pro for simulating processes and programming robots. This allows, for example, cycle time analyses and optimizations to be carried out digitally with the aim of increasing uptime and increasing productivity.

During this time, production can continue. The optimizations are transferred to the cell at a desired point of time and commissioned with minimal downtime.

Otto says: “The Kuka cell4_production series is the next step for the manufacturing sector and the automotive industry to increasing productivity and efficiency without major integration effort.”