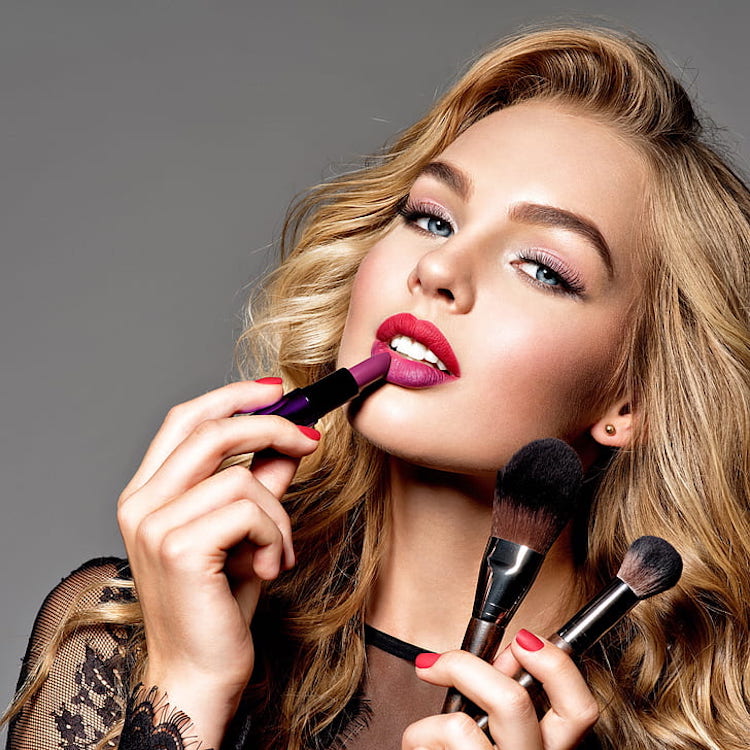 Engineering giant Siemens has developed a robotic system for the cosmetics industry.

The system has been named “the Hyve” and is described as an autonomous, modular robot platform.

The company adds that “multiple deployments” of the Hyve system are expected in factories by the end of this year.

The use of industrial robots in the UK is the same level as the global average, shown by the figure of 85 robots per 10,000 workers in the manufacturing sector in 2017. 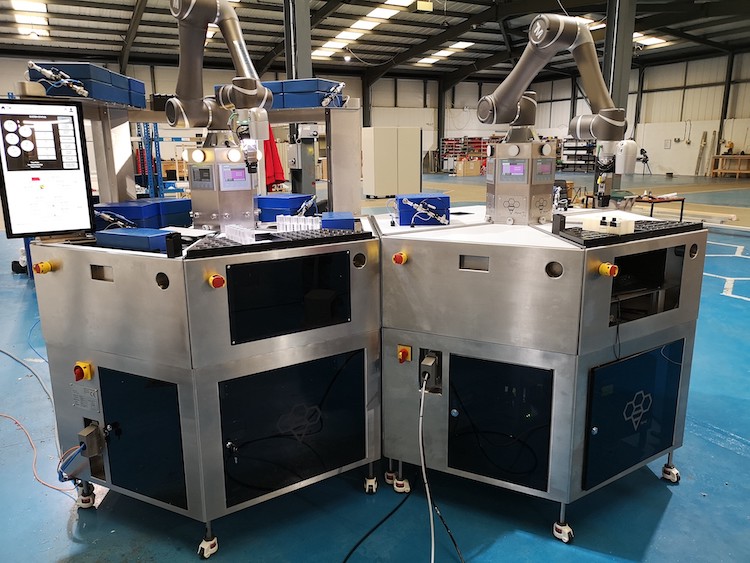 Europe has the highest regional density, with 106 industrial robots per 10,000 manufacturing employees, Germany leads the pack, followed by Sweden, Denmark, Belgium and Italy, who were all in the global top 10 in the 2018 figures released by the International Federation of Robotics.

Although these figures show that the UK is behind much of Europe in the adoption of this key digital technology, Middlesbrough-based Applied Scientific Technologies believes there is huge potential for collaborative industrial robots, a movement being driven by the evolution of Industry 4.0 and sister initiatives such as Laboratory 4.0.

The company recently deployed its first prototype Siemens-enabled modular robot, the Hyve, into the cosmetics industry.

Garry Lofthouse, director at Applied Integration and Applied Scientific Technologies UK, says: “The speed of design, development and deployment into this market could not have been possible without the industry standard connectivity and automation tools provided by Siemens.

“Siemens tools and interfaces lie at the heart of our platform and give the foundation upon which we can build customer processes and applications seamlessly and quickly into the Hyve platform.”

Since the launch of Hyve, the company has been inundated with potential applications and customers looking to exploit the collaborative nature of the system as part of their Industry 4.0 strategies and AST fully expect to deploy multiple Hyve robot platforms in 2020.

Lofthouse adds: “In 2017, we did our research and set up AST to serve what we believe has huge potential for robotics.

“Being in the integration market and a Siemens Solution Partner for over 15 years, we already had the know-how and technology to develop a new product to serve the manufacturing sector.

“The Hyve is an autonomous, collaborative robotic platform conceptualised to serve the consumer and life science industries and we have found huge scope for it already in the cosmetics market.” 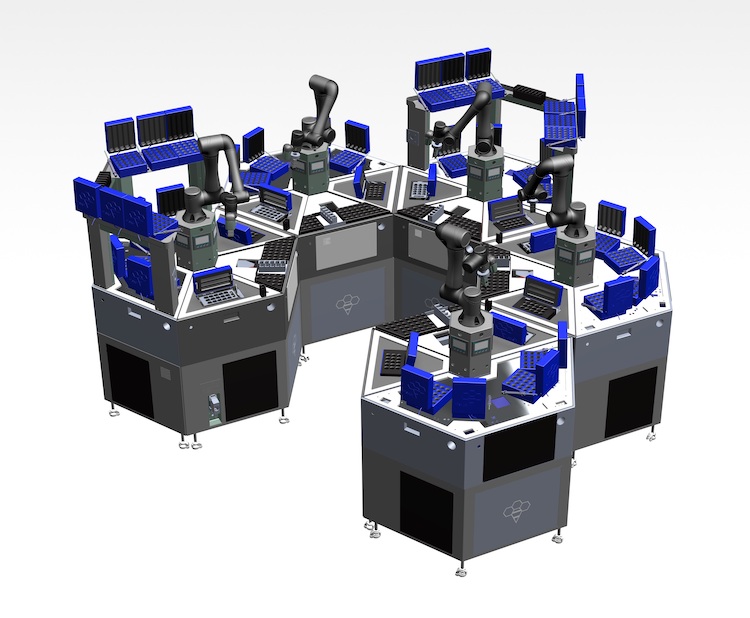 The unique, compact footprint of the Hyve allows extensive factory or laboratory processes to be integrated and automated. The co-bot mounted in the centre console, allows the entire bench area plus the additional 3D-space above the bench-area to be accessed.

Racking systems and the precise 6-axis robot allows the most inaccessible space to be accessed. Additional free-space under the platform itself and within each Hyve segment, allow much of the Siemens infrastructure and additional equipment / instruments to be installed under the top-surface maximising the available work-area.

In effect, Hyve is its own four-storey super-structure for processes and ancillary equipment installation.

Hyve is configured using Siemens Simatic S7-1200, S7-1500 and the WinCC Open Architecture technologies. They are embedded in the fundamental mechanism and performance of the Hyve platform.

Hyve was created using open architecture and thanks to the Siemens interfaces which allows communication with third party equipment is easily scalable and can even be accessed remotely for over-the-air updates, system diagnostics and/or performance indicators.

Alwyn Jones, head of pharmaceutical and life science, UK and Ireland at Siemens Digital Industries, says: “Working on a project like this has helped us solidify the Siemens and Applied Integration UK partnership.

“The Hyve has been well received by industry peers and was showcased in the last quarter of 2019 by special invitation at a leadership event arranged by a global Pharmaceutical manufacturer.”

Hyve can be a stand-alone system or operate together in a beehive-like architecture to form a production line, or a complete laboratory suite making it a paradigm shift in flexibility, modularity and configurability for such a robot platform in the market today.

The Hyve robot platform is designed to work alongside humans as a collaborative robot or co-bot and the sheer versatility of it means it can be configured for a variety of roles.

Hyve can play a larger role to support human activity at a plant in areas such as packaging and palletising and even support traditional laboratory automation processes usually confined to more dedicated equipment.

The Hyve autonomous, collaborative robotic platform is designed to work inside traditional laboratories without the need for clumsy programming tools and large safety-cage constructions.

The operator is perfectly safe and able to interact with the co-bot in ways unimaginable previously. The collaborative robot at the heart of the Hyve complies with the all the safety requirements for the collaboration of humans and robots and as specified in ISO 10218 and ISO/TS 15066.

Since its installation in one of the world’s leading beauty, cosmetics and personal care companies, it is being used for product stability, says Siemens. 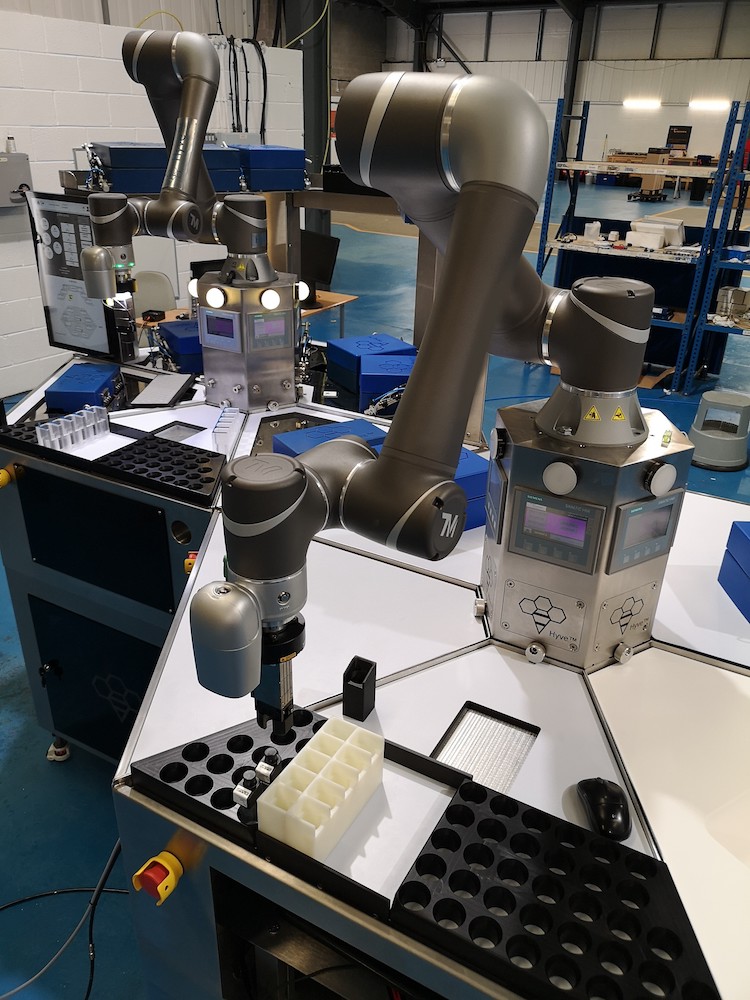 Lofthouse says: “By introducing the Hyve to the laboratory testing arena it has helped in stability studies and extracting analytics that were otherwise impossible or took 10 times longer.

“Previously data was available to the operations team after two to three years. This is significantly reduced, results now seen in to two to three months.

“The impact of environmental conditions and accelerated testing scenarios on the product is crucial, ensuring quality manufactured goods are developed having the longevity and shelf-life required by both manufacturer and the consumer.”

Lofthouse further explains that, in the manufacture process, it is important to have a complete understanding how the product will react under defined conditions such as sunlight, mechanical vibration and temperature variations and so on, and that the implementation of the Hyve, has helped ensure that products are not produced with any chemical imbalances.

The use of Simatic S7-1200 and S7-1500 allows simple, standardised and secure connectivity across all levels.

This software solution is vendor- and platform-independent OPC Unified Architecture (UA), the communication standard for Industry 4.0 and the standard mechanism for vertical communication and the horizontal data exchange between machines to machines (M2M).

Further incorporation of SIMATIC WinCC Open Architecture allows The Hyve to be used for applications of large-scale and high complexity as well as projects with special requirements for system prerequisites and customised functionality.

This makes Hyve autonomous, collaborative robotic platform one of the most scalable and versatile products available to manufacturers and offers the option for multi-plant operators to use it on IoT cloud-based software like MindSphere.

Applied Scientific Technologies says it is currently working in the factory on “further deployments and totally new applications”.

Lofthouse suggests that there was yet another untapped market for Hyve.

He says: “While early adopters and deployments for Hyve have focused on cosmetic products and packaging, we have produced the Hyve with a view for use in the more regulated industries such as pharmaceuticals making it ideal for deployment in pharmaceutical laboratories or manufacturing.”