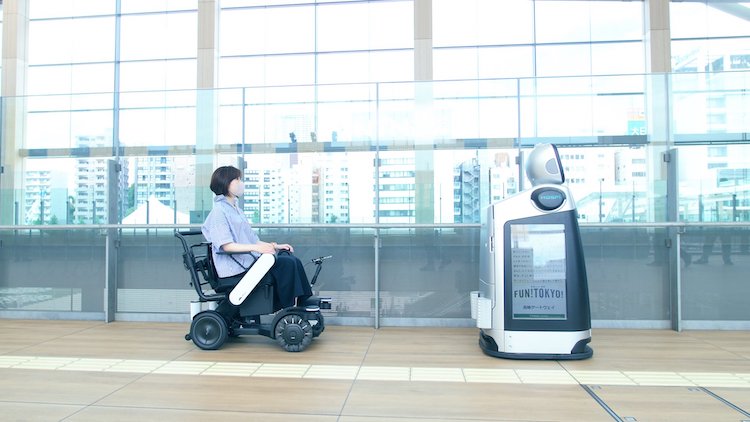 Panasonic is partnering with JR East Mechatronics to conduct trials for station services using robots at Takanawa Gateway Station, which opened in March, this year. (See video below.)

The trial was intended to provide guidance and help passengers with limited mobility move easily. This was the second trial of the autonomous robots at a train station, following the first one at Saitama-Shintoshin Station in December, last year.

East Japan Railway Company, the parent of JREM, positions Takanawa Gateway Station as the entrance to a new hub for international exchange planned around the station.

It also serves as a showcase of the future station, providing a testbed for cutting-edge technology and station service equipment, such as robots, an unmanned store with automated AI payment systems, ticket gates with QR code scanners, and a large-scale digital signage called the Railway Terrace Vision.

The trial involved one each of Panasonic’s guidance robot named HOSPI Signage and robotic mobility device – an electric wheelchair with autonomous tracking function.

HOSPI Signage not only can move autonomously but also detect people and obstacles even in crowded airports or stations and decide to slow down, stop, or go around by itself.

HOSPI Signage attracted attention of the crowds in the station as it moved autonomously at the concourse inside the gates on the second floor of the Takanawa Gateway Station at the speed of 2.5 km per hour according to preset maps and routes, while displaying warnings and measures against infectious diseases and station advertisements on the liquid crystal display on the three sides of its body.

Moving signage attracts three times more attention than the fixed type, and is expected to improve advertising value as a communication medium.

In addition, through its display-based face as well as voice, HOSPI Signage guided passengers to the restroom or elevator in Japanese and English.

The robot can also lead the self-driving wheelchair to programmed destinations, helping people with limited mobility.

The robotic mobility device, which automatically follows the path of HOSPI Signage, has a safety control function so that it automatically stops when detecting people or obstacles in its path.

This trial of the robot that can autonomously move and guide people demonstrated an advantage as a service accessible without human intervention.

The trial received positive feedback from station users who took a test ride on the robotic mobility device, such as “it is a useful service especially for those who are physically handicapped” and “I also want to use it at sightseeing spots or theme parks”.

There was high expectation from the service provider as well. A person from JREM who is responsible for the station service said, “We think robots are promising in order to meet the diversifying customer needs and further improve train station services.”

There are increasing need for labor-saving technology to cope with labor shortages due to the aging population, as well as rising demand for non-face-to-face services because of the Covid-19 pandemic.

Panasonic says it will continue its efforts to develop and refine robotics technology to solve such social issues and provide services suitable for the “new normal”.