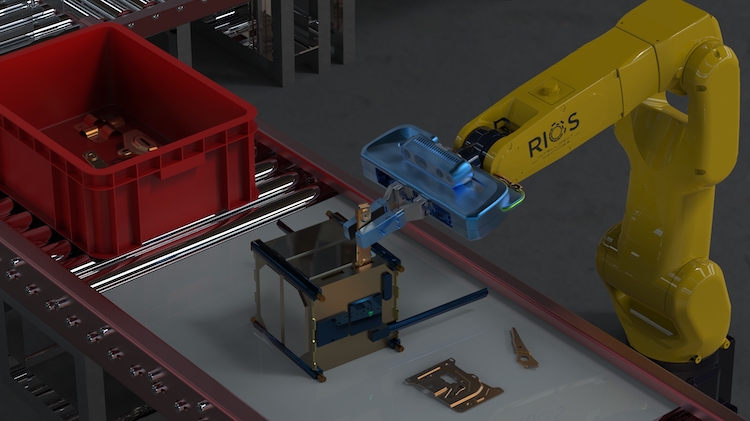 RIOS, a developer of dexterous AI-powered robots for automating assembly lines, has come out of stealth mode and raised $5 million in venture funding.

RIOS, which spun out of Stanford University and was founded by former Xerox PARC engineers, helps customers automate their factories, warehouses, and supply chain operations by installing what it describes as a “new class of highly-dexterous robots” that handle hard-to-automate tasks in unstructured environments.

RIOS not only automates individual lines, but also builds “lights out” factories by partnering with its network of systems integrators.

The investment was led by Valley Capital Partners and Morpheus Ventures, with participation from Grit Ventures, Motus Ventures, MicroVentures, and Alumni Ventures Group.

Dr Bernard Casse, CEO and founder of RIOS, says: “We’re building robots of the future – ones that can learn on the job, construct models of the world, and extend these models to perform different tasks in unstructured environments.

“We’re excited to come out of stealth mode and look forward to deploying our robots on a massive scale across every industry.

“With a first-of-its-kind haptic intelligence platform combining dedicated hardware, computer vision, and AI, our robots can learn to grasp and handle many types of objects, precisely selecting and assembling parts and performing complex manipulation tasks.”

The RIOS’ robot platform consists of an AI-driven perception system (eye), a central AI (brain), and a purpose-built intelligent end-effector (hand) powered by the world’s most advanced tactile sensors.

RIOS first product, DX-1, is a full-stack, multi-purpose robot able to perform a broad range of tasks, from pick-and-place of arbitrary objects to complex component assembly – a skill set largely unseen in the robotics industry until now.

DX-1 can interact with objects in both static and dynamic applications, such as bin picking and moving conveyor belts.

The sensor data are processed by embedded processors running RIOS’ proprietary AI algorithms to give the robots “human-level dexterity”.

Steve O’Hara, managing partner at Valley Capital Partners, says: “RIOS is the rare robotics company that combines unparalleled technical horsepower, from a founding team of skilled PhD engineers, with a massive addressable market and an experienced leader at the helm.

“We believe in Bernard’s vision for automation-as-a-service, recognize the potential for wide-scale global deployment of RIOS’ dexterous robots in many environments, and have seen firsthand how the company’s highly-intelligent robots can manipulate many types of objects with the incredible dexterity of a human hand.”

RIOS says it is industry agnostic. Its robots possess higher levels of dexterity, cognitive skills, and autonomy than existing industrial robots, which allow them to be easily programmed to perform a wide variety of tasks across different industries, handling thousands of SKUs in any environment.

Most other industrial robots are scripted to perform single repetitive tasks on tightly-controlled assembly lines.

In pilots, DX-1 quickly learned to adapt to multiple use cases in manufacturing, automotive assembly, lab automation, and food services.

While in stealth mode for the last 18 months, RIOS built its technology stack from the ground up and has nurtured relationships with global customers and partners to develop its solution.

Howard Ko, principal at Morpheus, says: “While others in the space are tackling simpler use cases like pick-and-pack, RIOS has combined its haptic and perception capabilities to deliver a next-generation solution today.

“The RIOS robot does complex autonomous manipulation that enables it to easily integrate into existing assembly lines to deliver a real-world increase in productivity and cost savings.”

This flexible model eliminates upfront capital costs and allows facilities to add automation to their facilities quickly and cost-effectively.