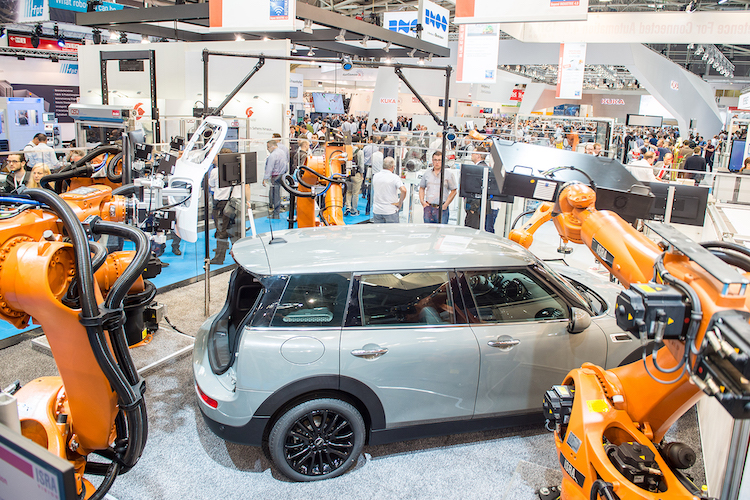 Robots provide opportunities for a restart of the economy after the damage caused by the coronavirus pandemic, according to industry leaders surveyed by Automatica, one of the largest industrial automation trade shows in the world.

Messe Munchen, which owns Automatica, says it did a survey and found the following:

Even before the corona pandemic, the manufacturing industry in Germany was highly automated according to figures from the International Federation of Robotics and ranked third in robot density worldwide behind Singapore and South Korea.

This trend is likely to continue after the Covid-19 crisis.

The most important advantages of robotics for approximately 80 percent of industrial decision-makers include the following aspects:

To cope with the current crisis, the “machine helpers” are once again in the focus of executive boards. These are the findings of the automatica Trend Index.

In the run-up to the world’s leading trade fair for intelligent automation and robotics automatica (in Munich from December 8 to 11), 100 industrial decision-makers and 1,000 employees were surveyed by a market research institute in Germany.

“Industrial companies with robots can selectively automate individual work steps to ensure social distancing in production,” says Patrick Schwarzkopf, managing director of the VDMA Association of Robotics + Automation, on the contribution of industrial robotics to beating the Covid-19 crisis.

“Right at the beginning of the Covid crisis, several pharmaceutical customers in Europe, the US and Asia asked us to support a rapid increase in their production so that they can operate duplicate lines for diagnostic kits as quickly as possible,” says Jean-François Bauer, head of business development at the Swiss specialist for assembly solutions Mikron Automation.

“At the same time, we expect that strategic decisions from the past will be reconsidered after the recent pandemic experience.

“For example, dependencies in supply chains should cause companies in Europe or the US to build new capacities in their domestic markets with the help of robotics and automation to reduce identified weaknesses.”

The automatica Trend Index also shows that flexible production with industrial robots is likely to be used increasingly by German SMEs in the future.

In their forecast, 84 percent of industrial decision-makers expect that the increased use of robotics in medium-sized enterprises is not a question of “whether” but of “when”.

Eighty-one percent say that robot programming has become easier, paving the way for use in small and medium-sized enterprises. On the other hand, two-thirds of those responsible believe that an obstacle is that their own employees still lack the necessary training for robot operation.

Employees have a positive attitude

Employers can rely on a fundamentally positive attitude on the part of employees: A good three-quarters of employees consider training in the handling of robotics to be an important offer from (medium-sized) companies.

Equally many say that companies stand out as attractive employers for skilled workers if they provide training opportunities for robotics and digital technology.

At automatica 2020 in Munich from December 8 to 11, decision-makers will have the opportunity to examine the potential of robotics for fulfilling their own goals.

Anja Schneider, exhibition director at automatica, says: “The most important suppliers and experts will provide information on what robotics and automation can do today to maintain and increase competitiveness in the new market environment, in line with the special requirements of a wide range of industries.”

The automatica trend index was conducted by a market research institute and consists of two sub-surveys:

For Part 1, in early 2020 a total of 100 specialists and executives in Germany were interviewed, who make decisions concerning robotics and automation in industrial companies.

For Part 2, in early 2020 a total of 7,000 participants representative of the population were surveyed in seven countries about how robots and digitization are changing the world of work: USA, China, Japan, Germany, France, Italy and the United Kingdom.