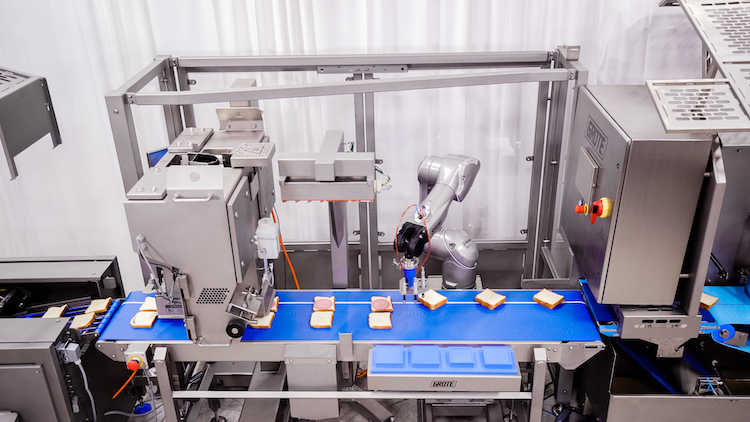 US-based company Grote specializes in automating production lines that slice, fill and cut sandwiches. Until recently, the upper and lower halves of the sandwich were put together manually. Now, Grote has managed to automate this process as well, using a Stäubli TX2-60 HE six-axis robot with wash-down capability.

Filling a sandwich is not a particularly arduous task. That is, unless it is being done on an industrial scale with a throughput of thousands of sandwiches per hour.

The raw materials – slices of sausage, cheese, tomatoes and lettuce – can be difficult to handle and the assembly process consists of many steps that can vary for each product.

For these reasons, often only some steps, such as feeding bread to the line, adding condiments, dosing wet salads, applying sliced meats and cheeses and cutting the bread, fillings, and end sandwich are automated.

One American business is making a determined effort to further automate the process. Founded in 1972, the family-run Grote Company of Columbus, Ohio has established a global reputation as a specialist in the mechanization of sandwich making.

Their range of machines includes slicers for fillings such as sausage, ham and cheese, as well as bread feeders and cutters, depositors for semi-liquid condiments and wet salads, and cutters for the final sandwich product.

Grote sees itself as a technology leader in this area of food processing. The systems it supplies are always tailored to the individual requirements of the user, which means its engineering department is heavily involved.

At the same time, Grote’s innovative designers test new ideas and develop them to the series-production readiness stage. For example, their latest innovation – the “Robotic Sandwich Assembly Line”, a name that speaks for itself, is attracting a lot of attention in the industry.

Sandwich production at a rate of one per second

At the heart of the assembly line is a six-axis robot, the Stäubli TX2-60 HE. A conveyor belt delivers the sandwiches to it as two halves – the bottom slice, already buttered and filled, and the top slice, which is only buttered. The robot picks up the top slice and places it on the filling on the bottom slice. The sandwich is now whole.

Next, the robot rotates the sandwich 45 degrees and positions it diagonally on the conveyor belt. It then proceeds to the last station, where the sandwich is cut in half or quarters in the desired configuration, i.e. horizontal, diagonal, etc. Now the snack is ready for packaging.

The robot gripper is guided to its target using 3D image processing. The gripper itself was developed in-house by Grote. It enables reliable handling of the sandwich’s top slice, which is pliable in nature and thus difficult to grasp firmly.

The entire production line complies with the principles of hygienic design. All edges are rounded, so there are no dead spaces where debris can build up, and the sandwich production line can withstand even the harshest cleaning procedures.

To ensure maximum availability, Grote opted firmly for a Stäubli HE (Humid Environment) robot. The TX2-60 HE complies with protection class IP 67, with all cables being routed inside the housing, from pedestal to gripper.

Bob Grote, CEO of Grote, explains why the management team chose the Stäubli robot: “We have already had good experiences with Stäubli on other projects, both in terms of support during the project planning and with the robots themselves.

“The hygienic design of this robot series was also a requirement. The entire cell is regularly sanitized with hot water and chemical cleaning agents.”

Whereas this routine would soon push a conventional standard robot beyond its limits, the Stäubli TX2-60 HE six-axis robot takes such rigors in stride. As an HE version, it is optimally prepared to withstand sprayed water, and protected by meticulously implemented modifications.

These variants are designed for applications subject to the strictest hygiene standards, in which the robots undergo regular cleaning processes with aqueous media.

In addition, all Stäubli HE robots can be ordered and supplied to operate with food-grade NSF H1 oil. One special advantage is that even with the use of this lubricant, the robot achieves optimal performance, which is undiminished over time.

The combination of HE and H1 capabilities offers the perfect solution for robots that come into contact with unwrapped food.

The dynamics of the TX2-60 HE, in particular the high speed on the sixth axis, were another decisive factor in selecting the robot.

Grote says: “60 sandwiches per minute, per lane was the target. The robot is reaching its limits here, because it is performing multiple motion sequences.

“Straightforward programming was also a requirement. After all, Grote used its own resources to develop, build and program the robotic cell.”

A future market for robotics

Grote’s “Robotic Sandwich Assembly Line” can be integrated into existing production systems or operated as a stand-alone cell. In either case, the user benefits from a high degree of automation combined with high flexibility.

The robot can take on additional tasks and produce various types of sandwiches with a quick program and gripper change.

Using a variety of pneumatic and mechanical grippers, the system achieves an impressive level of flexibility and is capable of handling both rectangular and round sandwiches as well as wraps.

Grote says: “We are convinced that robotics will play a major role in automated food production in the future. We see ourselves as pioneers in this regard, and we intend to apply this principle in other areas, for example in the topping and handling of frozen pizzas.”

Main picture: Plant overview – The “Robotic Sandwich Assembly Line” can be integrated into existing production systems of operated as a stand-alone plant.