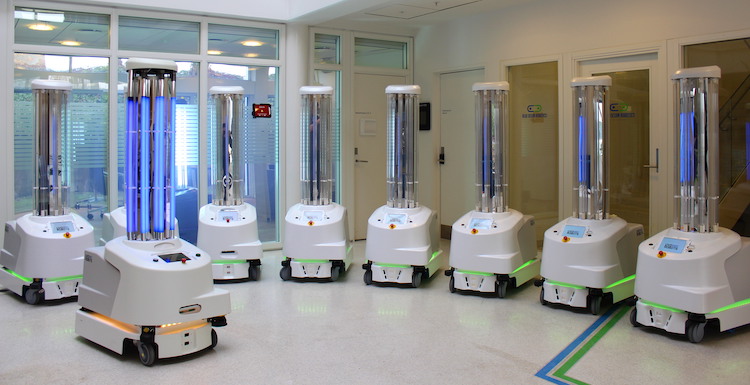 Blue Ocean Robotics and its ultra-violet disinfecting robots have been recognised as Top 50 Most Influential Robotics Company by Robotics Business Review.

The company says it is experiencing “continued global growth” as disinfecting robots are used as effective weapons against coronavirus and hospital acquired infections.

Christiano Huscher, chief surgeon at Gruppo Poloclinico Abano, which operates a number of private hospitals in Italy, says: “Before we received the UVD robot, six of the hospital’s doctors had been infected with Covid-19.

“Since we started using the robot two months ago to disinfect, we have not had a single case of corona among doctors, nurses or patients.”

UVD Robots is seeing not only growing interest by hospitals worldwide, but also from nursing homes and other healthcare institutions, schools and day care centres, with increased demand from shopping malls and commercial airports as well.

Blue Ocean Robotics announced it has been included in Robotics Business Review’s list of the 50 most influential robotics companies in the world (RBR50) for its UVD Robots.

The recognition was earned for work with UVD Robot, the health benefits of its technology and the continued growing demand for its disinfecting capabilities.

“UVD Robots has more than 75 percent of the world market of autonomous mobile UV-C disinfection robots.”

UVD Robots combines deep microbiological know-how, autonomous robot technology and ultraviolet light to create the world’s best UV-C based disinfection solution, proven to eliminate pathogens within 10-15 minutes in a room. The robots have been rolled out to more than 60 countries worldwide.

“With the anticipated future growth, our 2-4 year lead on competitors with patented solutions, we are the dominant player for the future.”

Founded through a collaboration with Odense University Hospital, Blue Ocean Robotics created UVD Robots as a subsidiary in 2014 to solve the problem of hospital acquired infections. One in fifteen people get infected in hospitals.

Eugene Demaitre, senior editor at The Robot Report and Robotics Business Review, says: “The solution was introduced to the market even before the Covid-19 pandemic, and since then UVD Robots has been able to scale its production to the growing global demand for automated disinfection.

“We expect that the Danish RBR50 company will, in the future, help both hospitals and other localities prevent infections as well.”