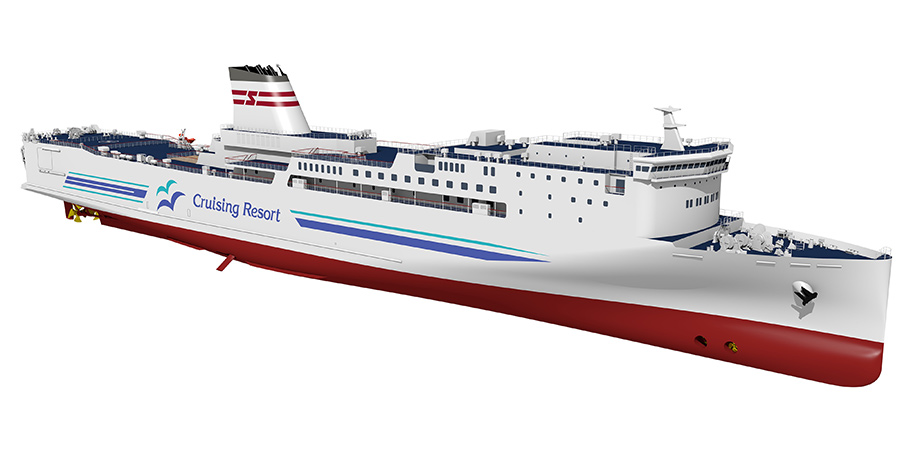 The two companies have successfully applied for grant aid under the Joint Technological Development Programme for the Demonstration of Unmanned Ships, sponsored by The Nippon Foundation.

With this support, the two companies say they will commence co-development of underlying technologies and systems to enable unmanned ship navigation in the future.

The resulting prototype system will be installed on a vessel to be operated by Shin Nihonkai Ferry and undergo verification via demonstration testing in Japanese coastal waters.

Once the development phase has been completed, the prototype unmanned navigation system will be installed in a large high-speed car ferry ordered by Shin Nihonkai Ferry (main illustration), to be built at the Tategami Main Plant of MHI’s Nagasaki Shipyard & Machinery Works.

Demonstration testing of the new system will be performed for approximately one year, starting from ship delivery scheduled for end-June 2021 through May 2022. During this phase, crew will be on board to monitor operations and ensure safety.

Mitsubishi Shipbuilding has been developing automation systems to assist ship navigation and cargo handling since the 1990s.

Under the new development program, the company will collaborate not only with Shin Nihonkai Ferry but also with academic institutions, IT businesses and control system engineering firms in the design, construction and total verification of a large car ferry which integrates advanced unmanned navigation technologies.

For example, remote diagnosis technologies developed by MHI Group for large-scale equipment will be integrated to achieve unmanned operation of the ship’s propulsion plant.

By resolving such issues, the company will contribute to the ongoing development of marine logistics and ocean transportation.