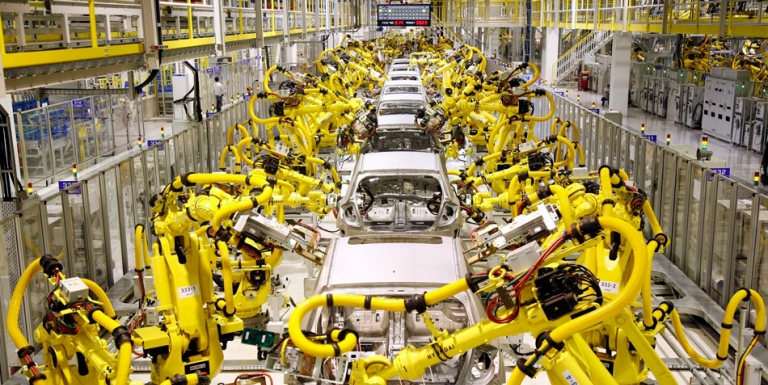 By Maya Xiao of Interact Analysis

The coronavirus pandemic which has devastated economies worldwide is expected to reduce revenues in the industrial robot market by more than 8 per cent, according to a study by Interact Analysis.

“After a weak 2019, we originally expected the 2020 robot market to recover strongly, but Covid-19 changed the market revenue growth forecast from 4.8 percent to -3.6 percent,” writes Maya Xiao, automation market expert at Interact Analysis.

Global industrial robot shipments experienced negative growth for four consecutive quarters from mid-2018, she says. At the end of 2019, recovery signs appeared, and the mid-term growth rate turned positive. This turnaround happened in the context of a continued slowdown in general global manufacturing activity, which led to weak spending on machinery and automation equipment.

By 2020, the industrial robot market’s rate of decline had further narrowed and investment in industrial robots was projected to pick-up, with stronger growth projected for the year. The outbreak of Covid-19 changed all this. 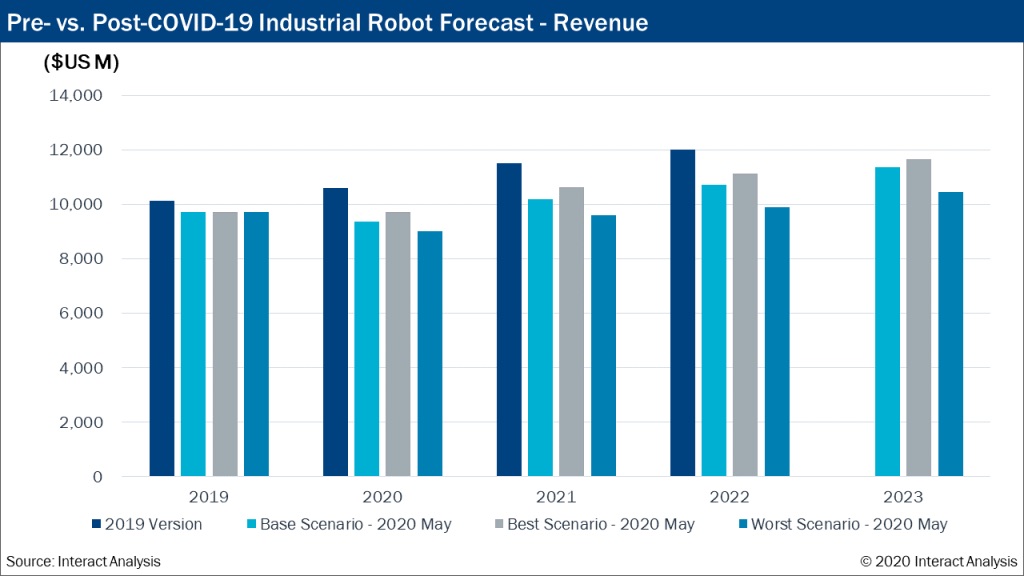 To reflect the rapidly changing nature of the Covid-19 situation, Interact Analysis has produced neutral, positive, and negative scenarios. The pandemic will lead to a long-term increase in rates of factory and warehouse automation but, even in the best possible case scenario, we do not expect revenues to return to Interact Analysis’ pre-Covid forecast rates before 2022.

Interact Analysis’ new base scenario predicts that the global industrial robot market will drop by 3.6 percent in revenue, and by 3.7 percent in shipments during 2020 (compared to a pre-Covid forecast of positive growth of 4.8 percent and 7.7 percent respectively). A strong rebound in 2021 is projected, with end users advancing automation plans and projects that were delayed in 2020.

All three scenarios suggest a rebound from 2021, albeit in the worst case at a slower pace. The worst-case forecast assumes a much longer pandemic which cannot be contained during 2020, and therefore leads to a prolonged period of high unemployment and low wage growth.

Collaborative robots are expected to maintain a double-digit growth rate in terms of both revenue and shipments throughout 2020. Growth for all other types of industrial robots is either negative or flat. Applications in non-manufacturing environments (such as logistics, and service industries) will be hit harder but they will also recover faster.

In addition, many collaborative robot manufacturers are concentrated in Asia, meaning they are further through the crisis than their competitors and customers in non-Asian markets.

Not surprisingly, the European and North American industrial robot market saw a sharp decline in the first quarter of 2020. Many manufacturers announced revenue declines of more than 10 percent. This is expected to deepen in the second quarter since local production remains heavily impacted by shutdowns.

However, the performance of robot manufacturers in Asia, especially Japan, China, and Taiwan, was unexpectedly strong in March and April. On the one hand, they are still digesting some historical orders from the last quarter of 2019, along with urgent orders due to unexpected pandemic-related demand.

On the other hand, Asian suppliers are benefiting from new custom as a result of European and American suppliers having to stop production. However, all suppliers, in Asia and elsewhere, are cautious about prospects in the second half of 2020, and Interact Analysis is not overly optimistic about overall growth rates for the year.

Automotive has been particularly hard-hit (despite some large robot orders of 1,000+ units still being announced). There is no sign of improvement in traditional automobile manufacturing, and most new production-related investments are associated with new energy vehicles (largely for production of automotive electronics and lithium-ion batteries).

In the scope of Interact Analysis’ report, robots used in automotive electronics and lithium ion battery production are not attributed to the automotive industry, and most production is in Asian countries. Collaborative robots have had strong growth in these areas in the last 12 months.

Industries that were already highly automated, such as semiconductors, were less affected by the Covid-19 lockdown. Hence, Covid-19 has joined other factors, such as general long-term labor shortages in many countries, as a reason for increasing interest in automation amongst manufacturing companies.

After this crisis, many industries will consider re-aligning supply chains to allow localized manufacturing of critical components. They will also look at increasing overall levels of industrial automation. The industrial robot industry will certainly benefit from this trend.

Covid-19 is postponing but not obliterating the rebound of industrial robots and will strongly promote the growth of the robot market in the long-term. 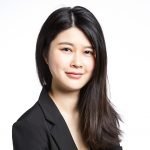