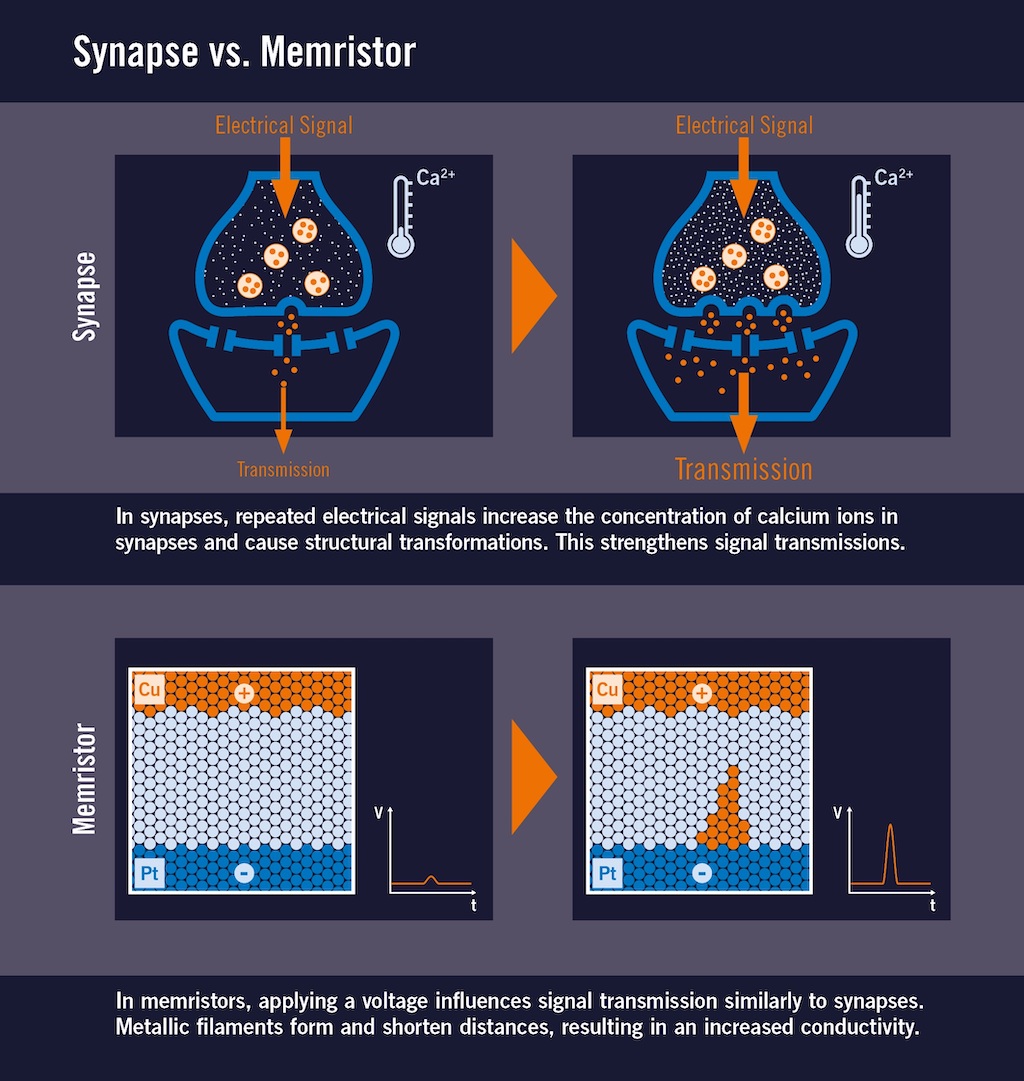 The boffins discovered how the switching properties of artificial synapses can be specifically influenced.

They explain that “memristors” – electrical components that can be switched between a low and high value like a “resistance with memory” – are considered a promising alternative to conventional components in computer chips.

In principle, the these memristors function “like a synapse of the biological nervous system” and also get by with an extremely small amount of electricity.

Dr Ilia Valov from the Peter Grünberg Institute at Research Centre Jülich, says: “Memristive elements are regarded as ideal candidates for neuro-inspired computers modelled on the brain, which are arousing great interest in connection with deep learning and artificial intelligence.”

The components with which the research team has conducted systematic experiments consist of an ultra-thin, amorphous fused silica layer (silicon dioxide) between a platinum and a copper electrode.

In the current issue of the open-access journal Science Advances, the researchers describe how the switching properties of memristic components can be specifically influenced.

According to this, the purity of the central oxide layer is the decisive factor: the researchers have deliberately introduced foreign atoms into the 99.999999 percent pure (8N) silicon dioxide (doping).

Dr Christian Neumann of the Heraeus technology group, says: “By introducing foreign atoms, we influence the solubility and transport properties of the thin oxide layers.”

This effect had previously been unnoticed by experts. It can be used specifically for the design of memristic systems, similar to the doping of semiconductors in information technology.

The specifically-doped glasses were specially developed and manufactured by fused silica specialists Heraeus Conamic, which also holds the patent for the materials.

With the help of the insights gained, manufacturers can now specifically develop memristive elements with the desired functions.

This is because memristive elements behave in a similar way to their biological role model: the brain’s ability to learn and remember is largely due to the fact that the connections between nerve cells become stronger, so to speak, when they are used frequently.

In artificial synapses, conductivity increases with the number of incoming voltage pulses.

The scientists say that the proof of their theory is in the “new record” achieved in switching time.

There are different variants of memristive components such as electrochemical metallization cells (ECMs) or valence change cells (VCMs).

Based on their series of experiments with ECMs, the researchers were able to show that the switching times change with the amount of foreign atoms.

If the middle layer consists of 8N silicon dioxide, the memristive component switches in “1.4 nanoseconds”, claim the Hereaus researchers and their fellow eggheads. That is significantly faster that the fastest value ever measured with ECMs, which was about 10 nanoseconds.

By doping the oxide layer of the components with up to 10,000 parts per million of foreign atoms, the scientists have specifically extended the switching time into the range of milliseconds.

Based on generally applicable theoretical considerations, supported by experimental results documented in the technical literature, the research team is convinced that the doping effect occurs not only in ECMs and VCMs, but in all memristive elements.

The research results on this topic can be found in the original publication, Design of defect-chemical properties and device performance in memristive systems, Lübben et al, Science Advances, 2020