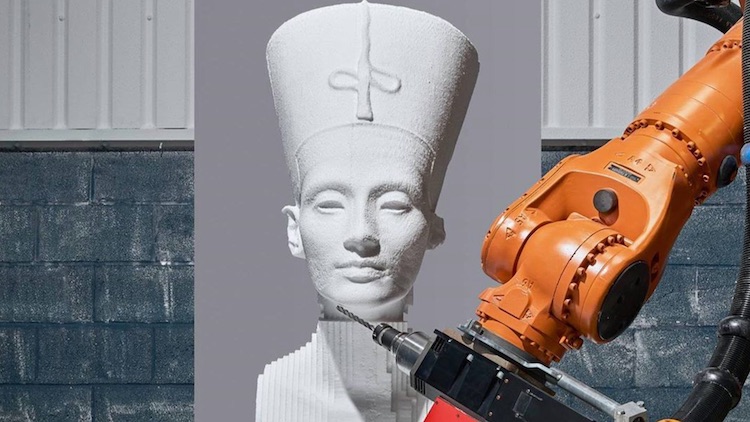 The Kuka robot mills the props from blocks of plastic. (See video below.)

With books, readers can use their imagination to view the events in their own mind. That does not work with film.

There, everything needs to look authentic – from Roman sandals in historical films to revolvers in Westerns and even fantastical furniture in science fiction fare. 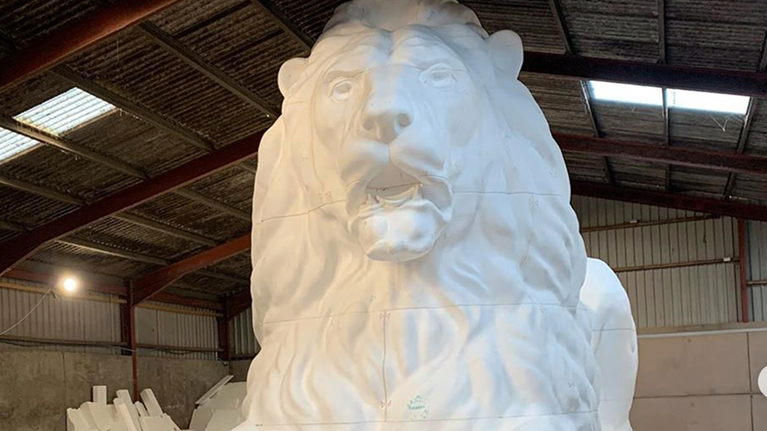 Creating film props and sets can be rather costly and time-consuming.

The English company Robocarv offers a solution for this.

As the name already implies, it uses a Kuka milling robot to manufacture everyday objects from the past or future – which look astoundingly realistic – from blocks of plastic.

The Kuka robot mills a polystyrene bust for Hollywood.

Using a scanner, templates are captured and fed into the robot, which produces whatever the filmmakers need at the touch of a button. A copy of the bust of the Egyptian Queen Nefertiti? No problem.

Liam Carr of Robocarv says: “This is the future of film art departments – and we’re already experiencing it.”

The robot is capable of milling film props with “utmost precision”, says Kuka.

In a few hours, the robot type KR 210 L180, now part of the KR Quantec series, mills sculptures and other props from blocks of polystyrene.

In their normal state, plastics are lightweight and easy to process. Once the figure is finished, it is coated with a special layer of resin.

The material hardens and is then robust enough to withstand all of the rigors of filming in Hollywood.

And the special feature of robot props: Robocarv recycles the material after filming, removes the protective layer and presses the foam into new blocks.

This also makes manufacturing interesting in terms of price.

This 15-meter-high lion was manufactured using a robot. Image: Robocarv

The largest sculpture that Robocarv has manufactured so far is a 15-meter-high lion for the movie version of the musical Cats, which recently appeared in theaters.

Liam Carr says: “There will always be props that have to be manufactured by hand. But for nearly perfect, geometrically precise products, we use the precision of the robot.

“Time in film production is a limited commodity. Our robot manufactures nearly perfect copies of props within an hour.”