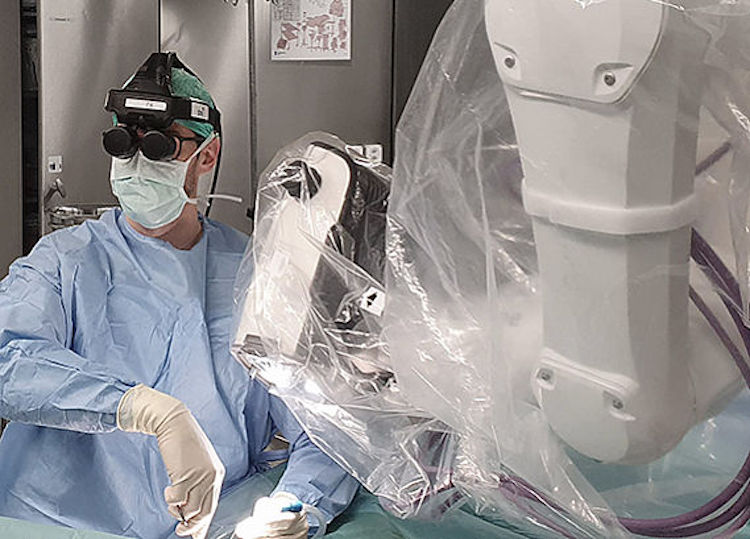 A Swiss company called BHS Technologies has unveiled a specially designed robot to assist surgeons, claiming it to be a world first.

“A high-precision robot, a high-resolution 3D camera and an innovative head-mounted display – the world’s first RoboticScope has arrived on the market,” says the company, adding that it “sets new standards in microsurgery”.

As BHS says: “The surgeon can intuitively control the microscope with head movements. A change of perspective can be intuitively done moving the head.”

This hi-tech development gives surgeons insights previously thought impossible and is set to “revolutionize the way they work at the operating table”, says the company.

Classic ocular lenses and microscopes are increasingly reaching their limits. Their lack of flexibility is reducing their ability to meet the demands in modern microsurgery.

BHS Technologies, based in Innsbruck, says it has set out to equip surgeons with a tool that provides a completely new perspective in the operating field while allowing them to work in a comfortable, ergonomic position.

The success of BHS in realizing these objectives is demonstrated by the functionality of the RoboticScope, also known as AMP.

The surgeon looks directly into the operating field via a Head-Mounted Display (HMD).

The two digital microdisplays integrated into the HMD directly in front of the surgeon’s eyes show high-resolution, real-time 3D images relayed by the dual camera lenses mounted on a six-axis Stäubli TX2-60L.

The position of the robot determines the visible image, allowing the surgeon to operate in a freely selectable and completely relaxed head position.

Using this method, the surgeon can select the viewing angle of the 8x zoom lenses and even control a sophisticated menu from a microdisplay, allowing the activation and control of further functions.

The high-precision Stäubli TX2-60L delivers “jerk-free motion sequences of the AMP”. Also, its enclosed build means that the six-axis machine already complies with cleanroom class ISO 5, allowing BHS to save on the potential extra costs of upgrading to a cleanroom version.

Within the operating theater, the TX2-60L is covered with a sterile sleeve, preventing any particle emissions.

Furthermore, Stäubli’s proprietary CS9 control systems, with its pioneering safety features, are perfectly suited for HRC (human-robot collaboration) scenarios such as these.

For the other components, BHS either sources from leading suppliers or manufactures the parts in house, for example the stable mobile base for the robot and the 8x zoom lens.

The overall performance of the RoboticScope is impressive; the produced imaging is perfectly suited for the high demands in microsurgical operations.

An interesting feature called Orbit Mode allows the surgeon to focus the camera on an anatomical structure and have the robot rotate the camera around it.

The surgeon can examine the structure in detail from all perspectives and has a complete overview. This gives dynamic surgery a whole new meaning.

BHS has succeeded in keeping the investment costs for the RoboticScope at the approximate level of conventional solutions while delivering significantly enhanced performance.

“This brand new innovative system is enjoying very high demand within only a few months of its market launch,” says BHS.