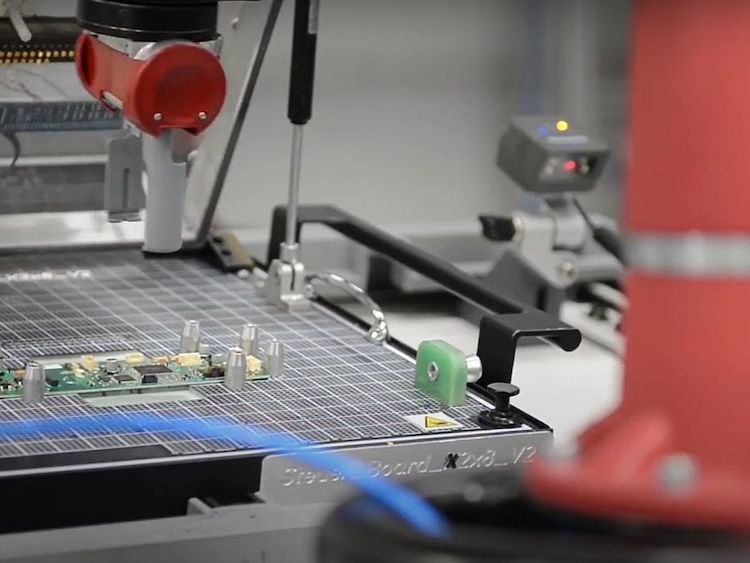 Rethink Robotics’ Sawyer robot has been carrying out the automated quality control of components at ASM Assembly Solutions.

Rethink, now part of the Hahn Group, says the ASM setup was simple and the operation enabled Sawyer to “quickly achieve high levels of acceptance among employees”.

The task of the SMT Solutions business segment in the ASM Pacific Technology group is to support, implement and realize the SMT Smart Factory for electronics manufacturers worldwide.

ASM solutions such as the SIPLACE Placement Systems and the DEK Printing Solutions support the networking, optimization and automation of central workflows at the line and factory level with hardware, software and services and allow electronics manufacturers the gradual transition to the Smart SMT Factory with dramatic improvements in key figures / KPIs for productivity, flexibility and quality.

The central strategy element at ASM is the close cooperation with customers and partners. ASM initiated the SMT Smart Network as a global competence network for the active exchange of experiences between Smart Champions.

ASM is a co-founder of the ADAMOS joint venture to develop an IIoT platform for manufacturing companies and, together with other SMT manufacturers, is establishing the open standard HERMES as SMEMA successor for M2M communication in SMT lines.

ASM uses Rethink Robotics’ cobot Sawyer in quality control. Sawyer independently performs the checks by picking up a part from the existing assembly, performing a scan of the surface and placing the board in a test adapter.

After this OK / NOK test, Sawyer separates the parts based on the results and releases them for further processing. Defective parts are removed from the process chain and deposited by Sawyer in a special area so that they can be transferred to the fault analysis.

Another challenge initially was the employees’ acceptance of the cobot. Manufacturing workers feared that Sawyer would be a machine that could endanger their jobs in the long term.

However, this idea changed quickly because Sawyer takes on repetitive tasks, which means that ASM employees can apply their skills for more demanding tasks in the value chain.

After a brief familiarization, the cobot has become part of the team in production, which gave him the new nickname “Paul”.

The ASM decision-makers got to know a Sawyer application, which offered an opportunity to automate the previously manually performed quality control of printed circuit boards. Sawyer was able to pick up parts independently and use them in a test system.

During the first meeting for the live demo of Rethink Robotics, the ASM decision-makers were impressed by how easy it is to program Sawyer through the Intera software.

Advantages for the customer

Alessandro Bonara, head of electronic manufacturing at ASM Assembly Systems, says: “It was very impressive for us that the Sawyer is so quick and easy to assemble.”

After delivery, assembly and connection, Sawyer is immediately ready for use. In comparison to conventional industrial robots, Sawyer is much easier to set up and put into operation.

Another bonus is that Sawyer does not have to be fixed to the floor of the assembly hall with screws, which makes its mobility another huge advantage in terms of flexibility.

Programming the Intera software is very easy for the user due to its structure and operation.

Employees can either build the program modularly using “Teach by Demonstration”, which works by moving the robot arm in the room, or using landmarks to specify a framework that Sawyer can use to learn how to perform his movements.

As a final step, an employee can fine-tune the programmed movements using the Intera software.

The safety aspect in the cooperation between humans and collaborative robots has the highest priority when using Sawyer.

That is why cobot Sawyer continuously controls his use of force, the position of his robot arm and has a collision control. The entire application used in production at ASM is CE certified.

The cooperation between Rethink Robotics and ASM was “very constructive and reliable”, say the companies.

For ASM, productivity and quality improvements are among the most important goals.

The use of technologies for automation is an important step, which is why the automated quality control with cobot Sawyer fits well into the ASM manufacturing process.