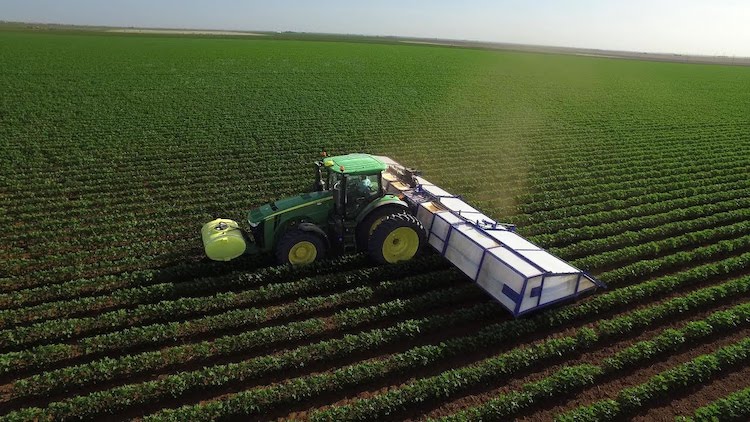 Robotics and artificial intelligence will drive a deep and transformative change in the agricultural world during the coming decades, according to a new report by IDTechEx.

Seeing, localising, and taking plant-specific intelligent action are no longer the exclusive realm of humans, says the research company.

Machines have demonstrated the technical viability and the emphasis has long shifted to the finer details of return on investment, reliability, business model, and so on.

The IDTechEx assessment is that the upcoming changes are already a question of when and not if. The transformation will not be overnight, but nonetheless, robotics and AI are an inevitability in the evolution of agricultural tools and practises.

The scale of the potential is demonstrated in the chart below, which shows the forecasted long-term growth in annual unit sales (vs accumulated fleet size) of various autonomous and/or robotic solutions.

In this article, IDTechEx Research provides an overview of the key product categories and discusses underlying technologies which are driving this change. For each, IDTechEx offers its insights about the current and future technical and adoption status.

IDTechEx Research has been examining the technologies, applications, products, and players active in agricultural robotics and AI for the past five years.

This article is based on the IDTechEx report Agricultural Robots, Drones, and AI: 2020-2040: Technologies, Markets, and Players, which covers the latest developments and reflects the company’s latest insights, analysis, and market projections.

It provides interview-based company profiles and analysis of all of the key companies and innovators.

Examples of these products or robots are shown below. These are often small or mid-sized robots which are designed to autonomously navigate and to automatically take some precise plant-specific action.

Machine vision technology is often a core competency of these robots, enabling the robots to see, identify, localise, and to take some intelligent site-specific action on individual plants.

The machine vision increasingly uses deep learning algorithms often trained on expert-annotated image datasets, allowing the technology to far exceed the performance of conventional algorithms and to match or even exceed even that of expert agronomists.

Crucially, this approach enables a long-term technology roadmap, which can be extended to recognize all types of crops and to analyse their associated conditions, for example, water-stress, disease, and so on.

Many versions of this emerging robotic class are autonomous. The autonomy challenge is much simpler than a car. The environment is well controlled and predictable, and the speed of travel is low.

The legislation is today a hinderance, including in places such as California, but will become more accommodative relatively soon.

The rise of autonomous robots, provided they require little remote supervision, can alter the economics of machine design, enabling the rise of smaller and slower machines. Indeed, this elimination of the driver overhead per vehicle is the basis of the swarm concept.

There is clearly a large productivity gap today between current large and high-power vehicles and those composed of fleets of slow small robots. This productivity gap however can narrow as the latter has substantial room for improvement.

Precision action (spraying, mechanical, or electrical) reduces consumption of agrochemicals by 90 per cent compared to untargeted application. It also improves yield (for example, by 5-10 per cent) because collateral damage of the crops by untargeted chemical application can be minimized.

This technology can further enable farmers to tackle herbicide-resistant weeds, which are a growing problem, especially in some hotspots. Finally, the robots leave behind no unusable compacted soil.

These robots are evolving. Many robots have already grown in size and capability, offering faster speeds, higher frame-per-seconds, more ruggedized designs, higher on-board energy for longer operation time and a heavier load, and so on.

This evolution will inevitably continue, just as it did with all other agricultural tools and vehicles. We are still at the beginning. The deployed fleet sizes worldwide are small, but this is about to change (see the chart above).

Intelligent robotic implements: The inevitable next generation of agricultural tools

The core technology here is also the machine vision, which enables the identification and the localization of specific plants. The algorithms already surpass the capabilities of agronomist in specific cases, e.g., weed amongst cotton.

Crucially, the systems are becoming ever more productive (see image below), closing the productivity gap with established technology.

This approach does not focus on autonomy, although the tractor itself can readily be made autonomous to render the entire system automatic if needed.

This system is designed to become competitive in large farms, which demand high productivity, which in turn is linked to technology parameters such as fps (frame per second), false positives, sprayer controller speed, and so on.

In the future, the system costs will likely fall, particularly if lighter versions of the algorithms on the inference side become available to render GPU processors unessential without a major performance sacrifice.

Autonomous tractors and high-power vehicles: Fewer but more autonomous systems will be the future?

Autonomous navigation is not new to tractors. Thanks to RTK-GPS, tractors have long been benefiting from tractor guidance and autosteer.

The latter is in fact Level-4 autonomy since the tractor can autonomously drive outdoors along pre-determined GPS coordinates without human intervention.

The cost of implementation, as well as the adoption of such technologies have increased. In short, the technical challenge does not hinder deployment.

Level-5 or fully autonomous tractors have also been demonstrated for some years. The technical barrier here is low. The required hardware is available and the autonomous driving software challenges are relatively mild given the nature of the operational environment.

As with all cases, the legislative environment is a hinderance today, but will not hold back the industry for long. The determining factors here are farmer perception and added value. In terms of the latter, the additional cost incurred in going from level-4 to level-5 does not justify the additional benefits, at least not yet.

This is because level-5 does not currently enable many new possibilities. This will remain the case until more tasks, and not just movement, become automated.

The rise of autonomous mobility is also giving rise to novel designs. In particular, the weight distribution can be altered without scarifying the horsepower, helping alleviate soil compaction issues.

In the longer term, though, other agricultural robots will eat into the tasks that tractors perform today, potentially denting overall demand.

Robotic fresh fruit picking: Is it technically and commercially viable?

Fresh fruit picking is still largely manual as deficient technical ability had so far held automation back. As such, farms are faced with high operating costs and are, more importantly, grappling with the growing challenge of assembling sufficiently large armies of seasonal pickers. Is this about to change?

The rise of deep learning-based image recognition technologies has caused a leap in performance, sending everybody back to the drawing board, including the older start-ups and some who had given up.

This technology improves algorithm precision, lowering the false positives which waste time. Crucially, a clear pathway exists for algorithm development for new fruit- environment combinations, enabling the applicability of machine detection and localization to be extended to many fruits.

The robotic path planning, picking strategy and the motion control of the robotic arm are also challenges. Here, too, there are algorithmic improvements.

Indeed, the first generation of companies have been demonstrating its technical viability over the past five years. But can it become commercial?

Humans today are still faster – for example, 2-3 seconds per picked strawberry vs 8-10 seconds for the robot.

This speed gap will almost certainly narrow in the future, lowering the comparative advantage of humans. In addition, robots can have many arms, compensating for the slowness of each arm – both articulated and delta arms are deployed.

The increasing availability of more affordable robotic arms which do not overshoot the power and precision requirements will continue to help. The machine vision can identify nearly all the visible fruits, but is yet to establish a method to find hidden fruits.

Therefore, a follow-on manual sweep is still needed to cover the final amount, for example, 20 per cent. The key to commercial success lies in the development of robust robotic and associated AI platforms which can be utilized across the harvesting season of different crops.

This approach is already reflected in the latest late-state prototypes or products on the market.

The total deployed number of units is small, thus the robotically harvested amount of fresh fruit is still vanishingly small compared to the addressable market. However, the technical viability is long proven.

The emphasis is now in bridging the productivity gap to offer a reliable solution with reasonable ROI compared with the incumbent human picking. Importantly, there is still ample room to boost productivity and to widen applicability by making constant incremental gains within established technologies.

As such, no breakthrough is required and progress is already rapid, making it more a question of timing and not of fundamental technical ability.

The second generation of products have already matured compared to the first, in terms of design, size, AI, speed, and so on. The iterations will continue.

Currently, the business models are split between RaaS and robot sales, just like the rest of this emerging industry.