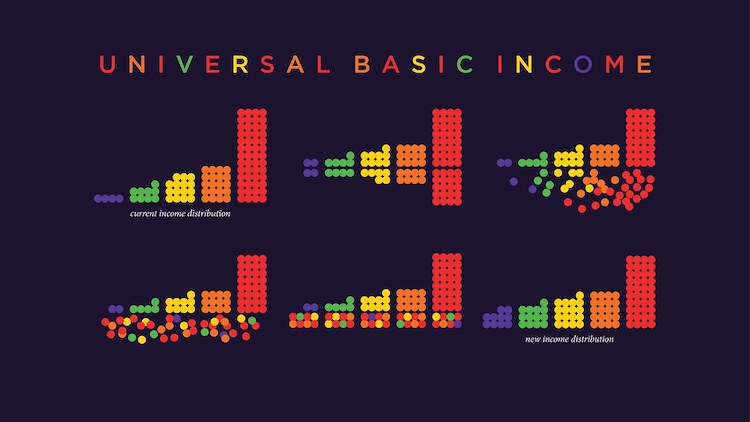 Although it was well worth reporting, we were somewhat flippant about UBI, suggesting it was a communist idea that would never take off. Finland, of course, was within the sphere of influence of the old Communist or Eastern Bloc, and the now-gone USSR.

However, it seems the UBI is now being given some sober consideration by a growing number of people, as reported in a variety of serious media.

According to the Guardian, the Finnish two-year pilot program was found to have “improved the wellbeing” of 2,000 randomly selected people across the country who were given €560 a month.

The recipients of the money were not required to give up their jobs or any governments benefits they might have been receiving.

And that is the criticism many people have of the UBI – it’s a regular amount of money, perhaps monthly, paid to everyone, regardless of need, and probably would make people lazy.

Nonetheless, the idea is being supported by politicians, to the extent that Spain has just announced a €3 billion UBI program, as reported by The Local.

Spain’s Prime Minister Pedro Sanchez said the program would “help four out of five people in severe poverty and benefit close to 850,000 households, half of which include children”.

The reason for the renewed, or in most cases entirely new, interest in UBI is the economic devastation caused by the coronavirus pandemic, or more specifically, the resulting lockdowns and social distancing rules that most countries introduced, which put the brakes on virtually every sector of every country’s economy.

Now, as the world looks to emerge from that lockdown, UBI is looking like a good idea to stimulate economic activity at the same time as helping people at the lower end of the socio-economic ladder.

Meanwhile, an organisation called the Basic Income Earth Network – unsurprisingly – has been highlighting various countries’ and regions’ support for UBI.

BIEN notes that earlier this month, the European Union agreed to register a Citizens’ Initiative for an EU-wide “Unconditional” Basic Income (UBI).

If the Citizens’ Initiative manages to collect 1 million signatures from at least seven different EU countries within a year of the start of the campaign the European Commission will be required to consider the initiative and respond.

This initiative was started by an international network of activists and initiatives called Unconditional Basic Income Europe (UBIE).

This network was first started in the aftermath of a campaign to garner support for a UBI citizens’ initiative back in 2013-2014 which managed to gather 300,000 signatures from over 25 EU countries.

The BIEN is also promoting the idea of an “emergency” basic income. Contributor Malcolm Torry writes that “social distancing, travel restrictions, and the closure of so many businesses, has led, and will continue to lead, to significant economic costs, both for families and for the economy as a whole”.

And he asks: “Given the clear advantages of Basic Income, why are governments not implementing temporary or permanent Basic Income schemes?”

No one knows for sure whether UBI would actually lead to economic recovery, or whether it would prove to be a slippery slope down to the kind of economic stagnation that the old “Eastern Bloc” countries, Russia included, suffered for decades.

Prof Helena Blomberg-Kroll, who led the Finnish study, suggested that the results were inconclusive, probably because the sample size was too small.

Blomberg-Kroll said: “Some said the basic income allowed them to go back to the life they had before they became unemployed, while others said it gave them the power to say no to low-paid insecure jobs, and thus increased their sense of autonomy.”

But she added that the idea should not be dismissed. “While basic income can’t solve all our health and societal problems, there is certainly a discussion to be had that it could be part of the solution in times of economic hardship.”

In the US, where almost 27 million new people have signed up for benefits sinch mid-March amid the coronavirus chaos, the idea of UBI is less widely discussed, as can be expected in a free-market economy where self-reliance is paramount.

The government has introduced aid programs which it may limit itself to, but one group of academics is pointing to the state of Alaska’s practice of paying each resident almost $2,000 a year simply for living in the state, implying that UBI is not really an alien communist plot to take over the world.

In an article the academics had published in The Regulatory Review, they note: “Public support for a national universal basic income has grown significantly in the last decade, and recent studies indicate that Americans are now split with roughly equivalent support for and against UBI.

“Indeed, some scholars argue that the damage caused by Covid-19 has revealed a fragile and inequitable economy and that the recent one-time payment should become a regular feature to give everyone basic financial security going forward.”

And while US President Donald Trump has been concentrating on encouraging businesses, especially in the manufacturing sector, to reopen and start production again, his political opponents have actually been addressing the idea of UBI.

As the Mail Online reports, House Speaker Nancy Pelosi is considering her Democratic colleague Andrew Yang’s campaign idea of giving $1,000 every month to every American over the age of 18.

The idea was laughed off at the time, and Yang was criticised for trying to buy votes.

However, speaking yesterday on MSNBC, Pelosi said that some people “have have suggested a minimum income, a guaranteed income for people. Is that worthy of attention now? Perhaps so”.

With no one really having any clear idea of how the economy in the US, nor anywhere else, will recover, all ideas are being considered, even ones which we may not have taken very seriously in the past.

Whereas the effects of automation were mostly gradual and could be predicted reasonably accurately and planned for adequately, the sudden impact of coronavirus has thrown most people’s plans into disarray.

As many people have said, we now live in unprecedented times.