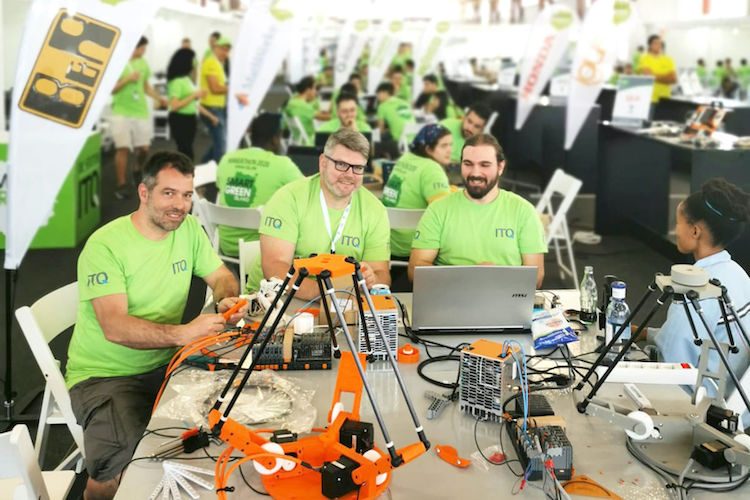 A group of students have built a robotic garbage-sorting system using B&R technology.

The 13 students were given three days to build a machine that uses robots to sort garbage at the international Smart Green Island Makeathon engineering competition.

This year’s Makeathon in Gran Canaria was entirely devoted to sustainability.

The team supported by B&R received their assignment at the beginning of the event and had to turn the concept into a functioning prototype in only three days time.

On the last day of the Makeathon, Professor Dirk Jakob, one of the supervisors of the team from the Kempten University of Applied Sciences, said: “It was quite a challenge, but we are proud that our team was able to develop the garbage sorting machine and get it running in such a short time.”

To help with the project implementation, students were provided with software and hardware from B&R as well as 3D printed robots that the Kempten University of Applied Sciences had developed themselves and brought to the event.

B&R says the open and flexible robotics solutions integrated in its system enable the operation of the homemade robots with a B&R controller. In the finished solution, three different types of robots sort garbage using a variety of sensors. OPC UA was used as the central communication protocol.

The Makeathon is designed to get young people excited about automation technology and at the same time to encourage them to think about sustainability.

Patrick Haberstroh, head of B&R’s Education Network, says: “I find the concept of the Makeathon extremely exciting and educational.

“You aren’t likely to find too many events like this where a comparable number of concepts and prototypes are created within a matter of a few days.

“This also allowed us to make initial contact with some talented young people who we may someday welcome as colleagues.”