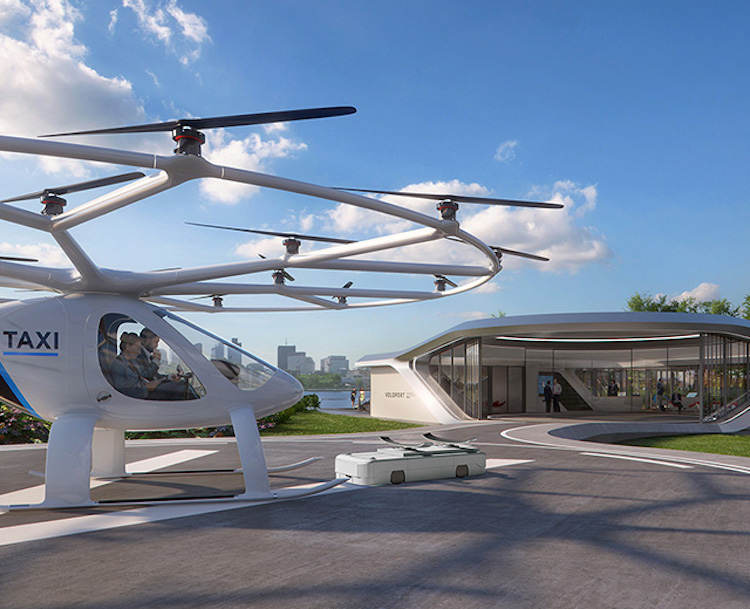 DB Schenker, a global logistics company, has invested in Volocopter, a startup developing a new type of passenger-carrying drone which can also be used for good distribution.

DB Schenker says its investment shows that it is “a pioneer of urban air mobility”. With the new investment, Volocopter has extended its Series C funding to now a total of €87 million.

The funding will go towards the certification of the VoloCity, hiring more industry experts, and a second generation VoloDrone to ensure commercialization of the heavy-lift cargo drone product.

To date, Volocopter has raised total funding of €122 million.

Volocopter is developing autonomous electrical Vertical Take-Off and Landing (eVTOL) aircraft. For example, the VoloCity, to offer air taxi services in the megacities of this world as an addition to existing transport options.

Just recently, the company performed a public flight over Marina Bay Reservoir in Singapore, demonstrating the maturity of its technology.

A full scale VoloPort prototype on display allowed visitors to experience what UAM could feel like in the future.

This bears testimony to Volocopter’s holistic approach to UAM as an ecosystem. Last October, Volocopter presented the demonstrator of its VoloDrone, marking the company’s expansion into the logistics, agriculture, public services and construction industries.

Jochen Thewes, CEO of DB Schenker, says: “We are convinced that the Volocopter technology has the potential to bring transport logistics to the next dimension for our customers.

“By integrating the VoloDrone into our supply chain of the future, we will be able to serve our clients’ demand for fast, remote, emission-neutral deliveries. We are thrilled to now be part of this drive for innovation in a fantastic team.”

“Bringing urban air mobility to life for passengers and goods is a great ambition and with our new partners, we bring the expertise and necessary long-term funds on board to make this innovative form of mobility a reality.”

With the round’s closing, the company has also newly appointed Yifan Li, Vice President of Geely Holding Group, and Jochen Thewes, CEO of DB Schenker, as new additions to its advisory board.

In a move towards further enhancing its corporate governance, Volocopter is bringing on two Independent Advisory Board Members with extensive industry expertise: former CEO of Daimler Dr Dieter Zetsche, as well as the founder of CAS Software, Martin Hubschneider.

Volocopter’s chairman, Stefan Klocke, says: “We very much welcome the new members to our Advisory Board, in particular Dieter Zetsche and Martin Hubschneider.

“The board will support the management in the further strategic development of the company towards the global market leader in urban air mobility and in the preparations for a potential future IPO.”

As the first eVTOL company to receive Design Organisation Approval by the European Aviation Safety Authority, the German air taxi service provider is already actively pursuing commercial certification and expects the first commercial routes to be opened within the next two to four years.