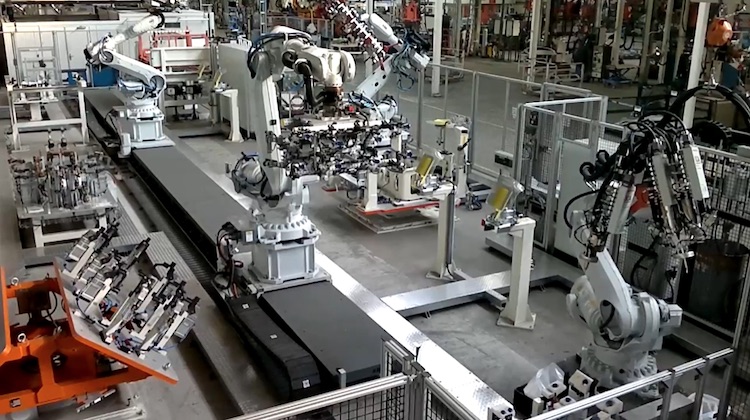 In a recent project for Mercedes-Benz (main picture), RobCo SWAT used RoboDK software to simulate ABB and Motoman robots working on a range of automotive manufacturing tasks including assembly and painting.

Theodor Georgiev, CEO of RobCo SWAT, says: “By combining Rhino and RoboDK we are able to offer high quality integration at an affordable cost.”

Specialists in the optimization of automotive production lines, RobCo SWAT provides the world’s leading car brands with a full range of robotic services from cell design, modeling and customized hardware to software and mechanics.

The power and versatility of RoboDK software helps to support one of the pillars of RobCo SWAT’s automation strategy – simulation and programming industrial robot arms.

“When someone has access to these instruments for testing and configuring their automated systems, they become significantly more effective and systems can be realized much faster.”

With the right software tools, you don’t have to be a world-class engineer to simulate and program industrial robots. For example, RoboDK software’s ingenious drag-and-drop design functionality and library of fifteen robot application scenarios from robot machining to polishing, means that even end-users with no programming knowledge can set-up simulations and generate robot programs within minutes.

RoboDK’s software library supports more than 500 robots from 50 manufacturers, including Fanuc, Yaskawa, Universal Robots and KUKA. This gives end users the ability to configure and test automated cells in a safe environment and within the same software ecosystem.

Automotive is the main driver and largest segment of the industrial robotics sector accounting for 30% of global robot installations, according to the latest figures from the International Federation of Robotics.

Car manufacturers use industrial robots for a huge range of tasks from welding, painting and surface coating to glue dispensing, assembly and inspection, all of which can be simulated within RoboDK software.

Despite concern about the future due to Covid-19, the automotive sector and automation deals haven’t stopped. In mid-April, automation giant Kuka and automotive giant BMW signed a framework agreement for the supply of an estimated 5,000 robots for new production lines and factories.

Covid-19 is grabbing headlines, but demographic factors operating on a much-longer timescale are driving automation adoption across the entire manufacturing sector.

In Germany, for example, it is estimated that by 2040, the labor market will be short approximately 10 million people, due to demographic changes.

No surprise then, that a recent survey revealed that 84 percent of German manufacturers believe that the widespread use of robot technology in medium-sized enterprises is not a question of “whether” but of “when”.

Founded by Albert Nubiola and Lauren Ierullo in January 2015, RoboDK is a spin-off company from the CoRo laboratory at ETS University in Montreal, Canada, one of the most prestigious robotics labs in North America.

RoboDK software is the extended commercial version of RoKiSim and is designed to bring powerful robotics simulation and programming capabilities to companies large and small and to coders and non-coders alike.