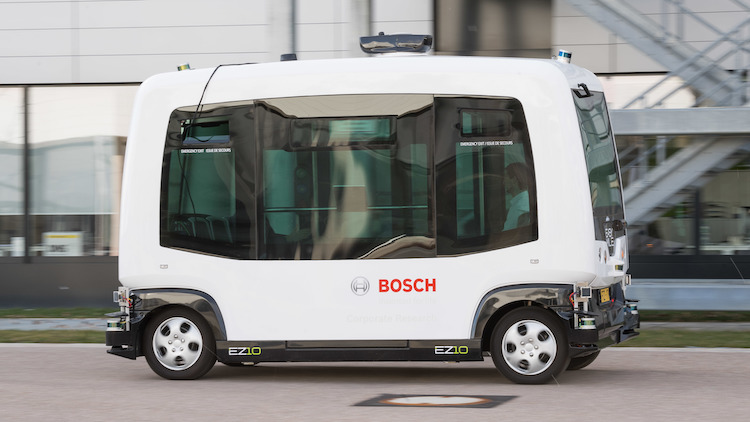 Project 3F, a consortium of six partners led by Bosch, has presented its results for automated driving in the low-speed range. (See video below.)

Their main finding is that the vehicle can continue driving despite deviations on the specified route and technical failures in the system.

The transport of people and goods were tested on test tracks in Renningen and Aachen, Germany.

Transporting visitors from the tram stop to the exhibition center, supplementing public transport, transporting containers with packages in the logistics center: all of these are possible areas of application for driverless shuttle vehicles.

The prerequisite is that they come safely from A to B – in two senses: safe and reliable. 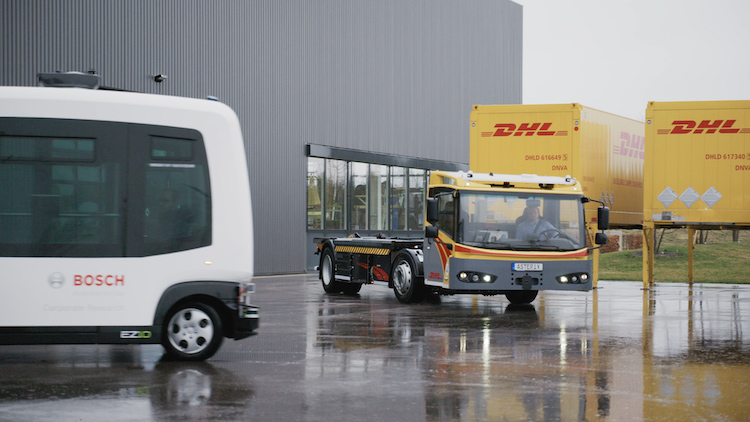 This is where the 3F project, “Driverless and fault-tolerant vehicles in the low-speed range”, started and focused on reliability.

Steffen Knoop, project manager in research and advance development at Bosch, says: “The aim was to develop solutions so that automated shuttle vehicles can travel safely, even if there is a technical malfunction or obstacles suddenly appear.”

Specifically, the issue was that in the event of an error, the system would not fail completely, but the vehicle could continue to drive.

In addition to Bosch as the consortium leader, three other companies, a university and a research institution were involved in the project, which was funded by the Federal Ministry of Economics with €4.3 million:

Shuttle vehicles can only be used without (safety) drivers if they monitor their system independently – that is, carry out diagnostic tasks – and can cope with identified technical faults and continue driving.

At the same time, in the event of critical errors, they have to bring the system into a safe state and stop it, for example.

The 3F project has worked on what the requirements look like in detail, how the systems must be designed on this basis and how the interaction of the individual components can be optimized.

One solution: redundancy, that is the existence of safety-relevant functions in duplicate.

For example, the researchers have developed redundant power supply systems so that the electric drive and vehicle electrical system are reliably protected and the sensors are matched and refined to the design of the vehicles.

In order to be able to reliably detect obstacles, several lidar and radar sensors were positioned at different vehicle locations.

This makes it possible to observe the surroundings from different positions, to achieve a 360-degree all-round view, to avoid blind spots and to create a 3D protective field.

Not only obstacles on the road like barriers are recognized in this way, but also hanging branches.

Another solution: fault tolerance, that is the partial compensation of a subsystem failure by other functions.

It works in a similar way to people: if the light suddenly goes out in a closed room, they feel slowly instead of becoming rigid.

The shuttle vehicle behaves in a similar way: if it is blind in one area because sheets stick in front of the sensor or a large object such as a dumpster completely blocks the view in one direction, it slows down its journey or saves the areas on the route that are no longer recognizable out.

The project has also worked to ensure that shuttle buses also react to deviations in the area within their defined route.

The vehicles should slow down when moving objects approach or when in doubt generously drive around unknown objects.

With recurring markers such as lanterns, they continue to travel at an undiminished speed. If danger is imminent, the shuttle will order a stop for safety reasons.

The goal: The vehicle adapts its driving behavior in real time to the circumstances, but continues to drive automatically if possible, even in the event of system faults or despite obstacles on the route.

Telemetry to three, application to two

Data about the current journey and the technical condition can be transferred out of the vehicle and back to the vehicle. Information goes back and forth with three functions: diagnosis, monitoring, control.

Telemetry, that is the transmission of measured values, to the power of three, so to speak, and therefore: “teletrimetry”.

Based on this, an entire fleet of automated shuttle buses can be controlled remotely from a control center, repaired or controlled if necessary, for example to open doors.

This is how the vehicles can be supported in the event that they reach their limits in terms of error detection and error compensation or if they need maintenance as scheduled.

The solutions developed in the project can not only be used in driverless shuttle buses, but also enable the robust support of logistics processes.

An assistance system in the interaction between driver and vehicle was developed, which enables highly precise positioning of swap body pallet trucks – special vehicles for moving containers in logistics centers.

The aim was to move the vehicles to the centimeter under container gantry cranes so that the transport containers could be picked up quickly.

This requires precise localization and a kind of automated parking under the bridge.

In practice, this automated maneuver enables the containers to be picked up and positioned correctly.

The developments were tested on several test tracks: two shuttle buses on the Bosch research campus in Renningen were used to test the transport of people on an area that is also used by pedestrians.

At an innovation park near Aachen and in the vicinity of a parcel center of Deutsche Post / DHL, the interaction between driver and automated vehicle was examined using a logistics vehicle.