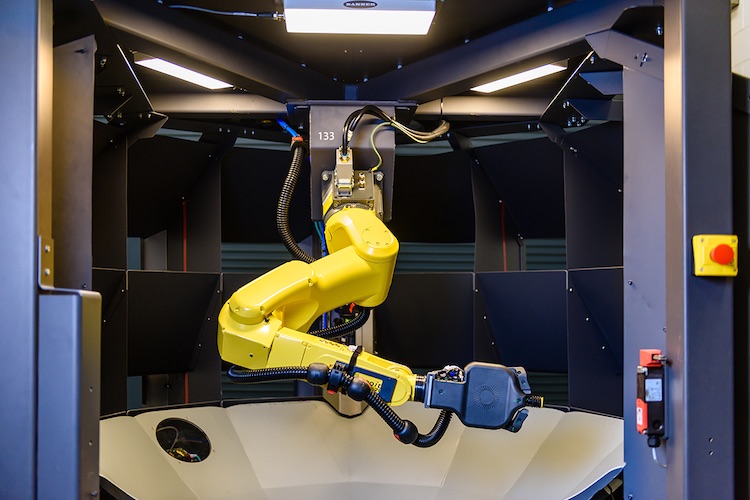 Kindred has unveiled a new robotic solution for e-commerce fulfillment.

The company debuted the Kindred Sort 3.7 piece-picking robot at the recent Modex Show.

The enhanced Sort 3.7 system features eight additional cubbies, for a total of 27, translating into a 42 percent increase in the number of items it can sort at e-commerce fulfillment centers and warehouses, says Kindred.

James Bergstra, co-founder and head of AI research at Kindred, presented the new system at Modex.

He explained how Kindred utilizes reinforcement learning and closed-loop task control to command piece-picking robots to continuously make them “smarter, faster and more accurate over time”.

Bergstra says: “Just like Kindred’s AI and reinforcement algorithms are continually improving, the robotic engineering and features in the Sort are too.

“Together, these upgrades translate into increased throughput, speed and accuracy that drive e-tailers to meet their peak volume goals each day.”

Kindred says the updated Sort 3.7 is “highly optimized” to integrate with continuous induction systems, such as cross belt or bombay sorters, as it can now “pick 400 units per hour consistently”.

Kindred says that, when Sort is paired with a primary sortation system, fulfillment centers can double the number of items one employee oversees and ships out.

Collaborating with Sort, associates on average can ship up to 850 units per hour, adds Kindred.

Kindred also revelead at Modex that the company is working with large fashion clothes retail chain Gap on e-commerce fulfillment.

The company says its Sort system has “human-like capabilities” which enables it to separate multi-SKU batches into individual customer orders.

Kevin Kuntz, SVP of global fulfillment logistics at Gap, says: “At Gap, we are always looking for cutting-edge technology that can further elevate our supply chain.

“As our e-commerce business continues to grow, Kindred’s smart robots provide the flexible automation solution we need to quickly process our online orders.”