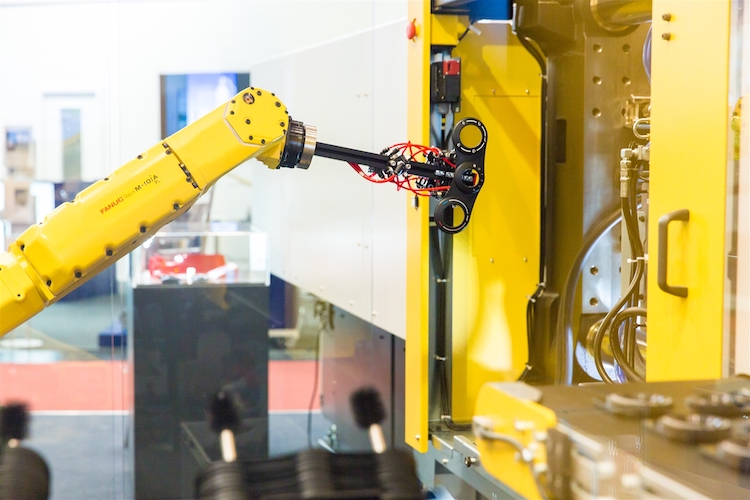 A collaboration between Fanuc and SICK has pioneered new safety integration for robot machine tending that points the way towards simpler, more cost-effective and adaptable solutions in future.

For this reason, the manual operation of machine tending – ubiquitous throughout manufacturing industry – has become a prime candidate for robotic automation.

Machine tending, typically to load and unload, for example, CNC milling and turning centres, presses or moulding machines, is a common application that is becoming increasingly difficult for manufacturers to staff economically.

Using robots instead offers far-reaching opportunities to develop Industry 4.0, 24/7, batch-driven processes that are more flexible and adaptable in future.

Currently, much of the discussion around machine tending is around the new smaller-scale collaborative or co-operative robot types.

However, its more likely that industrial robots with their robust, heavyweight performance will remain the star automators in machine tending, especially as they have added potential to link process stages together and combine with other operations, such as vision quality inspection, to drive production to the next level.

But as these opportunities develop, so does the need for robot, machine and other devices like operator controls, door interlocks or laser scanners, to talk to each other seamlessly.

At the same time the consequent system must fully integrate with safety circuits to meet required industrial standards. That’s simple enough to say, but in practice, it can be difficult to achieve.

Fanuc is known throughout the world as a global specialist in both CNC controls and robots, so is better placed than most to pass on the advantages of these synergies to its customers.

Perhaps a little less well known is the company’s international leadership in servo-driven injection moulding machines, which are widely used by producers of smaller scale plastic products, for example in the contact lens and medical industries.

This is the story of a development collaboration between SICK and Fanuc that has charted a route to upgrade robot machine tending for injection moulding machines.

The challenge presented itself when Fanuc looked to develop a side tending robot solution for its RoboShot precision electric injection moulding machine. Surprisingly, perhaps, from SICK’s perspective this story is not really about sensors.

Instead, SICK has applied its Flexi-Soft safety controller and Efi-Pro module for CIP Safety over EtherNet/IP to chart the way to more streamlined robot integration.

Conventionally, an injection moulding machine fires finished parts into a bin for periodic collection by an operator. But increasingly, customers want to exploit the potential of robots to tend the machines and improve their production efficiency.

James Pointer, Fanuc project engineer, says: “Typically, on our RoboShot machines an articulated robot sits on top of the machine from where it can reach down into the cell to remove the moulded parts and place them, for example, on a conveyor for the next stage of the process.

“However, some customers want the added flexibility of a robot that tends the machine from the side. As a result, there is a need to protect the safety of operators while the door of the machine cell is opened to allow the robot access.

“The standards provide a universal solution to interfacing robots and other devices to machinery for the industry, but at the moment those connections must be hardwired.

“The EuroMap 67 standard is available via a single 50 core cable connector, while the EuroMap 73 standard that governs the safety integration, including the need for three separate safety contact switches, is via a 25-core connector.

“Of course, it is possible to hardwire connections between the machine, the robot, and to the robot controller which can often be located some distance from the machine.

“However, this is complex for our integrators and end-users to achieve, as well as being extremely costly in terms of the cabling required. To solve the problem you need a safety controller, so we approached SICK to see if they could help.” 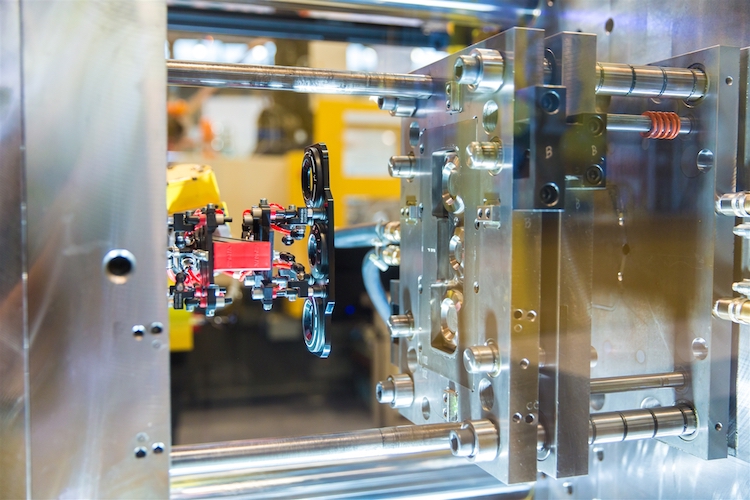 The resulting development achieved a simple I/O “handshake” between the robot and the machine by using SICK’s Flexi-Soft safety controller with the addition of the SICK Safe Efi-Pro gateway solution for standard industrial EtherNet-based safety network integration over CIP Safety.

The solution was groundbreaking in bridging a gap in connectivity, as well as providing a proven, extremely simple system that provides future-proof security as both standards and connected devices align with CIP Safety over EtherNet/IP in future.

“We were able to mount a standard junction box on the RoboShot machine for the SICK Flexi-Soft controller, so that the multi-core connections stay local to the machine.

“Then, all that was needed for the long run between the robot and the controller was the EtherNet line, together with a two core 24 V cable.

“A key part of the solution was to use a mix of safety and standard (non-safety rated), input/output cards available in the SICK range, so we could wire everything back to one place in the junction box, with safety and normal I/O communications down the same EtherNet cable.

As a result of the development work between SICK and Fanuc, an elegant and very simple solution has been achieved with a safe robot ‘handshake’ over EtherNet/IP.

The solution immediately presents a number of additional benefits to Fanuc’s customers, both end-users as well as system integrators.

There are significantly less cabling costs, with much more simple programming and set-up. The solution is relatively simple to retrofit, so customers can introduce robot tending to existing machines and dispense with manual processes.

By integrating via the SICK Flexi-Soft controller over Efi-Pro, further robot controllers can be easily connected then programmed to work together safely.

A safety logic can be established that avoids unnecessary stops that might otherwise compromise production efficiency.

Now, customers have an opportunity to connect production processes together. One robot could, for example, place down a moulded part for it to be picked by the next process.

By communicating over CIP Safety, diagnostic information can be retrieved from connected devices via an HMI.

So, for example, if there are SICK safety laser scanners integrated into the system, they can deliver alerts when screens need cleaning, as well as enabling operators to interrogate a history of when warning fields have been interrupted.

In future it is conceivable that the EuroMap 73 standard will be upgraded to allow communication via CIP Safety, thus negating the need for hard wired connections.

At this point, machines using the SICK/Fanuc solution will already be future-proofed and ready for the development.

“By collaborating with SICK, we have provided a solution for our customers that avoids the need to add significant extra hardware to a machine, or extra cabling, while taking out a great deal of time and complexity for our integrators,“ says Pointer.

While Fanuc can apply the solution to new RoboShot machines for customers, its integrator partners have the basis for a ready-made package with all the building blocks necessary, including for example the safety controller, guarding and interlock devices and push button controls.

The injection moulding standards and robot controls may be specific to this application, but this case study demonstrates how, whatever the industry, companies like SICK and Fanuc will increasingly work together to bridge the gap and allow machines, robots and other devices to work seamlessly together in an open standard environment over EtherNet/IP.