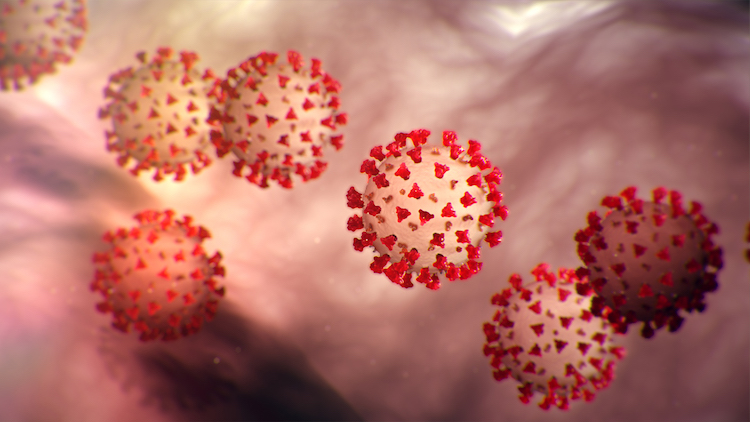 If anyone thought they could make coronavirus go away by simply ignoring it – we include ourselves in this – has been proven wrong. Wherever you are in the world, it has been virtually impossible to ignore what is now called Covid-19 by the World Health Organisation, which has declared the virus a pandemic.

A pandemic is a virus or disease that appears on every continent, as coronavirus indeed does.

Some may have argued that Covid-19 is simply a variation of the flu. Even if that’s true, it is far more dangerous than the common or seasonal flu. Coronavirus kills, and has done so on an unprecedented scale.

When China totally locked down Wuhan, a city with a population of more than 11 million, many in the international community may have thought the government was over-reacting. And the bringing in robots to help fight the coronavirus outbreak may have been seen as unnecessarily alarmist.

Now, with virtually every government in Europe and the Americas ordering citizens to stay home, work from home, avoid all social contact, avoid travel, banning sports events, entertainment events and public gatherings of all kinds – in other words, total lockdown, no one is talking about over-reaction anymore.

Pictures of empty streets across Europe have conveyed the image an apocalyptic scene, with eerily quiet cities that once hustled and bustled with continuous activity.

At the time of writing, the virus has so far caused the deaths of more than 14,000 worldwide. Italy has suffered the largest number of deaths from coronavirus, at almost 5,500. China, with approximately 3,200 deaths.

These figures are from a website called Worldometers, which says there have been almost 190,000 cases of Covid-19 in total worldwide. Other news organisations put the total number of deaths at a much higher number. Data modelling in the UK, published on the Telegraph website, suggests that the country will see more than 20,000 deaths from coronavirus within the next few months.

The spread of the virus has been logarithmic, which is even faster than exponential, which means doubling every so often; logarithmic means coronavirus expansion has more than doubled in a very short space of time.

In terms of numbers, the total number of cases increased from below 1,000 on January 22nd to around 100,000 by late February. And while 200,000 is a huge number, some analysts say that it appears that the spread of the virus is slowing.

But slowing the coronavirus outbreak has taken the shutting down of large parts of the economy and society.

In China, where the coronavirus outbreak began, the economy has taken a massive hit. According to reports, the automotive industry has see a slowdown of approximately 90 per cent. In other words, it’s been all but destroyed.

How it will recover from this is anyone’s guess at the moment.

So many parts of China’s economy have been devastated by coronavirus that some analysts say that this could be the end of China’s decades-long economic growth trend.

The New York Times quotes Zhu Chaoping, a global markets strategist in the Shanghai office of JPMorgan, who says: “Most of us are expecting a negative percentage, 2 or 3 percent below zero, or maybe lower.”

However, on the plus side, according to Mao Shengyong, the director general of the department of comprehensive statistics at the National Bureau of Statistics, which released the data, “The impact of the epidemic is short-term, external and controllable.”

Nonetheless, for now, China’s industrial output is contracting at the fastest pace on record, which is not surprising, since the coronavirus outbreak is the worst health crisis the world has ever seen.

Figures released by the National Bureau of Statistics show that industrial output fell by 13.5 per cent in the first two months of 2020. And all sectors are affected.

China’s transition to a consumer economy has stalled, with retail sales down more than 20 per cent for January and February. Investment in fixed assets fell by more than 24 per cent. Services sector output is down 13 per cent for the same months.

All of which means that the gross domestic product of China has contracted by 13 per cent, something which means the government is having to revise its economic forecasts.

But, according to the Financial Times, the initial economic shock from coronavirus was felt in the supply chain.

These days, supply chains are global, involving raw materials, components and parts often travelling thousands of miles around the planet before ending up in China to be manufactured into finished products and then shipped across the country or beyond its borders.

The coronavirus outbreak may have a lasting effect on this, with companies shortening their supply chain as much as possible so they are not as vulnerable to breakdowns in different parts of the world.

Supply chains include warehouses, robots, logistics routes, ships, planes, trains, trucks, and of course people. All of these have been affected.

One of the less badly affected facilities are warehouses – the ones which are almost entirely automated with robots.

But even with highly automated facilities in among the total mix, the overall effect coronavirus has had on the global supply chain has been debilitating.

According to Supply & Demand Chain Executive, coronavirus impacted every sector of the supply chain even before it was declared a pandemic.

The US is being hit particularly hard, even though it caught the bug later than China and Europe. The US imports a huge amount of products from China, as has been widely documented for many years.

For example, 80 per cent of pharmaceutical products sold in the US are produced in China. Moreover, China is often the main or only supplier of the active ingredients for many vital medicines used in America, according to the Cambridge Network.

In the clothing sector, and other types of retail, needless to say, China also plays a big part. Data released by Coresight Research and published by CNBC illustrates and emphasises this fact. 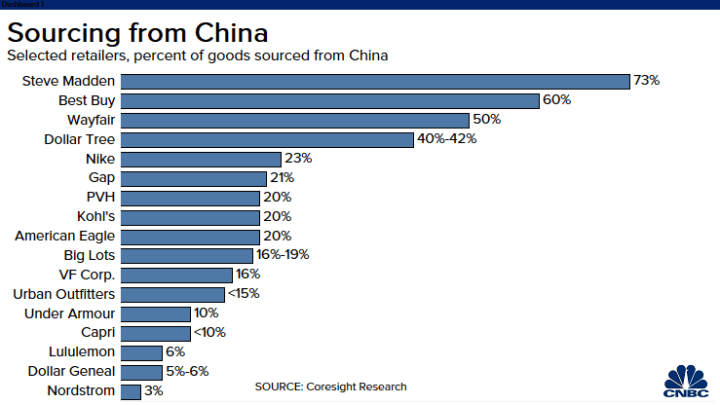 As can be seen from the graph, three major retailers – Steve Madden, Best Buy and Wayfair – source 50 per cent or more of their goods from China. The next six retailers source approximately 20-40 per cent.

With such reliance on supplies from China, it is difficult to estimate exactly how much damage coronavirus will cause to the retail sector in the US.

Data collated by Zencargo suggests that retailers could lose as much as $700 as a result of coronavirus’ effects on the supply chain in China.

Wuhan, where coronavirus was first detected on December 31st, 2019, is a major hub of manufacturing logistics activity. It is the most populous city in central China, and when the government ordered a lockdown of the 60 million population of Hubei province, of which Wuhan is the capital city, it effectively cut off a large part of its own economy.

Since then, more lockdowns across China have basically caused the global economy to grind to a near-halt.

It’s difficult to overstate the devastation coronavirus has caused to the Chinese economy. By most accounts, the government has done what it can to reduce the impact with quick and extensive lockdowns as well as the building of hospitals and extensive testing.

The widespread use of face masks and gloves has also helped slow the spread of the virus, but the damage is already done. While coronavirus may yet cause more havoc in the coming months, whether the country and its economy will ever be the same again is open to question.

Certainly, in Europe and the US, some observers are saying that the government-directed lockdowns, arm-controlled streets, limiting or complete elimination of social contact and travel may all lead to a permanent shift to telecommuting, or working from home.

Some jobs absolutely require people to travel to work, but a very large proportion of jobs in advanced economies are computer-based, so it’s quite possible that all of them could be done from home.

To encourage working from home, governments are considering investing more money into boosting the telecommunications infrastructure of their countries, making faster internet connections available more widely, even in rural areas that currently have little or no internet service.

But ultimately, even if all the jobs that could be done from home do eventually get done from home, food and many other products will need to be delivered to people, wherever they are, and that means the supply chains must be repaired or modified to be able to keep the economy and society functioning normally.

The drastic measures taken by China’s government in the early days of the outbreak has limited the spread coronavirus, and many observers are saying that, provided other countries in Asia and beyond are able to contain the virus as effectively, the disruption to the supply chain and industry in general “should not be hugely disruptive to China in terms of supply chains”, according to Louis Kuijs, head of Asia economics from Oxford Economics, as quoted in the South China Morning Post.

And as reported in China Daily, the country’s president, Xi Jinping said the government is resolved to “keep the international supply chain unblocked, facilitate investment and exhibition services, and ensure that various economic and trade activities proceed normally”.