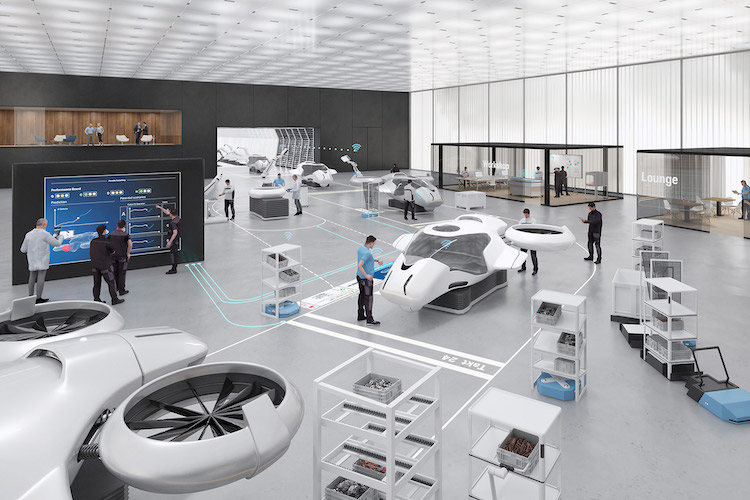 The world’s leading trade fair for intelligent automation and robotics, automatica, will take place in Munich from June 16 to 19.

One main focus of the event will be on making automobile production more flexible.

The automobile industry is undergoing substantial changes. The discussion about drive technology of the future is in full swing. Some manufacturers are betting on electromobility, while others are more likely to use it as a transition technology.

At the same time, combustion vehicles seem more durable at least at the moment than previously assumed.

In addition, new generations of diesel engines with highly effective filter technology have significantly lower emissions than their predecessors. Other future drive alternatives are synthetic fuels, hydrogen and fuel cells.

How does this scenario affect highly automated automotive production? What does this mean for robotics and automation technology providers? In other words, what does automobile production of the future look like?

The diversity of drive technologies and the resulting uncertainty make it difficult for car manufacturers to answer these questions.

But one thing is certain: without highly flexible, digitally networked automation solutions, the challenges of the future cannot be mastered.

Sustainable, Industry 4.0-compatible solutions are in demand that support vehicle manufacturers, Tier 1 suppliers and system suppliers around the world in the implementation of state-of-the-art manufacturing structures.

automatica, the leading trade fair for automation technology, shows technologies suitable for this purpose. Many of these solutions have the elimination of stationary conveyor technology in common.

This means a real paradigm shift, because the assembly line has dominated automotive manufacturing for more than a hundred years.

Today, car manufacturers and factory planners are looking for alternatives to this highly efficient but also inflexible technology.

The first steps were already taken years ago in bodyshell construction. The robots used there not only weld, rivet and bond, but they also hold and transport the bodyshells while their machine “colleagues” process them.

One of the positive side effects: When changing models, you do not have to scrap the entire production lines, but only reprogram the robots.

New era not only in automotive production

This principle can now also be applied to final assembly. Porsche is demonstrating this with its new Taycan production facility in Zuffenhausen.

According to Albrecht Reimold, head of production at the company, the assembly line has been virtually abolished there. Instead, the vehicles move through production on driverless transport systems, also called autonomous guided vehicles (AGVs), and consequently are completed step by step.

This increases flexibility considerably. The speed of the AGVs is just as variable as the time they spend at the assembly stations; in theory, the vehicles do not all have to take the same route through production. In addition, several models or derivatives can be produced without problems on one and the same line.

The complete spectrum of flexible automation

This shows that flexibility is the trump card – and this is not only true for automotive production.

Markus Uellendahl, senior partner of management consulting at Porsche Consulting, says: “We will also see a departure from traditional automated production lines in other industrial sectors.

“In the Smart Factory of the near future, flexible transport systems such as AGVs will make it easier to adapt production and logistics processes.

“In the most consistent form of implementation, the products that are manufactured automatically control the assembly stations that are currently available on autonomous transport systems. Algorithms and artificial intelligence support planning and make decision-making more efficient.”

According to Uellendahl, the increased convertibility of the smart factory further reduces subsequent investments.

Companies that strategically pursue this goal can actively leverage changes in products and processes to gain a competitive advantage as well as adapt faster to changing market requirements and general conditions.

At automatica, numerous providers will show how smart, digitally networked production can be implemented.

The trade fair provides a unique opportunity to examine all these product groups in a targeted manner.

In addition, a further development can be seen at automatica: Modern automation concepts do not do without workers, but instead place them on center stage.

Exoskeletons and cobots will physically relieve burdens of employees. The biggest development leap is to be expected in the area of cobots. Established robot manufacturers already presented groundbreaking solutions at automatica 2018 and lots more further developments will be shown in 2020.

For example, the Japanese robot manufacturer Fanuc will present a completely newly developed cobot in Munich.

Future-oriented HRC solutions can also be expected from Universal Robots, Kuka, Yaskawa, ABB, Stäubli and many other exhibitors.

Collaborative robots have long since become customary in actual practice, such as at Opel in Eisenach: A cobot from the Danish manufacturer Universal Robots screws air-conditioning compressors to engine blocks there.

Immediately next to the employees, without a separating safety fence, the robot tightens three screws every two minutes to exactly 22 Newton meters while its human colleagues continue to carry out the less stressful upstream and downstream work.

Another example: Together with BMW in Dingolfing, Kuka has created robot solution facilitating work for employees who lift bevel gears weighing up to 5.5 kg and fit them into front axle transmissions with millimeter accuracy.

They used to do this manually, but today the sensitive robot colleague LBR iiwa assists them. It is suspended on a slender steel construction and manages without external sensors, because a joint torque sensor system is active in its seven axes.

Christoph Hock, head of human-robot collaboration at Kuka Systems, says: “We will see significantly more such applications in the automotive industry in the future.

“In times of increasing number of variants, it is a clear competitive advantage to be able to adapt production optimally to required capacity utilization, for example with the help of flexible HRC units.”

automatica will provide a thorough overview in June of how the new flexibility can be implemented in a practical way – not only in automotive production.

Main picture: The principle of flexible automobile production without an assembly line can also be applied to other industrial sectors. Picture: Porsche Consulting