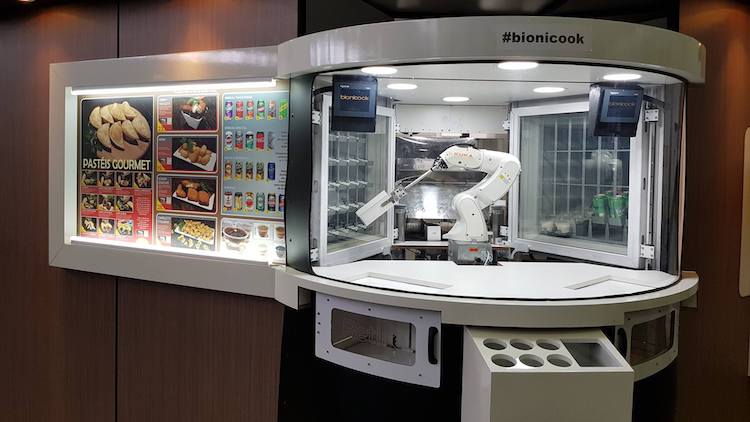 Kuka has unveiled what it describes as “the first fast food robot in the world”, adding the word “probably”.

First pioneered by Carlsberg, which used to call its beverage “probably the best lager in the world”, it’s the sort of waffle much favoured by journalists.

Kuka has “probably” noticed that there have been stories about robots being used in fast food operations as well as bars, so it “probably” decided that it’s best not to be too emphatic about its sort of half-claim to be the first.

Kuka describes the new robot as “small, agile and precise”, adding that it “will soon be exciting fast food enthusiasts around the globe”.

The robot in question is Kuka’s KR 3 Agilus, which won over the Brazilian company Bionicook, and is now serving the company’s snacks, beverages and desserts to guests in “the world’s first fully automated fast food machine of its kind”. 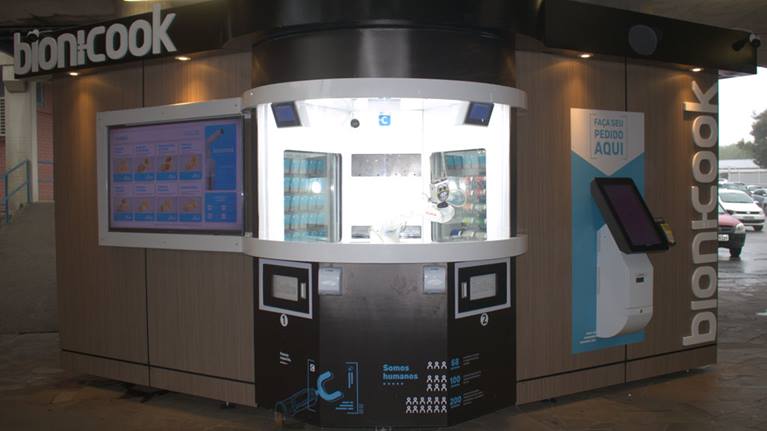 The phrase “of its kind” can also cover a multitude of claims, as journalists well know.

Joking aside, fast food companies often survive on very slim profit margins and many have been looking for a robotic solution that will help become more efficient.

A Kuka robot at work in the restaurant business

Industrial companies have long been relying on automation solutions with robots.

However, other sectors can leverage the advantages of using machines as well. Robots for fast food restaurants? Robots in the restaurant business?

In his goal of optimizing the food industry, or more precisely the fast food segment, entrepreneur Fabio Rezler from Caxias do Sul, Brazil answered these questions in the affirmative.

Food on demand – thanks to the fast food robot

The concept was presented at the Mind7 Startup trade fair in Caxias do Sul in May 2019.

With the fast food machine, customers can choose between 14 snacks, two desserts, three salads and 15 beverages. Guests place their order via a touch panel.

Once they have paid, the serving robot starts preparing the order.

It autonomously handles and serves the items. To do so, it fetches the food, cooks it if necessary and serves it.

The food is deep-frozen and pre-portioned. The robot serves the order within three minutes, and fills up to 100 orders per hour.

What the serving robot offers

It requires little space, yet is extremely agile: The properties of the Kuka KR 3 Agilus are convincing numerous industries. It has a payload capacity of 3 kilograms and a reach of 540 millimeters.

It makes it possible to achieve shorter cycle times and to increase output.

Kuka says this is “an ideal basis for the fully automated fast food counter”, adding that the robot delivers meals in a minimum of time – around the clock, seven days a week.