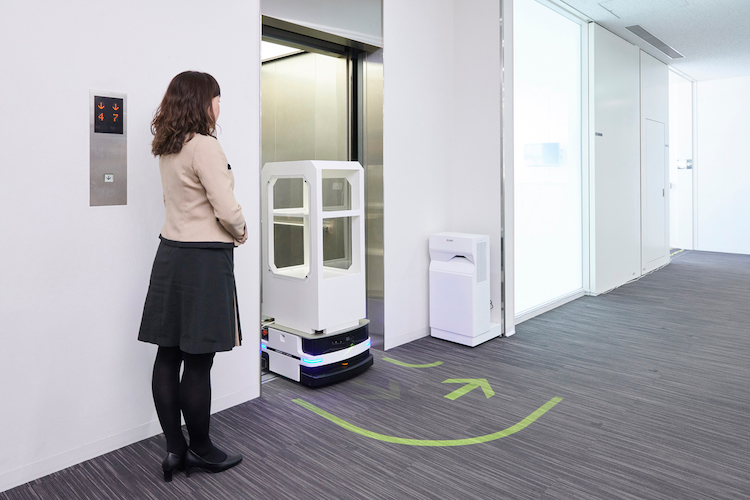 Mitsubishi Electric says it has developed a technology for controlling “in-building” mobile robots used for cleaning, security, delivery and guidance, as well as next-generation electric wheelchairs.

The company says the software uses building dynamic maps to achieve cooperative interaction between the mobile machines and building facilities, such as elevators and access control systems.

Mitsubishi says that by supporting the safe, efficient movement of people and in-building mobilities in buildings, the new technology is expected to reduce the workloads of building-management personnel and help realize smart buildings in which people and robots coexist safely.

Mitsubishi says it will continue developing the technology in collaboration with developers and mobility manufacturers, aiming to introduce a commercial service after March 2021.

There are two key features of Mitsubishi’s system. 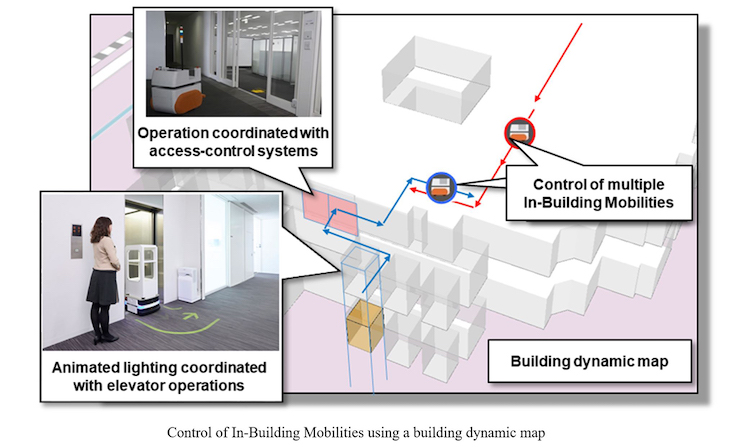 1) Mobile machines can move efficiently by building a dynamic map

Mitsubishi Electric’s newly developed building dynamic map is utilized to control the movements of multiple mobile robots within a building.

When the mobile machines use elevators or pass by each other in narrow aisles, the system automatically guides them along the best routes to avoid hitting other mobile machines, entering prohibited areas or boarding crowded elevators.

When passing through an access-control gate, the system uses the map to prioritize the movements of people as well as to prevent collisions.

In addition, elevators and access-control systems are linked to coordinate the efficient and safe movement of mobile machines among people throughout the building, including when moving between floors.

The system also identifies the locations of mobile machines, including when they break down, by recording the operations of elevators as well as the mobile machines to visualize each unit’s location on the building dynamic map, to further reduce building management workloads.

Animated lighting is displayed on the floors in front of elevators to help people anticipate the movements of mobile machines that are getting on and off the elevators, allowing people to smoothly and safely enter and exit elevators together with the In-Building Mobility.

Animated lighting is also displayed as mobile machines – which Mitsubishi calls “In-Building Mobilities” – move in other areas, allowing people to pass safely even in narrow passageways or in poor visibility.