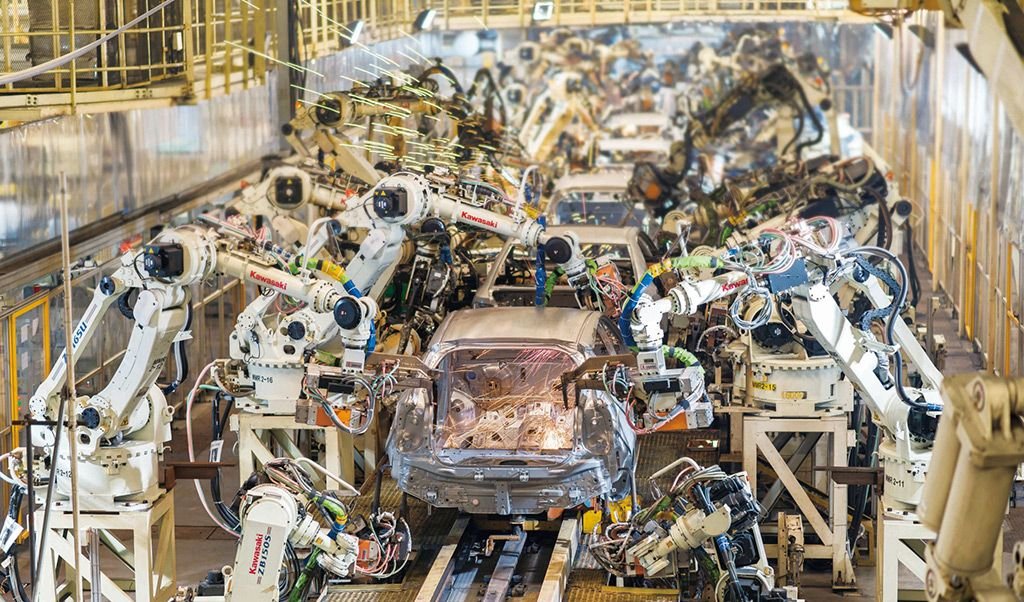 Groundbreaking technological evolutions in recent years have provided a significant boost to the robotics domain, particularly pertaining to human-robot interactions.

Robotic technologies have evolved significantly over the years and are poised to transform the industrial landscape across the globe.

As a matter of fact, reports from the International Federation of Robotics suggest that over 3 million industrial robots will be used in factories by 2020.

The automotive industry is no stranger to industrial robotics. Automotive robotics have maintained a robust presence in the auto manufacture sector for over 50 years, with established automakers integrating robotics into their assembly line for a vast array of production activities.

This presence is a result of various developments and refinements over the years, dating way back to the Second World War.

The WW2 period witnessed immense strides in the technological field, as US auto manufacturers faced high quotas, necessitating an improvement in output.

The quest to bridge the supply-demand gap expedited technological progress considerably and gave rise to innovations like the first computer. The age of automation took hold in 1970, following the advent of the first integrated circuit.

Earlier versions of industrial robots did not feature external sensors but were nonetheless able to perform simple tasks such as pick up and place. These features made automotive manufacturing processes relatively safer for workers.

The origins of modern automotive robotics industry, however, go back to the launch of prototype industrial robotics used by General Motors in 1961.

These robotics were used predominantly for spot welding purposes and soon attracted the attention of other automakers, Ford being among the most prominent.

The late 60s and 70s prompted a surge in advancements in the automotive robotics market. Industry growth was characterized by the emergence of prolific technologies like the Stanford Arm in 1969, built to handle tasks previous versions could not, as well as the launch of MIT’s Silver Arm in 1974, which featured a microprocessor and pressure sensitive sensors.

These developments, and many more over the years, paved the way for the advanced automotive robotics as they are known today.

In the current scenario, robots are considered an integral part of the automotive manufacturing process.

Industrial robotics used for automotive applications are experiencing a massive upsurge in recent times owing to the proliferation of automotive plants in eminent nations like China, and growing demand for automotive robotics from automakers in North America.

Modern robotics are highly advanced as compared to their older counterparts. With semi-autonomous features, machine visions systems and the ability to work in tandem with humans, these systems are able to interact with and adapt easily to a rapidly changing environment.

One of the most advanced form of robotics emulating these characteristics is collaborative robots.

Collaborative robots, known commonly as cobots are developing at a rapid pace. Once met with significant skepticism, cobots have evolved and emerged as one of the fastest growing segments in the overall industrial robotics domain.

Collaborative robots are also making efforts to break stereotypes which suggest that human labor will be displaced by robots in the coming years.

Instead, these systems are designed in such a way that complements human tasks and ensure optimum efficiency in the auto manufacture process.

In fact, in 2014, studies revealed that the use of robots enhanced human productivity by nearly 85 percent.

Most prominent automakers including BMW, Mercedes Benz and Ford, among others deploy cobots on their production floors to carry out myriad functions such as welding, car painting as well as assembly line activities.

Industry experts expect the technology to become even more beneficial in the future and bring about the obsolescence of the conventional “caged robot” concept at auto production facilities.

The first cobot that demonstrated great potential in working alongside human employees was developed in 2008 by Danish producer Universal Robots.

Dubbed UR5, this robot pioneered the age of user-friendly, economical and adaptable collaborative robots. This technology also enabled SMEs to bring about cost-effective and efficient automation of their facilities.

Through this discovery, Universal Robotics has retained its position as a leader in the automotive robotics industry, with higher cobots sales than all other competitors.

As is the case with any emergent technology, cobots faced considerable pushback at first, particularly from the manufacturing sector.

This was due to the fact that most factory managers were skeptical about the integration of these technologies into the working environment, despite considering the products as technological marvels.

The collaborative robots market has broken through these barriers however, and is poised to accrue significant gains in the years to come. In fact, the industrial cobots market is set to reach nearly $3 billion in global revenue by 2020.

What is on the horizon for the automotive robotics industry?

Even as cobots continue to gain traction in the present scenario, there are still certain challenges that pose a hindrance to the implementation of these systems in major manufacturing plants.

One of these is the requirement for fine dexterity, for instance for picking up and handling delicate or small parts.

In order to overcome these hurdles, market leaders are working towards creating robots that feature integrated vision systems and faster processors.

These features will allow modern cobots to work around the obstacle and adapt to a change in the environment, without simply stopping their action, as is the case with traditional robots.

Cobots presented by Realtime Robotics at the Automate 2019, for instance, have an integrated vision system that enable them to adapt to changes in their environment, including varying types of obstacles and variations in the original position of the object that is to be picked up and the final location where it will be dropped off.