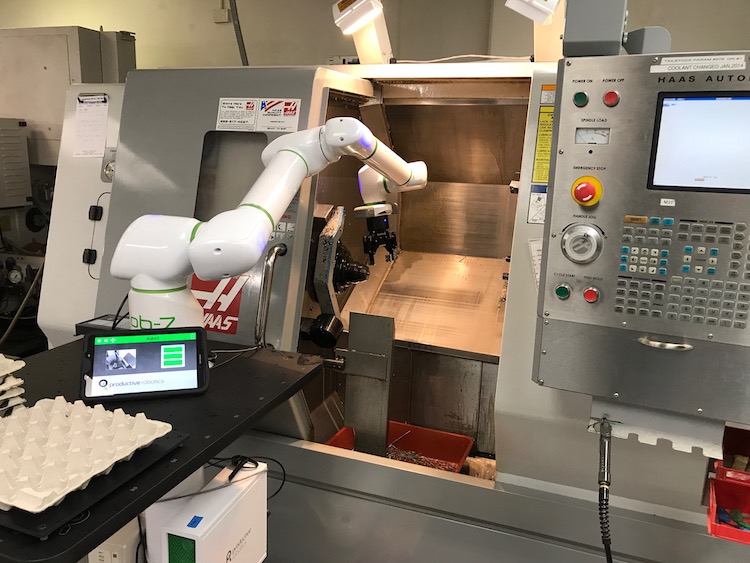 Productive Robotics has launched updated software for its range of OB7 collaborative robots, adding “more than 50 features” to the system.

The company says the software update enhances OB7’s connectivity, allowing for efficient integration with other equipment and for easily accessible status monitoring.

Zac Bogart, president and CEO of Productive Robotics, says: “Productive Robotics has been an innovation leader in collaborative robotics developing next-generation technology to differentiate itself in the market.

“With this new software launch we are setting the technology bar even higher as we maintain OB7’s position as the smartest, simplest to use and easiest to deploy cobot on the market.”

These software updates “further support teams in their ability to easily and quickly set up and operate the OB7 with minimal outside assistance”, says Productive Robotics.

The monitoring and alert features add value to OB7’s “lights out” operation as well.

Businesses using OB7 enjoy even more peace of mind knowing that, even when there are no employees on site, these features allow them to check in and receive notifications if any issues arise.

The Santa Barbara, California-based cobot designer and manufacturer has three models on the market – OB7, OB7-Max 8 and OB7-Max 12.

All are equipped with the same “no programming”, simple-to-teach intelligence.

The user simply shows OB7 how to do the job and OB7 learns, providing customers with complete ease of use.

OB7 offers ultimate flexibility thanks to its seventh axis. Like a human arm, seven joints “give OB7 the flexibility and dexterity to reach around objects or obstacles where others cannot”, claims Productive Robotics

Unlike a human arm, each of OB7’s joints can rotate 360 degrees in both directions allowing the cobot to work in more confined workspaces and areas that a six-axis robot can’t reach.