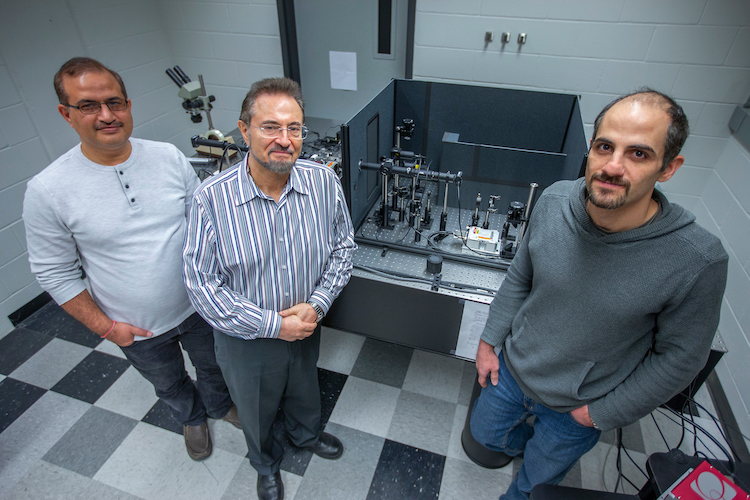 Scientists at Iowa State University have developed new nanoscale technology to image and measure more of the stresses and strains on materials under high pressures.

As the researchers reported in the journal Science, that matters because, “Pressure alters the physical, chemical and electronic properties of matter.”

Understanding those changes could lead to new materials or new phases of matter for use in all kinds of technologies and applications, said Valery Levitas, a paper co-author and Anson Marston Distinguished Professor in Engineering at Iowa State University, the Vance Coffman Faculty Chair and professor in aerospace engineering.

Development and demonstration of the technology is described in a paper, Imaging stress and magnetism at high pressures using a nanoscale quantum sensor, just published by Science.

The lead author is Norman Yao, an assistant professor of physics at the University of California, Berkeley. Iowa State’s Mehdi Kamrani, a doctoral student in aerospace engineering, is also a co-author.

The paper describes how the researchers fit a series of nanoscale sensors – they call them nitrogen-vacancy color centers – into diamonds used to exert high pressures on tiny material samples.

Typically, those “diamond anvil” experiments with materials squeezed between two diamonds have allowed researchers to measure pressure and changes in volume.

The new system allows researchers to image, measure and calculate six different stresses – a much more comprehensive and realistic measure of the effects of high pressure on materials. The new tests also allow researchers to measure changes in a material’s magnetism.

Levitas says: “This has been one of the key problems in high-pressure science. We need to measure all six of these stresses across a diamond and sample. But it’s hard to measure all of them under high pressure.”

Levitas’ lab has done unique experiments by putting materials under high pressure and then giving them a twist, allowing researchers to drastically reduce phase transformation pressure and search for new phases of matter, which may have technological applications.

The lab also does multiscale computer modeling for high-pressure diamond anvil experiments – Levitas says it’s the only lab in the world doing such simulations.

He said that experience with high-pressure simulations was why he was invited to collaborate with Yao’s sensor project.

Simulations made it possible to reconstruct fields of all six stresses in the entire diamond anvil, where they could not be measured, as well as verify experimental results. Levitas plans to use this sensor in his lab.

The sensor enables “pursuit of two complementary objectives in high-pressure science: understanding the strength and failure of materials under pressure (for example, the brittle-ductile transition) and discovering and characterizing exotic phases of matter (for example, pressure-stabilized high-temperature superconductors)”, the researchers wrote in their paper.

The nitrogen-vacancy sensing technology described in the paper has also been used to measure other material properties – for example, electric and thermal characteristics.

The researchers wrote it “can now straightforwardly be extended to high-pressure environments, opening up a large range of experiments for quantitatively characterizing materials at such extreme conditions”.