The growth of industrial robot revenues slowed in 2019 but is forecast to pick up again towards late 2020 and accelerate in 2021, according to new market research from Interact Analysis.

The market intelligence firm released a new market report focusing on the industrial robot market which outlines reasons to be positive in the sector, despite an immediate, short term decline in revenues.

The report goes into detail around specific headwinds that have challenged growth within the sector, including the slowing global economy, trade wars and uncertainty in the global automotive industry.

Compared to 2017, where revenues associated with industrial robots increased by 20 per cent, forecasted declines of 4.3 per cent in 2019 have caused some concern.

Jan Zhang, research director at Interact Analysis, said: “Automotive and smartphone production declines play a significant part in this downturn. As the largest end-user segment for industrial robots – accounting for over 30 per cent share of revenues – any downturn in this area is always keenly felt in automation and robot investment. 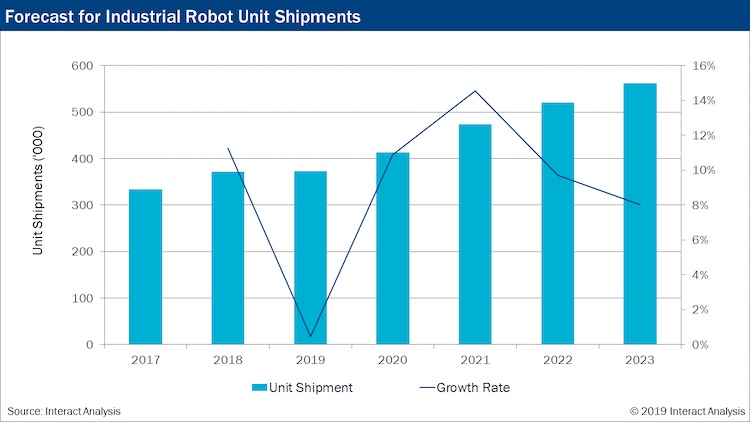 “Despite this, however, there are reasons to be optimistic. Long term drivers, both for industrial robots and for automation as a whole, remain very strong. Growth is expected to pick up on 2020, and then accelerate further in 2021 due to new industry applications, lower prices and wider use cases.”

The report’s findings, based on interviews with all leading robotics companies, as well as a wide selection of innovative robot start-ups, system integrators and component suppliers, highlight the importance of new robot types in fuelling this growth.

In particular, cobots – collaborative robots – which work alongside humans are finding favour in industries not traditionally associated with the use of robots. Among those industries identified are food and beverage, logistics, packaging and life sciences.

Zhang says: “Growth in these industries can’t fully compensate for the decrease in the automotive industry, but it does warrant optimism for the future.”

A central element to the report’s findings is the impact China is having on the global industrial robot market in 2019.

While Japan remains the largest producer of industrial robots, with an estimated 45 per cent of total production, there has been significant growth in production capacity and output in China.

This can be attributed a number of factors, including Chinese vendors entering the market and inward investment from traditional industrial giants like ABB, Fanuc, Kuka and Yaskawa.

Zhang says: “While it is true growth of industrial robot revenues has slowed down, the reasons for this are clear and, for the most part, beyond the control of the vendors.

“Despite this, however, there is evidence that the industry is diversifying and putting the foundations in place for significant future growth, making this one of the more exciting spaces to operate in.”